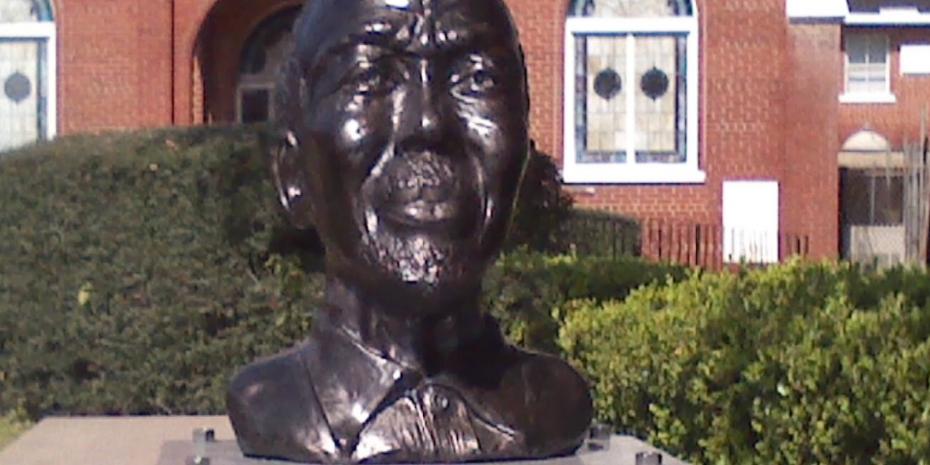 Africatown, AL -- Supporters and friends of the Africatown community recently took it upon themselves to replace two historic community treasures that were removed or destroyed more than twenty years ago. Two historic institutions of the community - the Union Missionary Baptist Church of Africatown and the Mobile County Training School Alumni Association - worked together to replace the bust of Cudjo Lewis and the treasured Africatown freedom bell.

Led by Pastor Derek Tucker, the Union Missionary Baptist Church commissioned Ms. April Livingston to sculpt a new bust of Cudjo Lewis to replace the one destroyed more than twenty years ago.

This one is much better. It looks more like the pictures of Cudjo Lewis that the world has been viewing for years. The bust sits on it's foundation at the entrance of the Union Missionary Baptist Church on Africatown Boulevard (Old Bay Bridge Road) in Africatown. Funding for the project was raised via a crowd funding project.

Cudjo Lewis was also a member of the last shipment of slaves to be imported to America, arriving in 1860. He died in 1935, the longest living of the group, which was brought to this country against their will. That group of former slaves eventually started the Union Baptist Church, which was the first church in Africatown. A formal dedication of the new Cudjo Lewis bust was held in January of this year and attended by hundreds of people, including the media and out-of-towners.

In the spring of 2016, President Flen declared to the Alumni Association, "We will purchase a new bell to replace the one taken from the community and stop relying on someone else to do our job for us."

A committee was formed and shortly afterward a new bell was purchased. An informal dedication of the new bell was made during reunion weekend in November 2016. The Bell and Brick Committee is currently building a foundation for the bell in the school's flagpole area.Once the foundation is complete and the new bell firmly secured, a formal dedication ceremony date will be announced.

The Africatown Freedom Bell was first placed in the Union Baptist Church, where the original school started. It was then moved to the Mason's Hall when the school moved there and eventually ended up at the current site on the campus of the Mobile County Training School. The land where the Mobile County Training School is located and the original Whitley Elementary School was located was given to Mobile's Public School System by descendants of that last shipment of slaves to enter this country.

The bell originally rang on campus to signal the beginning of school and the end of the school day. After the automatic school bell was installed, it rang after victories of the school's sport teams. Ringing of the bell was eventually reduced to where it only rang after County was victorious after the annual Thanksgiving Day Classic between Mobile County Training and Central High School.

The Africatown natives, friends and supporters have decided that they are no longer going to sit back and wait for someone else to do what they have been elected to do for the community. The community has a plan and is going to do what they can to make sure that plan is carried out. It is well known that the community only has a small number of registered voters however, the historical significance of the community and the school would dictate that the residents of Africatown should not be ignored and should be treated fairly.

Members of the Union Baptist Church and alumni of the Mobile County Training School are to be commended for replacing the Cudjo Lewis bust and the Africatown freedom bell, two historic landmark treasures missing for over twenty years.

Had I been an elected official representing the Africatown community on the local, state or national level twenty years ago, I would have dug deep into my own pockets to make sure those items were replaced and started an investigation within the school system to find out what happened to the bell. We all know that underserved communities will put a person in office and expect for them to be both an elected official and a community leader. The problem is most people elected are not leaders.

New sidewalks, a walking trail and the replacement of the Cudjo Lewis bust and Africatown freedom bell are just a sample of things to come in Africatown. It might take a few years, but if Mobile's Chamber Of Commerce will stop trying to rezone Africatown with heavy industries, the community will rebuild and grow the community and school into an area of African-American culture and renaissance for all the world to see.