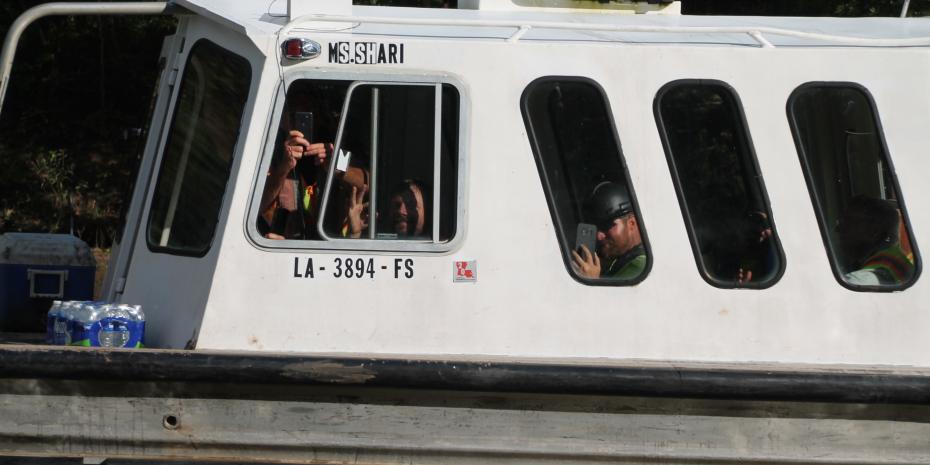 The gesture, once known in the U.S. primarily as the “okay” symbol, has been increasingly linked to the alt-right and white supremacists.

Above: A Bayou Bridge construction worker (second from the left) flashes a controversial symbol linked to white supremacy. (Photo by Karen Savage)

“Since day one we’ve known Energy Transfer Partners has no regard for black or brown communities. They terrorized Indigenous water protectors at Standing Rock and here in Louisiana they’ve failed to consider the impact their pipeline will have on the predominantly black community of St. James, which still doesn’t have an evacuation route,” said Foytlin.

"This is a multi-billion dollar company - money isn't preventing them from protecting the people of St. James, it's the color of their skin," she said, adding that she’s also witnessed white supervisors for the company resting in the shade while black and Latino employees are working.

The Bayou Bridge pipeline is part of a larger project intended to connect Energy Transfer Partners’ Dakota Access pipeline in North Dakota to refineries in St. James Parish and nearby export terminals.

Energy Transfer Partners and Spartan Directional did not immediately respond to requests for comment.

Prominent alt-right figures who have flashed the symbol include Milo Yiannopoulos, who made the gesture while wearing a “Make America Great Again” hat in front of the White House in March 2016 and Richard Spencer, who posed in front of a Trump hotel while making the gesture on election night.

In 2017, users of the web forum 4chan created what was intended to be a hoax, telling members to deploy “Operation O-KKK”, with the goal being to promote the use of the symbol as a sign of white supremacy to troll – or try to get a reaction from – liberals.

The Anti-Defamation League, which tracks hate and hate symbols, initially attributed the gesture’s evolving meaning to the hoax. Although the gesture is not included on their list of hate symbols, the ADL updated its view earlier this month.

“Use of the 'OK' gesture has spread beyond the far right and can now also be found within the broad community of mainstream Donald Trump supporters—some of whom seem to have no idea of its origins,” said the ADL in a blog post.

“We are changing [our view on the gesture] to reflect its evolution since its origination but also to stress that it is not a reliable signifier and no one should assume anything about the use of such a gesture unless there are other unmistakable white supremacist signifiers in that context as well,” said Mark Pitcavage, a senior research fellow for the ADL in a recent tweet.

Still, organizations often quickly distance themselves from those who use the gesture.

A member of the U.S. Coast guard made a similar gesture in the background of an MSNBC interview on Friday. During that incident, a Coast Guard officer appeared to look directly at the camera, flashed the controversial gesture, then looked away.

The Coast Guard quickly apologized and removed the individual from the response team, stating that “his actions do not reflect those of the United States Coast Guard”.

In another recent incident, Republican Zina Bash appeared to flash the gesture during confirmation hearings for President Trump’s Supreme Court nominee Brett Kavanaugh. Bash has denied her gesture had anything to do with white supremacy.

In Alabama, four police officers were suspended in July after flashing the sign in an official photo.

Foytlin said while she finds the gesture offensive, the bigger issue is the pipeline company's actions.

“Last week Energy Transfer Partners sent thugs to brutally attack and arrest us on land where we had permission to be. At Standing Rock they sent mercenary security forces to shoot people with rubber bullets, to hit them with water cannons in freezing 23 degree temperatures,” said Foytlin. “The reality is that this gesture actually does represent Energy Transfer Partners.”