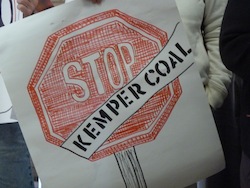 On Monday, February 14th, the Sierra Club took Mississippi Power’s proposed lignite coalmine and power plant to court, as part of its ongoing attempt to stop the project from being built.

In a morning press conference, the environmental group and a diverse range of residents and advocates voiced their opposition to the project, calling it “dirty, expensive, and unnecessary.”  They said residents of south Mississippi simply cannot afford the $2.4 billion project, which is expected to bring a 48% rate increase to Mississippi Power's residential consumers.

Rose Johnson, founder of the North Gulfport Community Land Trust, and former head of the Sierra Club’s Mississippi Chapter, spoke about the impact the project would have on the African American community of North Gulfport, “My opposition arises from the numbing and debilitating effect that a 48% rate hike would have on my community and its citizens…  Many are struggling to make ends meet… The last thing they need… is an unnecessary, expensive, $3 billion coal plant.”

Byron Johnson spoke to the impact such a dramatic rate hike would have on local business. “We will not be able to survive a [rate] increase,” he said of the two Gulfport restaurants he owns.

The project, slated for Kemper County, was initially rejected by Mississippi’s Public Service Commission, which cited its “unprecedented risk” and expense to ratepayers.  But then the Commission reversed its decision, granting a certificate the project needs to move forward.

Sierra Club, through its attorney Robert Wiygul, argued that this “flip-flop” decision is arbitrary and not supported by the Commission’s own findings.  They say that the Commission must justify its decision with more substantial evidence that the project is in the public interest, or stick with its earlier decision and not grant the certificate at all. 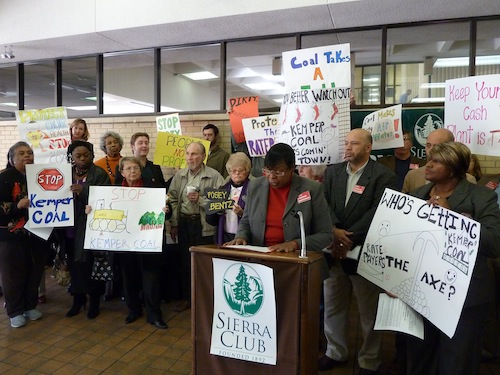 Rose Johnson and other residents, business owners, advocates, and elected officials from the Mississippi Gulf Coast spoke out against the Kemper County power plant at the Harrison County Courthouse on Monday. Photo by Ada McMahon.

Wiygul said that the Commission failed to explain how these, and a total of eleven risks it initially identified, were no longer of concern.   Through his questioning, Chancery Court Judge Jim Persons appeared to have similar concerns, saying that the Commission did not address whether ratepayers will be able to afford a 48% increase in energy bills.  The Judge said he will make his decision within two weeks.

Mississippi Power’s attorney Ben Stone argued that diversifying Mississippi's energy sources with lignite coal would be cheaper for the ratepayer, pointing to the volatility of natural gas prices.  But he failed to offer specifics to counter the claim that rates would rise by nearly half for Mississippi Power customers.

Passing this “unprecedented cost” off on ratepayers is enabled by a 2008 Mississippi law, which allows power companies to pay for plants before they are built through rate increases, rather than paying for upfront costs themselves or through private investors.

In addition to rate increases, which would begin in 2014, opponents have concerns about the environmental and human health impacts of lignite coal mining. The Sierra club says the Kemper County project would displace hundreds of residents, strip mine 45 square miles, create a five hundred acre dump for toxic ash, and emit mercury into streams, wetlands, and neighboring communities.