A History of Violence: The BP Oil Spill Trial 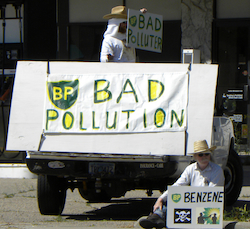 Last week, U.S. District Judge Carl Barbier decided that in the civil trial against BP for their oil disaster in the Gulf of Mexico, the oil company’s history of accidents and poor safety records won’t be admissible as evidence. Maybe that’s appropriate; I’m no legal expert so I can’t make that call. I asked Loyola law professor Blaine LeCesne, who specializes in torts and Louisiana civil procedure, about it and he said that it “was absolutely the correct ruling,” especially in terms of streamlining the case for trial -- and the trial is what everybody wants to see, except BP.

But here are some key points in BP’s spotty oil operations history that we’ll be missing out on if the case goes to trial, from the Times-Picayune:

Barbier's ruling covered materials largely referring to three incidents where BP's process safety program "arguably failed," including the Texas City explosion; a series of accidents in 2000 at BP's Grangemouth, Scotland, petrochemical facility; and a 2006 rupture of a corroded pipeline at Prudhoe Bay, Alaska.

Even if this is legally correct, or even normal, it’s still a shame that BP’s mammoth disaster gets the privilege of being viewed in isolation. One would hope that a history of accidents could be visited if only to reveal a cycle of abuse to the environment. PBS Frontline and ProPublica did an excellent job of revealing BP’s cycle of “deadly accidents, disastrous spills and countless safety problems,” all of which tell the narrative of a culture at BP that placed little priority on safety.

But what if, hypothetically, BP's disaster in the Gulf was viewed as an act of domestic violence, as opposed to just a problem of pollution and corporate irresponsibility? After all, corporations are treated as people for political campaigning and lobbying, and so many of BP's disasters have reached far into our homes, leaving devastating impacts on families and workers.

In domestic violence civil lawsuits, the abuse history of the defendant can be deemed relevant, and judges often allow this as evidence. If a woman is killed by her estranged spouse, I would hope we can consider a history filled with protective custody orders, past arrests for assault and battery and even the defendent’s mental health records. As stated in Anne L. Ganley’s “Understanding Domestic Violence”:

“Domestic  violence  is  never  a single isolated incident.  Rather, domestic violence is  a  pattern  of  behavior,  with  each  episode  connected  to  the others. Many times, as the pattern of  abuse evolves, the level of  seriousness escalates. In the most unfortunate instances, the consequence of  domestic violence is homicide. By allowing evidence of  past specific incidents  of  abuse in  domestic  violence cases, courts  could help to prevent  this escalation.”

Of course, it’s difficult to compare BP to an abusive partner. It's a corporation driven by profits, not fits of rage. Their blunder is owed more to poor decision-making, and at worst pure negligence. But what’s relevant are the patterns, the escalation of seriousness and the consequence -- in BP’s case, 11 oil rig workers killed in the accident, thousands of dolphins, pelicans, seafood, businesses and birds, not to mention all the people who've become ill and are struggling financially since the disaster.

I talked to Tulane law professor Ed Sherman about the domestic violence analogy and the inclusion of a defendent's history in a civil trial like this. He said "there certainly are situations where past misconduct is allowed into evidence," in domestic violence cases as well as cases involving corporate behavior and safety records. He cautioned that the facts of the history would need to be relevant to the facts of the current case. The National BP Oil Spill Commission pointed to shortcuts BP took that led to an otherwise preventable disaster, and described the problems as patterns that reach historically and across the oil industry.

"If dramatic steps are not taken," said the Commission's co-chairman Bob Graham at the release of their report, "I'm afraid that at some point in the coming years another failure will occure and we will wonder why did the Congress, why did the administration, why did the industry, why did the American people allow this to occur again?"

If the focus is now on prevention, one would hope that BP’s history would be admissible just for accountability’s sake. No company as big as BP should be afforded the luxury of thinking they can eff up and their past not be brought up. If New Orleans chief of police thinks that the criminal history of a victim of violence is relevant, then surely we can consider the criminal history of the perpetrator of violence.

While on that, I would hope the judge in the BP trial considers the history of the victim: the Gulf of Mexico, and Gulf Coast residents. There are few bodies of water and coastal residents who have sustained the level of abuse than the Gulf’s: pollution, irresponsible oil and gas extraction procedures, nutrient runoff, constant oil spills and leaks. It seems that it’s with the victims where history matters the most. Of course, you can’t talk about that history without talking about who the abusers are, and BP is all up in that discussion.

Cherri Foytlin said it best in her recent Bridge the Gulf blog:

It is in the discovery phase of any trial that the truth has hope of being revealed, and any justice ever served was prepared on a plate of truth.

This may not all matter if there is a settlement. But anywhere that there is a history of violence is where a plate of truth and justice is best served. Poor folks in New Orleans and across the Gulf who are the victims and the accused of crimes don't have the luxuries of BP to have their histories buried. That is evidence alone that there is inequity in the justice system.

What do you think? Should BP's history of accidents and safety violations be admissible in their upcoming trial?