As Midwest and Midsouth communities mourned and regathered from tornados that claimed at least 30 lives and billions in destruction Friday night, Judge Carl Barbier announced a settlement between oil giant BP and thousands of individuals and businesses that lost money due to the Deepwater Horizon oil disaster. BP is estimating that this portion of the settlment will cost a little less than $8 billion. Howerver, the actual settlement is an "uncapped amount," reports David Hammer for the Times-Picayune.

Those settling in this group are not only fishermen put out of work and businesses that lost customers, but also those who were exposed to BP oil in the emergency clean-up efforts, and people exposed to the unprecedented amount of dispersants applied to break up the oil from the Gulf of Mexico's surface. This comes as a surprise since BP rarely acknowledged health problems possibly connected to the oil disaster, and Gulf Coast Claims Facility administrator Kenneth Feinberg declined to honor claims brought by Gulf Coast workers and residents seeking financial remedies for healthcare costs.'

"It's a start,” says former clean-up worker Robert Dortch of Lucedale, Mississippi.  “Any kind of process doing something for the people that was out there amongst the [oil and disperants] is good."  Like many in the Black community in Lucedale, Dortch saw the BP disaster as an opportunity for steady work and took a job doing clean-up.  He spend two months in a “detox” center where he sprayed oil off of absorbent booms, seven days a week.  He said workers at the center didn’t have proper equipment, and “all that oil fume and stuff was beaming up in us, under our Tyvex.”

According to The Washington Post, part of BP's settlement is $105 million for health problems in the Gulf Coast.

"This healthcare outreach program would be available to all individuals in those communities, regardless of whether they are class members.  It would include expanding capacity to address community health needs, including primary care, mental health services and access to environmental health specialists, as well as enhanced training and education related to Gulf Coast health issues."

A press release from the Plaintiffs Steering Committee further details the scope of the health benefits in BP's proposed settlement:

The Medical settlement will potentially benefit hundreds of thousands of Gulf Coast residents and Clean-Up Workers who suffered acute or chronic illnesses from exposure to oil and chemical dispersants in the weeks and months after the oil spill.  Residents in the coastal and wetlands areas of Louisiana, Mississippi, Alabama and the Florida Panhandle will be compensated for a broad range of specific medical conditions such as respiratory, skin, stomach, headaches and a host of other ailments.  At one end of the spectrum, Clean-Up Workers can submit a claim with a Declaration under penalty of perjury describing the conditions or symptoms after exposure even if they did not seek medical treatment at the time of exposure.  At the other end, residents and workers who suffer chronic symptoms or conditions from exposure will be required to submit medical records from the time of exposure and for ongoing medical care. Coastal residents and Clean-Up Workers who experience future manifestation of illness retain the right to sue BP without proof of liability for the spill and exposure.

The settlement also establishes a periodic medical consultation program for 21 years for people affected by the spill to ensure access to appropriate healthcare throughout the Gulf Coast region.  A grant of more than $100 Million will be used to establish a 5-year program to enhance access to physical and mental health care services in the Gulf Coast region—with an emphasis on integrated and sustainable community-based primary and mental health care and environmental and occupational health services.  These services will benefit families in the entire region for years to come.

Kindra Arnesen, a resident of Buras, Louisiana, is concerned about the onus placed on Gulf Coast residents to prove that they are in fact suffering.

Says Arnesen: “One of the biggest problems we've had is getting physicians to actually diagnosis people with chemical exposure… It's a burden of proof issue again.  It's really hard for me to say that they are going to be paying these medical claims when a lot of people have not been diagnosed yet.” 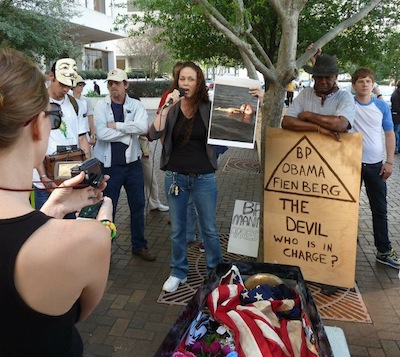 Arnensen and her husband and young children have experienced a variety of symptoms since the disaster began, including infections, respiratory illnesses, headaches, and rashes.  The BP disaster turned her into an advocate, and she has been vocal about the need to treat people made ill from the toxic exposure.  Arnesen says she is somewhat excited that medical issues are at least being acknowledged by BP,  and that "Some of the political pressure and public pressure may have played a role" in the settlement including funding for health care.

Even so her assessment of the settlement announcement is: ”I'm still not satisfied.”

“It just kills me that they've done this settlement when there hasn't been a proper amount of time to assess the situation.  I don't trust it.  It doesn't allow for discovery for all the information to come out.”

While the true settlement is uncapped, BP is convinced that the cost to them won't be more than $37.5 billion. It just so happens though that they are suing Transocean for $40 billion for their part in the disaster. If BP won that dollar-for-dollar, they would in essence recoup not only all the money they plan to pay out, but would grab a few extra billion for the road. They've already settled with two other parties.

Law professor Blaine LeCesne tells Bridge the Gulf that the settlement provides BP some cover by getting the PSC to side with them against the other defendants. Says LeCesne:  "[the settlement] changes the litigation strategy of the PSC, which has been assigned BP's cross claim interests against the other defendants, namely Transocean and Halliburton. Consequently, if there is a trial, you will see the odd situation of BP and the PSC jointly pointing the finger of blame at Transocean and Halliburton, which was BP's strategy all along."

Meanwhile, plaintiffs attorney Mike Papantino told The Washington Post that "everybody should be” happy with this settlement. Really?

Ask Robert Dortch if he's happy. He's lost 25 pounds in the last few months, and worries it’s because of his exposure to toxins as a clean-up worker. He still needs to be tested and treated. What’s worse, he fears he contaminated his wife and children by doing laundry in the family washing machine.

“That started a chain reaction with my wife.  She started having seizures.... It really took a lot out of our family.  Mentally it has really wrecked us…"

Glenda Perryman is a community organizer with the Immaculate Heart Community Development Corporation in Lucedale, Mississippi, and since the spill has been working with Dortch and other clean-up workers for medical care.

Said Perryman: “Lucedale folks want treatment, and want health – both mental and physical – for themselves and their families. A settlement: Is it for the people? Will it support all workers in Gulf region or will they pick a few and say they’re done?"

LeCesne says plaintiffs should still hold out for "top dollar." Why?

"Because if this oil spill was, as the evidence suggests, caused by greed, BP cannot risk that fact coming out in a trial."

Photos – Top: A sign at a rally in New Orleans calling for a fair trial of BP.  Bottom: Kindra Arnesen speaks at that same rally, 2/29/12.