The 2 year BP anniversary has passed. What now? 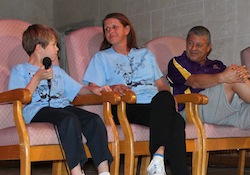 The second anniversary/memorial of the BP Deep Water Drilling Oil Disaster has come and gone.  It was awesome to see events held in every Gulf state in commemoration. So many good people coming together to pay their respects to the 11 fallen, and to stand in protection of our people, wetlands, fisheries, beaches, sea life, cultures and waters.

I don't know how it feels for everyone, but for me the days between April 20 and Earth Day, April 22, seem to be bittersweet. My emotions tend to run the contradictory gambit of remembering, in slide show form, all the loss from and since the spill – and along with them that too familiar feeling of bereavement, and the recognition of the historic regional example that we have collectively given to the nation of relentless survival and hope.

Either way my eyes tend to dampen.

Have longer years ever existed?

To me the most pivotal part of the weekend's activities came during a town hall meeting held at the First Universalist Unitarian Church in New Orleans. There people came from several Gulf states to learn breaking information from our more seasoned vets and local experts, to share with each other the needs of our diverse communities and most importantly, I believe, to chronicle our battle scars.

Photo: Darla Rooks and Dean Blanchard watch as Rooks' grandson tells of getting sick, at the town hall meeting in New Orleans. Photo by Cherri Foytlin.

I wholly consider the crux of the Gulf Coast-based movement for truth, to be encompassed in the stories of those to whom have been affected. Additionally, as I have repeatedly been told - through under table whispers by people within state and federal agencies and late night hotel room strategy sessions with environmental and social justice “elders,” putting those stories in the hands of the court of public opinion, the American and global population, is the only way to acquisition justice.

That was the great gift the Gulf received this anniversary. More than a smidgen of fact based evidence and anecdotal veracity finally made it's way to the world-wide communal vision – known to us as the media.

Within the two weeks prior to the 2012 remembrance, Gulf issues have finally again stuck to the spider web of connections regarding this disaster and the public perception.

•    the heavy metals found in oysters, from the California Academy of Sciences - http://www.eurekalert.org/pub_releases/2012-04/caos-sfh041812.php

•    the purveyance of truth by Gulf leaders - http://www.bridgethegulfproject.org/node/608.

The last point is mainly due to the great work of our coastal brothers, Bryan Parras and Derrick Evans, who traveled 5,250 miles (give or take) across the big pond to make a stand at the BP shareholders meeting.

Side by side they stood along with representatives from communities around the world who have suffered at the hands of this unethical and deceptive corporation. Their voices rang not only through English communications, and across our nation.

The former, well, that falls to every one of the citizen guardians who have been tirelessly investing their time, resources and courageous action-based deposition, to bird dog the devastating and continuous affects of the disaster on our precious people and ecosystems (psst, that means you!).

Through your authentic voice, and that of the many powerful and unyielding non-profit organizations and citizens initiatives, we have made substantial gain in the defense of our region and national treasure – the Gulf Coast.

One must note the amazing and timely efforts of so many, including:
•    the human health report released by Louisiana Environmental Action Network - http://leanweb.org/our-work/water/bp-oil-spill/results-of-the-louisiana-environmental-action-network-lean-survey-of-the-human-health-impacts-due-to-the-bp-deepwater-horizon-disaster and their sea foam results, found here http://www.leanweb.org/our-work/water/bp-oil-spill/sea-foam-contains-pah-s-two-years-after-oil-spill,
•    an ecosystem overview provided by the National Wildlife Federation - http://yubanet.com/usa/National-Wildlife-Federation-Report-A-Degraded-Gulf-of-Mexico.php
•    undaunting outreach by Gulf Restoration Network, http://www.youtube.com/watch?v=o3AIQXEJMU8&feature=player_embedded,
•    the outstanding citizens based report by the Institute of Southern Studies, in collaboration with Bridge the Gulf and the Gulf Coast Fund for Community Renewal and Ecological Health – http://www.southernstudies.org/2012/04/troubled-waters-gulf-communities-still-reeling-two-years-into-bp-disaster.html
•    and many more initiatives and events from the Louisiana Bucket Brigade, the Alabama Oil Spill Aftermath Coalition, Gulf Change, the Gulf Future Coalition, Galveston Baykeeper, Turtle Women Rising, the community of Grand Isle, Mobile Baykeeper, the Barataria Terrebone National Estuaries Program and many more.

Nothing compares to your commitment to shine a laser light on the cacophony of BP-paid PR, to fight with conviction the denial of rectitude, and to stand in opposition of the profit-based, completely fabled, miracle epilogue presented to the American public.

Your citizen based response has been nothing short of a powerful national memoir comparable to the most righteous of historic human cries for equity.

Heck, the very fact that human health has been any part of settlement discussions serves as a volume of significant grassroots victory.

For the moment, I ask that you take note of all that we have accomplished. I assure you BP has taken regard as well. I doubt they knew what hit them.

That is why I must suggest to you that now is the time, like no other, to unilaterally keep the blows sharp and coming. To some degree, we have them on the ropes – retreat to corner is not an option we can afford to take.

To that task, we must now throw our support behind the above mentioned reports and ambitions – spreading them far and wide in both the cyber world, through education of authorities, and media outlets across the globe. Please share widely, through email, social media and personal contacts.

We ask that whenever you see a libelous BP commercial, you call the station or network being used as a false advertising vehicle and let them know, in no uncertain terms, how you feel about their co-dependent slight against truth and justice.

Further, if they continue to allow such a disrespect to American people, you will be forced to contact and immediately enact a boycott on all other advertising customers in their rolodex. Only through this type of currency based infringement will we begin to see an abatement in BP lies.

We ask that when you see a report telling the truth on national or local television, you call to thank them, ask for more truth telling features, and if you feel yourself qualified, give them information and contacts of which they may not otherwise have known.

Also, through the work of advocates traveling the globe sharing information and connecting with communities similarly affected by this corporation - including tar sands production, refinery worker deaths and other oil spill tragedies, it is imperative that we now grow our contingency to support and amplify the united voice.

Please watch the youtube video and vote for BP as the Greenwash Gold winner regarding their bought and paid for title of Sustainability Partner to our 2012 Olympics games, found here http://www.greenwashgold.org/index.php/bp.

Please support, and keep yourself abreast, of this growing endeavor to seek encompassing and lasting consideration of life over profit, clean air and water as a human right to all people, and a survivor based defense of our Mother Earth.

If we, as a people, can encapsulate the need for corporate conscience in this fight against the monster BP, then surely the repercussions will be farther reaching than we may ever be able to record.

In closing, I would like to personally thank you for your continuing support of coastal communities still being effected by the 2010 BP Deepwater Drilling Disaster.

You are significant to this fight.

You are valuable to this planet.

You are powerful in spirit, and courageous in conviction.

And you are so very appreciated by the millions of lives still suffering.