A Letter to Judge Carl Barbier on the Medical Aspects of the BP Settlement, by Dr. Michael Robichaux 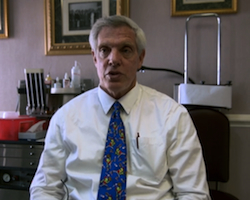 This letter was originally sent to U.S. District Judge Carl Barbier by Dr. Michael Robichaux on November 26th, 2012. Dr. Robichaux is a physician in Raceland, Louisiana, who operated a detox clinic for people who became ill after exposure to BP's oil and dispersant. Judge Barbier is presiding over the the class action settlement between BP and the Plaintiff's Steering Committee (PSC), which represents thousands of people and businesses harmed economically or medically by the 2010 BP oil disaster. BP and the PSC have proposed a settlement to Judge Barbier, who heard arguments for and against the settlement in November. Barbier must now decide whether to accept the settlement as final.

On November 7, 2012, I spent several hours in your courtroom listening to the testimony of members of the Plaintiff Steering Committee, BP and individuals who expressed opposition to the agreement between the respective parties as outlined in the Proposed Settlement submitted to you.

While I have no experience with the economic aspects of this settlement, I am intimately aware of the medical issues involving the people who I have treated and, in some cases, continue to treat, who were adversely affected by the Deepwater Horizon tragedy.

My dearest friend, LeRoy Hartley, is an attorney from New Orleans who possesses a Masters Degree in Admiralty.  He is not managing or advising on any cases in this matter and he was kind enough to spend the day with me in your courtroom.  LeRoy is a firm believer that you are an honest and honorable man and had predicted with uncanny accuracy many of the legal events that have been taken place in this matter over the last few years.

As you possibly know, I had expressed opposition to the medical aspects of the settlement, as the provisions of the agreement between BP and the PSC were TOTALLY different from the experiences that I had gained in evaluating and treating more than a hundred and fifty individuals who were rendered ill by exposure to chemicals associated with the Deepwater Horizon oil spill.

While I claim no special expertise in the management of these illnesses, I do have the experience of approximately 2,500 patient hours of “hands on” care of the 100 individuals we treated in our Detox facility in Raceland, Louisiana.

The one document in this matter that I found to be rather outrageous was the “SWORN DECLARATION” of PSC member Robin Greenwald and her and the PSC’s selection of symptoms to be considered as representative of the “Chronic Conditions” being suffered by the victims of the oil spill.

In reading her “Declaration,” I immediately questioned the conclusions of Dr. Michael Harbut, her medical consultant in this matter.  I had previously made a note to myself asking “how many of the victims of the spill has he actually seen, questioned or treated.”

If you will review the transcript of Ms. Greenwald’s testimony during the hearing, you will see that, according to Ms. Greenwald, Dr. Harbut did not see any patients, but rather relied on phone conversations with doctors he spoke to regarding this issue.

After hearing this comment, the question that immediately came to mind was, “who were those doctors?” Were they physicians, toxicologists or other individuals with special expertise in diagnosing and treating these type disorders?

From my vantage point, NO PHYSICIAN who actually saw patients with these disorders could have come to the conclusions reached by the PSC and BP on the “Chronic Conditions” being suffered by these very ill patients.

I would have written this note earlier, but I needed to do a statistical assessment of the 100 plus patients on whom I have records of their complaints from our detox facility. I have no secretary or assistant in this matter and I was disappointed that it took me so long to review and record this data.

Please understand that members of the Plaintiff’s Steering Committee represented many of the patients that I saw and treated in our Detox facility. The illnesses these individuals experienced and described to their attorneys should have been identical to the symptoms they described to me.

I abstracted the records of 113 patients to obtain the following data. (100 patients were treated in our clinic. The additional 13 patients either did not qualify for treatment or did not conclude their treatment regimes.)

The patient complaints are listed in the order of the frequency of their occurrence. The percentage of each complaint roughly correlates with the severity of the problems being experienced by the patients. The one glaring exception would be the issue of “Abdominal Pain.” Although less than 20% of the patients treated had complaints in this area, the pain that many of them suffered was quite severe.

Additionally, with the exception of one child, none of “Chronic Conditions” complaints were debilitating or prevented normal physical activities.

On the other hand, the neurological problems associated with headaches, memory loss, fatigue, etc. has forced many of my patients to rely on Social Security, Medicaid and other social programs to be able to survive their illnesses. Please remember that the majority of these patients were in good to excellent health and were experiencing normal lives before their exposure to these toxins.

Not included in the above “Symptoms” is the fact that many of the individuals who had exposure to the toxins released during the spill developed a condition known as  “Multiple Chemical Sensitivities.”

While many of the people we treated at our facility experienced amazing improvements in their symptoms, we were to later to realize that they often became ill once again when they returned to their home environments.

Two of my fishermen patients, a husband and wife team, had extraordinary results from their detox treatment.  When they returned home to resume fishing, the wife became extremely ill as soon as she began working on their boat.  Her husband resumed working and he too developed problems and has been unable to work since that time.

As a layperson discussing what is largely a legal issue, I am certainly at a disadvantage in making a case for my patients.  However, I do not see any other health professionals rushing to the aid of these victims, and I feel obligated to do the best that I can to assist them with their dilemma.  The irony of this situation is that while I am a physician traversing the legal universe, the attorneys in this situation have decided to play doctor and to make decisions based on symptoms that are significantly less common and less serious than those that actually exist.

The decision to select these less serious problems as the only “Chronic Conditions” that could be compensated under this agreement creates several major injustices.

The first problem is the fact that the major illnesses affecting these individuals are not included in the compensation schedule.

The second problem involves the fact that there will NEVER be any acknowledgement in the public record that these more serious illnesses actually exist.

While this is certainly advantageous to BP, failure to recognize these other medical problems also compromises any future situations where similar issues are encountered.  The de facto standard established by acceptance of this agreement will create the illusion of “non-existence” of these very serious illnesses and will be an injustice to not only the current victims of this tragic event, but it will also adversely affect any future victims of similar crises.

It is my impression that members of the PSC represent a large number of people affected by this disaster.  One of the firms that represents a sizable number of fishermen sent out notices to their clients suggesting that they (the client) stay in the class action pool.

This creates a dilemma for these clients.  The maximum compensation available to them will probably be in the $60,000 range.  However, that remains to be seen, as many of these individuals who are severely affected by this dilemma are not experiencing the far less significant symptoms that qualify for compensation.

Another dilemma is the fact that many of these patients will be affected by their disease for the rest of their lives.  How can $60,000 come even close to compensating these people for an illness that has completely disrupted their lives and will affect them for as long as they live?

The next question that begs for an answer is “what are the PSC attorneys going to do with their severely affected clients?”  Did they convince all of them to stay in the Class Action Lawsuit, or do they still represent their clients who decided to file individual actions for their illnesses?

The PSC attorneys have already acknowledged, by virtue of their rejection of the truly serious problems in the BP-PSC agreement, that these more serious problems do not exist.  How will they justify including these illnesses in their pleadings when they have previously undermined their representation of their clients by entering into their agreement with BP.

The bottom line in this matter is that acceptance of this agreement with BP will create a permanent document that ignores the most serious aspects of the illnesses created by exposure to chemicals from the Deepwater Horizon oil spill.

Those individuals who are now, and will probably continue to be, severely handicapped by their illnesses will have to rely on public assistance to survive.

The fatigue, memory loss, irritability and headaches have rendered several of these individuals disabled and many of these previously healthy patients are unable to work and some have already qualified for Social Security benefits and Medicaid.

For the last 2 1/2 years my wife and I have been involved on a non-stop basis in an efforts to assist the victims of this tragic event. I do not stand to benefit in any manner from the issues that I have chosen to champion, and I wish that my patients and friends had far better care and representation than I am capable of providing for them.

I have never recommended any legal course of action to my patients other than to seek legal consultation, as these issues are certainly out of my area of expertise.

It appears that the interests of a large, foreign corporation has superceded the needs of thousands of Americans who reside along the coast of the Gulf of Mexico. Equally as important to me, as a physician, is the fact that this settlement will result in a permanent record that completely ignores the truly significant illnesses that have resulted from this tragic event.