On June 1, a week past her 31st birthday, civil rights activist Catrina Wallace was sentenced to fifteen years in prison. 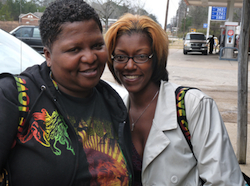