Tuesday, Sept 14th - Over the past three days, local fishermen in Bayou La Batre, Alabama have been documenting a thick sludge that has emerged in the water along their shores.  They say it must be caused by the BP oil disaster, and they all independently described it the same way: “I’ve never seen anything like it in my life.”

The sludge appeared on Sunday, September 12th, as a thick layer “like peanut butter” lining the back of the State Docks in this small fishing town on the Alabama Gulf Coast.

One fisherman, who requested anonymity for fear that some fellow fishermen would hold it against him if their waters were closed to fishing, took photos and sent them to a local organization, the South Bay Communities Alliance. 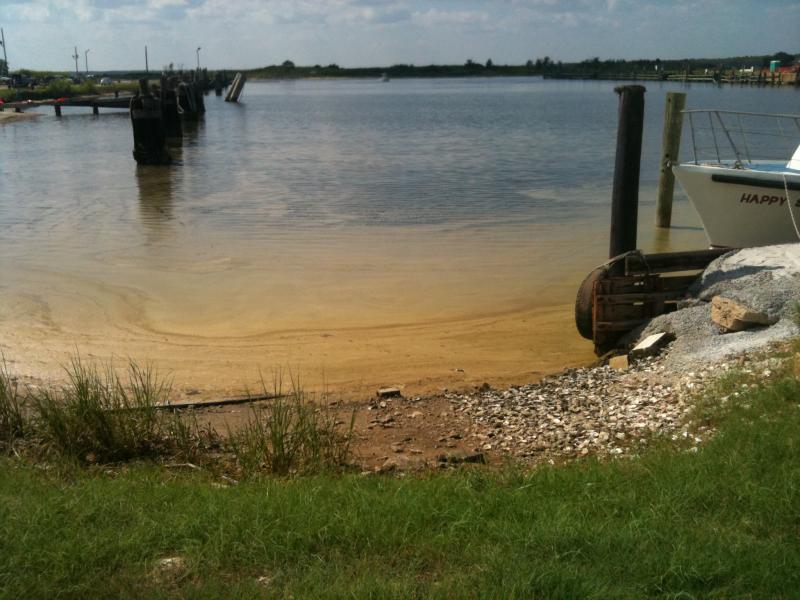 Minh V. Le, another local commercial fisherman and board member of the South Bay Communities Alliance, rushed to the dock to join him and take photos of his own.

“It’s quite interesting because I’ve never seen it before,” says Minh. “It looked like a broke down or weathered oil type. Its consistency was really thick, almost like foam.”

The fishermen found the substance stretched from Bayou La Batre Bayou to about a mile and a half east, near Codin, though in some areas it was spread more thinly. But today it was back.  At 8 am, a thick layer of brown, green, and white scum clung to the shore near the State Docks, and I photographed bubbles that are the telltale byproduct of toxic dispersants along the shore of Portersville Bay.  This time the scum was more bright-green-sludge than peanut butter, which Chris Laforce suspects is the oil and dispersants interacting with algae.

“I’ve never seen nothing like this,” He says, anger rising in his voice as he surveys the goop. “Born and raised on the water, all my life lived on the water.  It makes me sick to the think the government would open the fishing and shrimping– for people to eat this… It’s sad to think that BP had enough money… to buy the government.”

The local BP clean-up center is directly adjacent to the State Docks, but no one has been deployed to clean up the sludge. A man at the entrance explained the inactivity. "Yeah, we're aware of it. It's just algae."

He then recommended I call the Mobile Incident Command Center, which oversees BP clean-up operations across Mississippi, Alabama, and the Florida panhandle, because no one at the local site was authorized to provide information.
George Gigicos, BP spokespeople out of the Mobile, returned my call later in the day: "We're aware of it, we've tested it, and it's not oil."    He reported that representatives from BP, the Coast Guard, and the Alabama Department of Environmental Protection were on-site and tested the substance for oil on Sunday, Monday, and today. When asked if they tested for dispersants, he said, "I don't know.  All I know is that it is not oil."  Gigicos said he did not know about the specifics of the oil test, or of any plans to test the gunk for dispersants in the future.  He also suggested that people were confusing algae for oil.

This message was echoed by the Bayou La Batre Police Department, who Minh Le says were called by a concerned resident on Sunday.  Corporal Cory Finch relayed this verdict from the Department of Marine Resources, “It’s pollen and algae.”

But the fishermen aren’t buying it. Paul Nelson, a commercial fisherman in Bayou La Batre and President of the South Bay Communities Alliance, took samples on Sunday that he passed on to a local scientist.  He told me, “I’m attesting to the fact that this is derived from the oil spill and dispersants.”  He’s never seen anything else like it in his life, so what else could it be?

For these fishermen, the months since the BP oil disaster have had a lot of, “I’ve never seen anything like it in my life” moments, from sea life disappearing to bubbling plumes in the water that cause headaches and nausea.

“Something is in the water,” says Minh Le.  “Something has happened to our water.  And we really need to know, the people need to know.”