If not now when? – Oil Spill Response Bill may not survive incoming 112th Congress 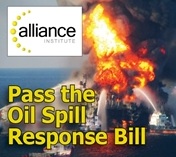 As the 111th Congress of the United States of America draws to a close there is a unique opportunity for assisting the ongoing struggle for full recovery of the Gulf Coast.  The region, battered by the 2005 hurricane season, which was led by Hurricane Katrina, the largest and most expensive disaster in the history of country and followed by several smaller hurricanes, was struck by disaster once again this year with the BP oil drilling disaster.  The BP disaster set back all recovery efforts by creating massive destruction of environment, livelihoods, culture and health.

There is currently a bill before the Senate that is critical to holding BP accountable for the disaster it created and moving recovery of the Gulf Coast forward. Senate bill S3663, the Clean Energy Jobs and Oil Company Accountability Act, also known as the Oil Spill Response Bill will:

1) Hold BP and other oil companies fully accountable for its oil disaster and do the same for future spills.
Following the explosion of the Deepwater Horizon, we saw conservative politicians run to protect BP by calling for Congress to cap the company’s liabilities.  This piece of legislation would put an end to future attempts to limit the liability of oil companies whose neglectful acts harm our environment and endanger our livelihoods.  Recognizing that the possibility of future oil disasters is very real, S3663 does not limit its call for full accountability to the current situation but sets its sights on future liability concerns.

2) Adopt reforms to increase offshore oil production safeguards.
The BP oil drilling disaster occurred in large part due to lax oversight, as well as numerous and considerable waivers given to the company in order for it to begin drilling.  This cannot be allowed to continue and S3663 sets in place the necessary reforms to protect the environment and coastal communities.

3) Invest in residential energy efficiency retrofits to save homeowners money and create jobs.
The United States is long overdue for a serious consideration of our addiction to oil and the dependence in creates on other countries for our petroleum based lifestyles.  S3663 recognizes that there are immediate changes that can be made to homes in the region that will not only decrease our individual dependence and create jobs, but will assist the region in setting the example for the future, as the entire country will have to make changes to alter our current state of dependence nationally.

4) Reduce oil use by investing in natural gas vehicles and electric cars
As the United States looks to diversify its sources for energy, it is important for the economic survival of the gulf south that we be at the forefront of new technologies such as natural gas and electric vehicles.  The arguments is not one of oil or no oil, but of how does the gulf south intelligently move forward towards a new energy economy while building on its historical foundation as an energy provider for the country.

The fight for gulf coast recovery has been difficult and with the incoming 112th Congress promises to be more difficult in the foreseeable future, unless we act now and urge our Senators to act in the best interest of the gulf coast and the United States.  Please visit the Alliance Institute's website to learn more and take action now.

Stephen Bradberry is Executive Director of the Alliance Institute and Advisor to the Gulf Coast Fund for Community Renewal and Ecological Health. He has been the recipient of numerous awards including the Robert F. Kennedy Human Rights Award.