Momentum builds at rally, as Gulf Coast residents stand up for the truth 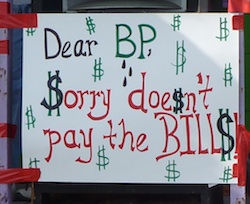 If last Saturday’s Rally for the Truth on Grand Isle, Louisiana is any indication, a lot of gulf coast residents are angry, sick, and tired.

But they are also getting energized and organized to fight for their homeland, after seven months of a woefully inadequate response to the BP oil and dispersant crisis from the “powers that be.”

“I am tired of state and local government telling us that we’re not seeing what we’re seeing,” Lorrie Williams, a crabber from Ocean Springs, Mississippi, told the crowd. She spoke of being told by officials that the black lungs recently found in Mississippi crabs are “normal.”  Williams characterized the attitude towards Gulf fishermen as, “You need to just shut your mouth, and go back to work.”

But as Dean Blanchard, a local seafood processor on Grand Isle, put it, “They may think we dumb Cajuns, but we not quiet Cajuns.”

So for more than four hours, speaker after speaker took the stage (the porch of Pirate Island Daiquiri, decked with colorful handmade signs) to passionately, beautifully, and vociferously “tell their truths” (in the words of Karen Hopkins, an organizer of the rally and Dean’s employee).

They told their truths about the growing crisis in the Gulf; about oiled seafood pulled from open fishing waters; about sickness brought on by spending time on the coast and on the water; about internal bleeding, respiratory illness, vomiting, rashes, and ears leaking fluid; about settlement checks for $600 to cover $200,000 in lost income; about not being able to provide for their families; about losing a way of life; and about the uncertainty and fear looming over the Gulf Coast and its future.

And they told their truths about all of the lies from BP, from federal and state officials, from elected representatives, and from the mainstream media, lies which seem designed to bury the crisis created by the oil and dispersant disaster, and protect corporations over the people and ecosystems of the Gulf Coast. 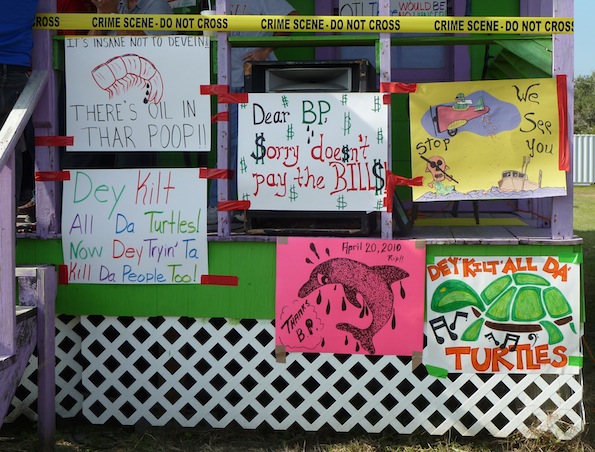 Even actor Stephen Baldwin, who joined the rally in hopes of bringing more attention to the crisis, said he struggled to get the mainstream media to tune in. “My publicists talked to 6 or 7 or 8 different news media outlets, and every producer said the same thing,” he told the crowd, which totaled between 200 and 300 over the course of the day. “'There’s no more story about the situation in the gulf… That story’s over.'”

Isadore “J.J”. Creppel mostly stood alone during the rally, in the telltale white rubber boots of a commercial fisherman, listening quietly.  He didn’t take the stage to tell his truth, even when it was opened up to whoever had something to share. But, like so many at the rally and along the Gulf, he’s faced a harrowing series of hardships over the past half-year.

When Creppel, a member of the United Houma Nation, first saw the oil off his hometown of Buras, LA, he says it felt, “like something ripped out of me… like my whole life was coming to an end.”  In June he suffered a heart attack that his doctor attributed to depression – depression brought on by seeing his life and home devastated by waves of crude oil and dispersant.  His medical bill from the heart attack was $90,000, money Creppel doesn’t have.  He sold one of his two shrimp boats in June, for just $3,000, about a quarter of what it would have cost before the BP disaster cast uncertainty on the future of fishing in the Gulf of Mexico.   (Watch a beautiful audio slideshow profile of J.J. Creppel here).

Creppel received a $5,000 check from BP initially, the standard amount paid to boat captains to compensate them for their lost income.  But in July the amount was cut to $1,000, without explanation. He had to re-file when Ken Feinberg took over the claims process in August. Since then he received one check for $1,000, then was told his claim is “under review.” (Related article about the Feinberg claims process coming soon to Bridge The Gulf.) 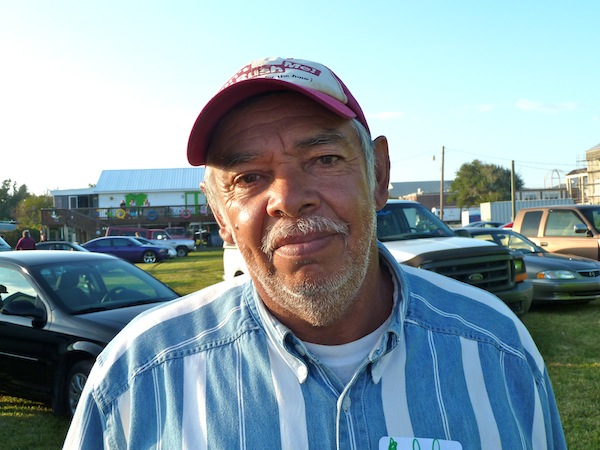 While he waits on that settlement, Creppel says he barely gets by with the help of Catholic Charities.  He also recently signed up for food stamps.

Despite the bleak outlook, J.J. says, “none of us are going to take this sitting down.”  He made the trip to Grand Isle for the first time in about five years, because he hopes the rally will help the world see how many people are hurting and in need of help.  He says he’s here to “join together, strengthen together” with others across the Gulf, and urges the outside world to “see us, hear us, do something about it.”

For many fishermen and Gulf Coast residents it’s been an exhausting summer and fall of unprecedented hardship and intensified advocacy– traveling to public meeting after public meeting, speaking to the press, and attending rallies, on top of trying to keep their lives, families, and communities together. Despite that, the energy at the Rally for the Truth was high, the voices were strong, and it felt like a new beginning for some in attendance.

I asked a few in attendance why they thought there was such a good turnout for a rally on this remote island, months after the disaster began. Clint Guidry of the Louisiana Shrimp Association attributes it to the fact that many in the fishing community are no longer directly dependent on BP for clean-up jobs (which had strict confidentiality agreements), because so many have been laid off in recent weeks. Guidry says that they’re free to speak out now so, “You’re going to see in the next few months, that some of these fishermen are going to start coming forward, stepping forward… I think you’re going to see more of this.”

But it seems that for some there is a deeper disillusionment and frustration with BP and the government’s response to the disaster, strengthening the resolve of Gulf Coast residents to rely on themselves and each other to clean-up the Gulf and restore their communities, health, and ecosystem.   Seeing President Obama, Gulf Coast Governors Bobby Jindal (LA), Haley Barbour (MS), and Bob Riley (AL), and federal agencies like the Environmental Protection Agency, the Food and Drug Administration, and the National Oceanic and Atmospheric Association acquiesce to BP’s interests, rather than protect public health and well being, has been a profound awakening for some. 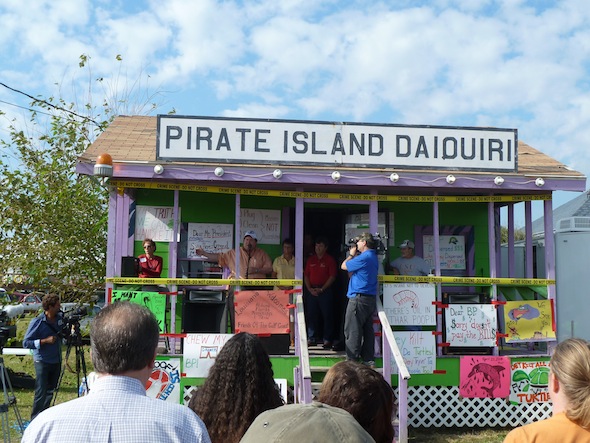 “When this started, I was a small town, all-American girl… True patriot,” Kindra Arnesen of Buras, Louisiana told the crowd.  “And then BP happened… Well I’m here to tell you that today, I’m a very changed person from 6 months ago… Because today I know that the government that I thought existed does not exist... We have a corporate government…  These people are bought and paid for… Without this type of movement,” she gestures to the assembled crowd, “ across the entire United States, we will not make a change.”

Cherri Foytlin, another organizer of the rally (and contributor to Bridge The Gulf), exhorted the ralliers with anger and tears rising in her voice,

Organizers of the rally have already begun planning more across the Gulf Coast in the coming months. 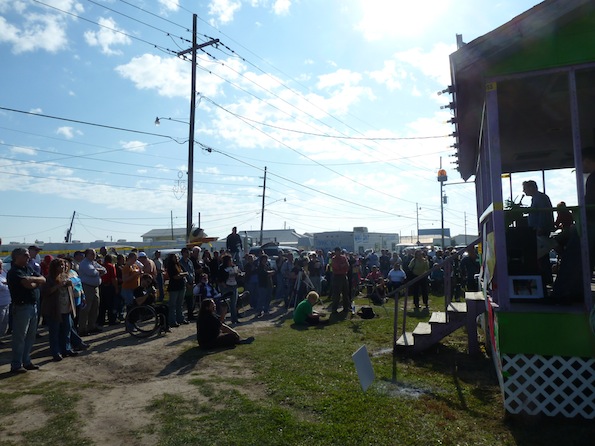