A Failing System Reminiscent of Tallulah 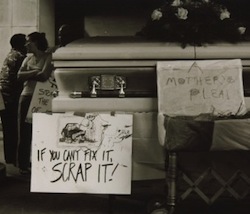 Efforts to reform Louisiana’s juvenile justice system are failing, according to a new report based on the testimonies of families whose children are incarcerated in that system.

The report, by Families and Friends of Louisiana’s Incarcerated Children or FFLIC, was recently released to the Office of Juvenile Justice (OJJ), the Juvenile Justice Implementation Commission, and Governor Bobby Jindal. The report highlights OJJ’s failure to implement the Juvenile Justice Reform Act of 2003 (ACT 1225) and offers recommendations which will bring about reform and move Louisiana more in-line with an internationally accepted model of juvenile rehab services.

The family reports compiled by FFLIC (which were given anonymously due to concerns of retaliation or other harm against incarcerated youth), pointed to three major areas of concern:

FFLIC came on the scene in 2001, when the organization held a “Mock Jazz Funeral” to mourn the dead and dying dreams of Louisiana’s youth (see photo, courtesy of FFLIC). The jazz funeral protest garnered national media attention and led to the closing of the Tallulah youth prison, deemed the worst juvenile facility in the country by the New York Times in 2000. At the Louisiana facility, youth were subjected to broken bones, black eyes, fractured jaws, and rapes as everyday occurrences.

The Juvenile Justice Reform Act was passed in 2003, and in 2005 the Louisiana’s Juvenile system (now know as the Office of Juvenile Justice) agreed to adopt the internationally acclaimed Missouri Model, ,which focuses on therapeutic, child-centered environment versus a traditional adult correctional or custodial model.

In our nearly 20-page report (download here), we found that several standards successfully implemented in the Missouri Model (developed by the Missouri Services Youth Institute) are not being effectively implemented in Louisiana, including rehabilitative therapy, placement of low-risk youth, facility staff and administration, youth transitions to productive citizenship, education, and physical facilities.

FFLIC is saddened by the findings in the report and is disappointed these constant shortcomings by the Office of Juvenile Justice force organizations such as FFLIC to exist.

In the 10 years we have existed, we’ve gotten a law passed, the Juvenile Justice Reform Act of 2003 (ACT 1225) — a law that is largely being ignored. ACT 1225, required Louisiana to close the notorious Tallulah Correctional Center for Youth and move our system from a correctional model to one that would provide rehabilitative treatment to our youth.

The Louisiana juvenile justice system does not seem to be rehabilitating many youth. Instead, these youth are being housed and released without any significant change to their behavior and perceptions. Sometimes due to the mistreatment and the violence they have suffered while locked up, the youth become hardened and jeopardize themselves and their community.

Children are still being abused and neglected within a system that vows to care for them. The fate of our children is in the hands of people who continue to treat our children with disregard and their families with disrespect.

Gina B. Womack is the executive director and co-founder of Families and Friends of Louisiana’s Incarcerated Children (FFLIC), a statewide membership-based organization dedicated to creating a better life for all of Louisiana’s youth, especially those who are involved, or at risk of becoming involved in the juvenile justice system. Gina is the proud mother of three children, a member of Pleasant Zion Missionary Baptist Church and Sanctuary Choir as well the Joyful Gospel Choir. She is honored to be a 2006 Petra Foundation Fellow, 2009 Juvenile Justice Project of Louisiana Advocate of the Year and 2009 Ms. Foundation Women of Vision award (see Youtube Video). Gina is also a 2011 Alston Bannerman National Fellow.