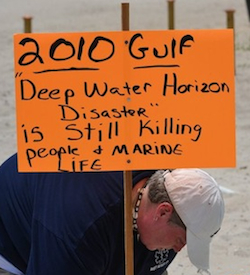 At the last minute I planned a friendly gathering in Gulfport, Mississippi for the July 4th weekend. Well, it ended up just being myself and my friend, fellow Mississippi Gulf Coast activist Laurel Lockamy. That was alright with us, because we accomplished what we set out to do: to inform, educate and possibly save a child or someone from getting sick from being in the waters of our Gulf.

Not only are we dealing with the after effects of the BP spill, we also have the effects of a sewage leak that happened last month in the Gulfport area, that was spewing out into the Mississippi Sound. Still, parents and their children continue swimming in those waters.

All photos by Laurel Lockamy.

We posted numerous signs by the road to bring attention to beach goers and motorists just passing by. Then Laurel and I walked the beaches, asking beachgoers about their weekend and what they thought about our beaches.

We got mixed reviews.

Laurel stopped and talked with a family whose children were swimming in the water. They were from north Mississippi, in Gulfport for the holiday weekend. Laurel explained that we were just trying to bring awareness to the public about how dirty our waters and beaches were. She explained to them how many dead sea turtles, dolphins and other marine life she and others have found on our coast, well over a year after the BP oil disaster began (in April 2010).

The family said they had noticed how black the sand looked and that they were wondering if it was from the oil. They told Laurel if we were out there doing this in the middle of the 100 degree heat, than we must be serious about it. They told their kids to get out of the water.

Just that situation alone made this whole day worth it to Laurel and myself. We got our message across to one family and possibly saved their children from getting ill. Now they will go home and tell someone else, and so on. That is how we have to warn unsuspecting tourists and locals right now, until we get the media and local officials to step up and tell the truth of what is going on.

I then came across a local, a young man probably in his late twenties riding his bike, with his little boy in a wagon behind him. He told me that the dead marine life is normal for our area. I disagreed and shared some information to prove myself, but he really was against me. So, I simply thanked him and went on.

But, I encountered him later, this time with a women about his same age on her bike. As they were reading my signs they said,  “Oh come on, why would you say that? You are going to scare away our tourists!” This sign read, “2010 Deep Water Horizon Disaster is still killing people and marine life.” 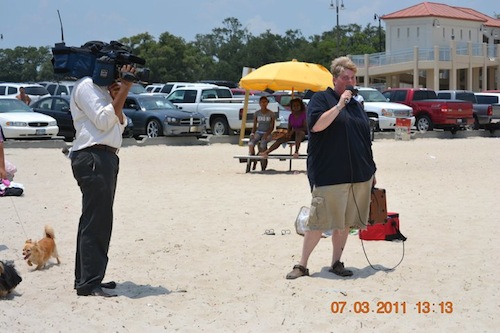 I then tried telling them about all of the sea turtles, dolphins and other marine life that have washed up on our beaches just this year. I told them about the oily sheens we still get, and that when the low tide goes out there are still tar balls and Corexit foam on our beaches. I told them people need to be aware of this so they can make their own decisions whether or not to go to the beach, and whether or not to let their children swim in the water.

I was deeply frustrated but kept my cool. I just reminded myself I will run into people like this that are going to disagree.

I then just wished them a happy and safe holiday weekend and went on my way.

During the time we were out there, a woman and her daughter stopped us and told us there was a dead dolphin floating over by the pier. They brought us over to show us, but the dolphin was gone. Luckily, the woman’s daughter had taken a photograph with her phone of the dolphin floating in the water. Another beachgoer later told Laurel that IMMS, the Institute of Marine Mammal Studies, came out just a bit ago and removed the dolphin.

IMMS usually never comes out that quick and to remove anything. But since it was a holiday weekend with such a large crowd, it was gone quicker then we could blink our eyes. Normally, when IMMS comes out, they count and spray paint the dead sea turtles or the dolphins, and then leave the carcass there to rot days and days on our beaches. Just this past April, a dolphin sat on our beach in Pass Christian, Mississippi for 5 days.  We suspect it was buried in the sand rather than removed, because the smell of death was still very clear days after it was gone.

While we were on the beach, a WLOX TV 13 van pulled in. I asked the reporter if was he looking for us. He said he was there to do a story about the snowball stand but they were not there. So here was our chance to get our message into the mainstream media. The reporter interviewed me as Laurel took photographs.  He then talked to other beachgoers, asking them what they thought of our beaches. 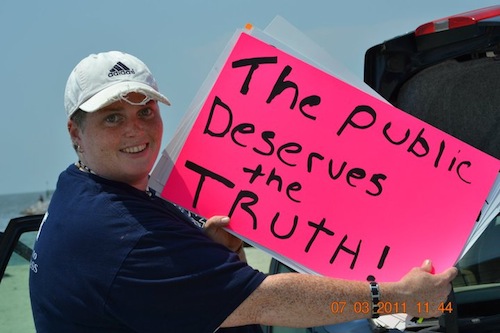 When the news aired at 5:30 pm that day (watch it here), the part about the dead dolphin was edited out. The news also did not include the segment of a interview with a lady who told us that the inside of her bathing suit always had some sort of oily residue in it. We need to find some other way to educate our public, since all the important information always seems to get edited out of mainstream media stories.

That’s why I seek not only to educate and inform, but also to BE THE MEDIA.  That’s why Laurel took photos, and why I am writing this.  We need to speak the truth about what is really going on in our communities, because we can’t rely on the media to do it.

This is only the beginning. I, as well as many other community members and advocates, will not stop trying to educate the public of our ongoing issues as this situation has clearly not improved. Our beaches may appear clean, however if you go out and observe you will see that it is not better.

Note from photographer Laurel Lockamy:
I am just a concerned resident who started going to the beach last year when my husband went to Afghanistan in June, right after the oil first started showing up here along our Gulf coast beaches. The more photos I started taking of the dead sea life, the more sad and angry I became. And then I posted photos with my name on them on our local news site and some great Facebook people found me, and contacted me. When I saw all of their photos I was amazed. In the beginning I thought no one else cared and so many people gave me such a hard time about my gloom and doom photos.  But now I know I am not alone and I take the photos to try and show people how bad our beaches are here in Mississippi, and to show why I think our water is not safe to swim in.

About the author:
Laurie Gayle Lambert was born in Gretna, Louisiana, and grew up in Bay St. Louis, Mississippi. Self-described as "just your average resident born and raised on the Gulf Coast," Laurie watched the Gulf Coast grow and fall apart and regrow since Hurricane Katrina. At almost 38 years old, Laurie left her job serving seafood in a casino, to raise awareness and speak truth about the ongoing BP disaster.  She says "I have watched our Gulf Coast begin to die, from dead marine life washing up on our shores to friends and neighbors getting ill from the BP disaster. Until the media and government steps in, I will not stop spreading the word. We are the Media!"  You may follow Laurie on her Facebook Page @Coastal Justice.