Conversations with the homeless: Why are more people on the streets? 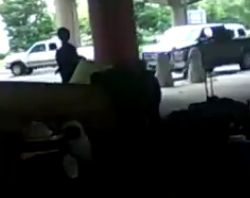 Right after Hurricane Katrina, newly homeless New Orleanians gathered on Claiborne Avenue under Interstate 10, and lived under tents and blankets. Some worked in hotels in the French Quarter and the Central Business District, but still didn’t make enough to pay for a place to live.  For a time, their numbers went down.  But now, six years after the storm, homeless folks are under the Claiborne Bridge, and under the Earhart Bridge, in large numbers again.

Is the homeless community expanding?  Why? Is homelessness a cycle? What's really going on with the people when we don't see them?  Where are they when they aren’t under the bridge?  What's the real story?

I asked these questions and more to some homeless and formerly homeless New Orleans residents.

Ronald Major is 34 years old, disabled and a homeowner in New Orleans.  Mr. Major said his home would be complete, but contractors deceived him and took his money, and he hasn’t been able to find them.

“I have to take my income monthly to purchase materials to rebuild my home and use volunteers.  I have been back on the streets now for a year. I was not able to continue to live in a home that is only partially repaired, and I have been forced to be a part of the homeless community, once again.

I have been Homeless off and on since Katrina and I have been blessed to do poetry and express myself through poetry.”

“I am 52 years old. I did construction work with my landlord, which covered my living expenses as well as additional income.  Well one day, my landlord/employer decided to sell his property and without notification, I was without a job and a home. I have been homeless lived with a friend and then back on the streets with never enough to become independent again. I am now in a program with Ozanam Inn.

"Being, unemployed makes it very difficult to obtain transportation and housing.”

Mr. Dorsey and Mr. Major’s lives show the cycle of homelessness. For example, Mr. Major was homeless after Katrina, moved back to his home after some repairs and then had to go back on the streets because of a lack of electricity and water at his home.  Homeless people are often only provided with a minimum to bring their lives back together again, and are not able to become whole.

Watch video: Living under I-10

"People are losing their jobs, and facing foreclosures, so housing is not at an affordable, sustainable cost. People are not able to get assistance from community agencies, government, or churches to keep from failing, falling.  They are not able to pay utilities, maintain transportation, or just have a clear mind to think it through.

"Agencies don't seem to have enough resources and staff to help people holistically.  In other words, there is not an adequate support system during these times.  As long as we have the economic situation that exists and disasters as they come, there will be a cycle of homelessess that is in existence.

"People are living in a lot of abandoned property and now the buildings are being torn down.  People are forced to the streets, cars, under the bridges and whatever shelters are available. This is where homeless persons and families are now."

Jesse Pullins - Advocate for the Homeless

Jesse Pullings, 53 years old, was formerly homeless and now is serving on the board for Unity of Greater New Orleans, whose mission is to assist the homeless to get housing. Given where Jesse is now and where Jesse has come from, he is truly a role model. He has answers to so many questions, as a part of the homeless community.

“I was homeless 16 years ago for 5 years and I am going to give you a true story. People are homeless because there is a lack of jobs.  People have been given housing without a proper support system, or the necessary follow-up for persons to understand they need to sustain a job to maintain housing. To be whole, their job, medical, transportation, education, and skills [need to be] in order. People who were doing well had problems, but no one to go to.”

"Homelessness is a series of events that happen in your life in a short period of time and you can't recover fast enough.  Where are the homeless when you don't see them? They are walking the streets and blending in with you on the streets, in the stores, in the parks, restaurants, just blending in with the people doing what they do and speaking the way they speak.  And at night [they are] living in abandon properties just staying hidden until the system does their “flush out”, their separation of homeless from our general population of society.”

Since Katrina, many people have lost hope and are just not able to think things through. Many need a support system that will give them directives for next steps and more.  Homelessness is on the rise because of this lack of a support system, and also because of foreclosures and a lack of jobs.

Where are the homeless when it we don’t see them?  It is evident from these interviews that they are right in front of us.  The homeless blend in with others daily on the streets, in our restaurants, in our churches, in all public places.  They look like us, they walk like us they speak like us.  But when night comes, if not in a shelter, they find themselves in abandoned properties.

What do we do in a time such as this to prevent homelessness?  Who do we call out to?  Do we continue to just feed them, when they need housing and a support system?  How do we sustain a population that is forgotten?