Get off your knees 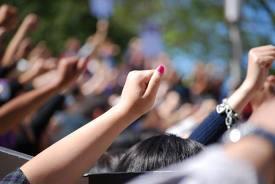 I have come to believe it is through a near deliberate attempt that our government has contemptuously sought to cover and grandstand on behalf of the privately-owned corporation BP.

Though nearly 17 months have passed since the Deepwater Horizon exploded and sank, we have yet to see an all-inclusive recovery plan based on the sole behalf of the people affected. It is no less than a malicious act of treason that any corporation, much less a group of them, should so devour the will of the leaders of a country as to direct that entity to be co-conspirators in the toxic poisoning of an entire region of their citizenry.

The lack of scientific data, displayed and heralded by the corporation and the government, is only surpassed by the bought and paid for “junk science” that has become a common occurrence in matters such as these. In a clear demonstration of rhetoric versus reality, the multi-billion dollar PR campaign launched and preserved by this corporation, in silent support of the administration, is clearly deceptive and revolutionary in nature.

If this were a one time occurrence then it would be no less the obligation of every global citizen to arise in action on behalf of justice. Yet, sadly, it is not. It is with grave and undeniable sorrow, that I am forced to remind you of Agent Orange, Gulf War Syndrome, 9/11 First Responder cancer fatalities, the Bhopal disaster, the people of Ecuador, the people of the Niger Delta, among others.

May I be among the first to apologize to the Earth, and to my God, for I did not stand or acknowledge places like Pitcher, Oklahoma; Mossville, Louisiana; Port Arthur, Texas; or any other of the long line of individuals and  communities who have suffered the affects of not only my continuous and life long consumption of the Earth’s resources, but also my prior apathetic and ignorant illusion that protection would come from any entity other than ourselves.

The time of the illusion has ended for me, and it is with no dramatic intention that I humbly ask that we as a people be moved to a time of action. Based upon the true scientific knowledge of recent proposals and events, concerning the Keystone XL Pipeline and the continuous assault by BP on our sensibilities and shores, I would like to introduce you to two very important coming events.

The first concerns a Gulf Coast community that has become, thanks to the great work of area humanitarians, synonymous with the environmental justice movement - Port Arthur, Texas. As resident and Goldman Prize winning activist, Hilton Kelley, explains, Port Arthur, “sits on America’s chemical coast - a stretch of shoreline dominated by one of the highest concentrations of hazardous waste facilities and refineries in the country. The city itself has eight major ones within it’s limits.”

Residents from the community have grown to accept the, “respiratory problems, sinus problems, skin problems and allergies”. And thanks to the work of Dr. Wilma Subra and Texas toxicologist, Dr. Marvin Legator, we know that, “Without question, the people of Beaumont and Port Arthur are suffering from many more health problems, especially neurological and respiratory disease…, ” due to the, at times, reckless industrial cohabitation of the area.

On September 26th, a public meeting will be held at the Bob Bowers Civic Center, 3401 Cultural Center Drive, in Port Arthur from 4:30 - 10:00 p.m. I am asking you to stand in solidarity with the people of Port Arthur by attending and voicing your concerns of the Keystone XL Pipeline, which if approved, will carry crude oil from Canada, North Dakota and Montana, to the refineries of that community.  Other activities, earlier in the day, are being planned with more info to come, please mark the date.

In addition, on October 15th in Gulf Shores, Alabama, at the annual Shrimp Festival a group of concerned citizens are organizing a non-violent direct action protest concerning the continuing incursion from the BP Deepwater Oil Catastrophe, and in consolidation of opposition to the Pipeline and other environmental justice based issues.

Simply put, many people - fishermen (recreational and commercial), families, workers, oystermen, shrimpers have been not only adversely affected economically and by loss of ecosystem, but have in some cases had their human right to health stolen from them. More so, it has been in reticence that the majority of these good people have been summoned to suffer.

With continuous oil and tar balls on the shores and in the marshes of the Gulf Coast, a seemingly never ending amount of  wildlife carcasses floating to land, and with thousands of people with symptoms of a yet to be named, or responded to, disorder - including, headaches, rashes, respiratory illnesses, heart and kidney afflictions, and digestive disorders - this event needs your support.

For more information, the Facebook event page can be found here.

Now is the time.

Now is the time for a true communion of all areas affected by corporate manipulation of truth.

Now is the time for a honest and sincere reconciliation with our past personal follies, with regards to the true purpose of our beings.

Now is the time for a national and global revolution against the invented notion that we are powerless to our own demise.

Now is the time to call for and demand true accounting of the scientific and political facts regarding our future and that of our children.

And it is time to combine the voices of those affected by mountain top removal, fracking, toxic waste dumps, chemical exposure, global climate change, oil spills, etc, into one unified voice for effective and morally observant change.

It is, after all, the clearest and most basic form of truth that clean air, water and soil are human rights, and ANY denial of such is a human rights violation against us all.

Please make plans to attend the two events listed above. In the words of Mr. Hilton Kelley, “Gotta get off your knees, and roll up your sleeves.”