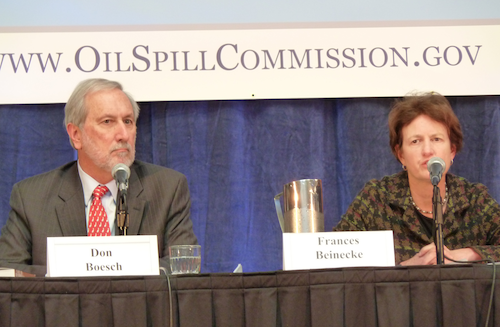 New Orleans -- In an emotional public meeting yesterday, citizens from across the Gulf Coast urged the President's oil spill commission to help solve the growing health crisis here -- and got a pledge of support in return.

Many citizens and non-profit groups praised and thanked the commission for its report on the BP disaster; But they also say it failed to adequately address health issues.  During the question and answer session, people from coastal communities across the gulf stood up with a common message: we need more than just a report, we need immediate help now to address an urgent and growing health crisis along the Gulf Coast.

"I really see no sense of urgency here...  Where is the sense of urgency?," asked Robin Young of Orange Beach, Alabama. "Is there anything being put in place?  Has anyone talked about getting somebody on the ground now with a team of doctors?"

Dr. Riki Ott, a marine toxicologist who has studied and lived through the Exxon Valdez spill, estimates that 4 to 5 million gulf coast residents have been exposed to dangerous levels of oil and dispersants.

Cherri Foytlin is just one of those.  The mother of six co-founded the grassroots group Gulf Change in response to the BP disaster.  She recently learned her blood has alarming levels of ethylbenzyne, a chemical found in crude oil.  Cherri made an impassioned plea directly to commissioner Frances Beinecke (who is also the President of the Natural Resources Defense Council), to be an ongoing advocate for the health of Gulf Coast communities, even though the commission has finished its job.

Cherri Foytlin:  Today I’m talking to you about my life. My ethylbenzyne levels are 2.5 times the 95th percentile, and there’s a very good chance now that I won’t get to see my grandbabies…

What I’m asking you to do now, if possible, is to amend [your report].  Because we have got to get some health care.

I have seen small children with lesions all over their bodies.  We are very, very ill.

And dead is dead.  So it really doesn’t matter if the media comes back… or the President hears us, or… if the oil workers and the fishermen and the crabbers get to feed their babies and maybe have a good Christmas next year… Dead is dead…

I know your job is probably already done, but I’d like to hire you if you don’t mind.  And God knows I can’t pay you.  But I need your heart.  And I need your voice.  And I need you to come to that table.  And I need you to insist that Feinberg and anybody else that needs to be in on that conversation comes too.  And I’m asking you that today.   And I would like you to say yes to me today.   While you look me in the eye, please say yes you’ll come to my table.

Frances Beinecke:  Yes.  And... I pledge that we will take [these health issues] back to the White House.

Oil spill commissioner Frances Beinecke, right, pledged to do more to address the health crisis on the Gulf Coast.  Photo by Ada McMahon.

The commission was created by President Obama to investigate the BP disaster and make recommendations to guard against future oil spills.  The final report was released Tuesday, and recommends an overhaul of the oil industry’s safety practices and a new independent body to provide oversight. (Read more from Bridge The Gulf contributor Rocky Kistner).