Kenneth Feinberg and the GCCF - How You Can Help 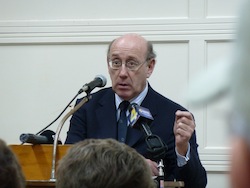 Last week I attended 5 meetings with Gulf Coast citizens and Kenneth Feinberg, concerning the claims process and the future of our people.


The following choices were given to us by the Gulf Coast Claims Facility (GCCF):


1. Final Payments - the option for this is still, according to Feinberg, a month away. By then, they should be able to understand the research enough to predict, again - according to GCCF, the amount of damages a person or business will incur in the future. This option will include a check for past, current and future claims provided by BP, but “in return you waive your right to sue BP or anyone else”.


2. Quarterly Payments - In this case you can document your damage every quarter, to receive payment. At any time you can return to option number 1.


3. Quick Payments - If you have already been paid emergency funds by the GCCF, you are eligible to receive a one time payment of $5,000 for individuals and $25,000 for businesses, BUT you are also signing away your rights to sue.


Here is my problem with these options:


1. Many people have not received emergency payments yet, or have been denied, meaning they are in dire straights after 9 months of living on no money. It is not an option to say you can eat now, and hope you don’t die of cancer in 10 years, or you can starve and hope to eat again in 20 years when this all gets through litigation. In many cases, Ken Feinberg is directly responsible for putting our people in this position.


2. We have no idea now what the impacts of the spill will be - either environmentally, industry wise or health wise. Doubt we will in 30 days either.


3. The research they are basing the effects of the spill in the future on comes from three colleges who have all received millions of dollars in BP money to conduct research. Independent testing from the Gulf will not be taken into consideration. We must demand that independent test results, even worst case scenarios, be taken into consideration concerning final claim options.


4. Ethically Kenneth Feinberg is not on our side. Any company that gets $850,000 a month will not bite the hand that feeds it - otherwise he would have explained the OPA 90 (Oil Pollution Act of 1990) law more (see petition below). Besides the fact the Ken himself will not tell us how much he is making - TRANSPARENCY, where are you?


5. There is no real formula as to payments received. Although Kenny had said that he would post them nearly 2 months ago, he hasn’t. Amazingly, some folks have received checks for $40,000 or more, while others working the same job, with the same documentation, have received nothing.


7. Waiving your right to sue - We have tens of thousands of people who are sick here, according to independent researchers. How many will die in the next decade is unable to be forecasted. Health related issues must be taken out of the equation.


We can sign the petition to have Ken Feinberg removed from being the administrator of the GCCF. The real intent of this document is to explain our feelings as coastal citizens, and to put pressure on Feinberg so that he and his bosses, may understand that we will not go quietly into the night. It is the number, not the names that are important, internet collected names will not be shown to either GCCF or Feinberg himself.


We can call or write Ken Feinberg, and his bosses, and demand that he take health concerns out of consideration for final claims, be transparent in the amount of pay he receives and the formula used to process claims AND include independent tests from coastal citizens and groups in the equation concerning future losses and effects from the catastrophe.


It is imperative that we all move to make a concerted effort to do this, there is a meeting being organized with Feinberg concerning the above dictates and we MUST show solidarity in these reforms to the process.


Our lives depend on it.