Living with the petrochemical industry 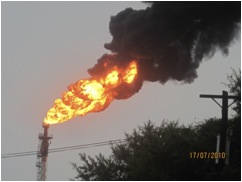 According to a new report, the petrochemical industry in Louisiana averaged one accident per day in 2010.  Here are three stories from that report, written by people who have seen the impacts of oil industry accidents firsthand -- two community leaders who live next to refineries, and one refinery worker.

Velma White, Shreveport
My daughter started getting sick at a very young age. Around the same time, there were explosions at the refinery and I said let me find out what they’re doing at that plant, what chemicals they are using and what was going on in my community. I started researching and talking to experts who helped me connect some of the chemicals to my daughter’s health problems. Now I believe this refinery is what caused the heartache that my daughter was going through.

I started talking to the plant manager about what we were dealing with. He tried to brush me off. But I knew that there was something wrong and I decided that I was going to find out and not let it go.

We deal with sickness all the time. My husband started getting sick. I hear people in my neighborhood talk about health problems – neighbors with asthma and oxygen signs on their door.

This refinery is not good for us in this community. It has taken our livelihood away from us. I’ve lived next to the refinery for 35 years. People ask me, why don’t you relocate? But it isn’t that easy. You invest all that you’ve got in your home.

I can honestly say that when Calumet bought the refinery in 2001, it got really terrible in this community. We’ve had quite a bit of explosions and flaring. It’s been one thing after another. You call the refinery to complain and they make it seem like you are just imagining the things that are happening.

I look around at my family and I can’t give up. I can’t get tired. I have to keep myself motivated to keep fighting and help this community. What I’d like is to just live and be able to do things outside – sit outside and barbecue. Kids would be able to play in the yard and not come back inside with trouble breathing. My dream is to live in a community where we don’t have to worry about the environment and I could concentrate on everyday life. Where we would not have to be afraid to let our kids go out and play. We wouldn’t have to fight so hard anymore to get a good quality of life.

Velma White is the president of Residents for Air Neutralization – a group of concerned citizens in Shreveport working to reduce pollution and improve quality of life.

Image: One of the 2010 accidents, a flare at Calumet Lubricants in Shreveport, Louisiana. Photo from Louisiana Bucket Brigade.

Seabell Thomas, North Baton Rouge
I’ve lived across from ExxonMobil’s refinery since 1966. I know that it’s not an advantage to anybody to be living next to refineries that are releasing emissions that are affecting your community. I first learned about the effects of chemicals on the body by working with Vietnam veterans exposed to dioxin while serving in the military.

I saw the same problems with chemical exposure in my neighborhood. My son was sick and in the hospital a lot when he was young and during that time there were a lot of explosions and flaring at the refinery and chemical plants. We tried to figure out what was causing his asthma attacks and the doctor said that it was coming from the environment. I have neighbors with chronic health problems, asthma attacks and trouble breathing. I also see the rapid rate of death in our community from cancer.

Everybody sees that we have a problem, but nobody can afford to get out and relocate. It’s hard enough to just survive day-to-day and deal with unemployment, illness and violence. It seems like we are always the last to find out about what’s affecting our community. We need access to information. In my experience, refineries may be willing to sit down and talk to you, but they are not willing to do the work to stop the emissions that come out of their plant.

I would like to see air monitoring systems in the community and schools to show the refineries what they are doing to the people in fenceline communities. I hope that next year is a better year. We just have to keep fighting.

Seabell Thomas is the president of Community Empowerment for Change. CEC’s mission is to improve the quality of life of communities in East Baton Rouge Parish by fighting environmental racism and improving environmental health, protection and policy.

Refinery Worker Perspective
When you look at petrochemical companies, you have to wonder what they are doing right. Profits are at record highs, but at what expense? This industry has seen several key cutbacks, such as lack of maintenance, staffing levels and inspections, just to mention a few. The workers and community are the real losers. Look at what happened at BP in Texas City [where 15 workers died and 140 were injured]. What needs to be judged is the safety and environmental culture of the company. These are not isolated incidents. There are many more accidents waiting to happen.

As a worker in the Louisiana petrochemical business, in the last three years, I’ve witnessed a reduction in the number of workers at production units. Adequate staffing levels are a key component in ensuring a safe facility. There has been a reduction in the number of company maintenance workers by replacing them with contractors. These cuts put not only the workers at risk, but also the community.

[USW has found that] the refining business is killing 25 workers a year. This is an average of two per month. This industry needs to be held accountable for their behavior. Many of these accidents are preventable and the companies admit that in their reporting to the state.