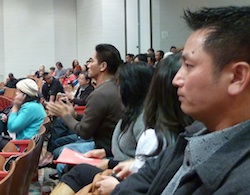 Criticism of BP "claims czar" Kenneth Feinberg continued this weekend at a town hall meeting in Louisiana, and this time members of Congress were listening.

Representatives Judy Chu (CA), Cedric Richmond (LA) and Al Green (TX), along with spokespeople from BP and the Gulf Coast Claims Facility (administered by Feinberg), listened as angry and desperate fishermen and advocates, many from the Vietnamese American community, spoke out against the claims process, severe illnesses caused by the BP disaster, and ongoing damage to fisheries in the Gulf of Mexico.

One common theme was that fishermen still can't make a living more than a year and a half year after the spill began, because the population numbers of some species, like white shrimp, are so low.

"Fishermen are still lost, confused.  They are suffering and struggling," said Kaitlin Truong of Asian Americans for Change, an advocacy group on the Mississippi Gulf Coast.

Another common complaint was that the GCCF, which was set up to compensate people for their economic losses after the BP disaster began, denies "interim claims" so that people accept the "quick pay" option out of desperation.  The interim option allows claimants to re-file every few months based on lost income, and doesn't make them relinquish their right to sue BP.  "Quick pay" gives previously denied claimants $5,000, but they must sign away their right to sue or file future claims.

Representative Green summarized the situation, "When your head is in the lion's mouth, any offer the lion makes is a good offer."  He asked people to stand if they currently had a claim pending with GCCF, and if it had been pending for six months to a year.  About three quarters of the crowd stood.

Joseph Brown of Jonesboro, Louisiana, told the panel, "I want to know what you're going to do about my medical bills.  I want to know what you are going to do about me being in this wheelchair."  He says he has had chronic kidney disease, an enlarged heart, trouble breathing, and worsening neurological problems since working to clean up the BP disaster on his shrimp boat.  Feinberg and the GCCF have not approved a single medical claim related to chemical exposure to BP's oil and dispersants.

Representative Judy Chu, who is chair of the Congressional Asian Pacific American Caucus, told the crowd she was "horrified to hear these stories."  She went on, "When we talked to Mr. Feinberg, he represented that things are going well with the claims process.  Clearly they are not."

[11/8/11 correction: the original version of the article stated that  said Mr. Brown became sick after shrimping in the Gulf.  In fact, his boat was hired in the clean-up effort, and he became sick after direct exposure to BP's oil and dispersants.]

***********************************************
Ada McMahon is a Media Fellow at Bridge The Gulf (www.BridgeTheGulfProject.org), a community journalism project for Gulf Coast communities working towards justice and sustainability.  She previously worked as a blogger and online organizer at Green For All, a national non-profit that fights pollution and poverty through "an inclusive green economy".  She is from Cambridge, Massachusetts, and currently lives in New Orleans, Louisiana.