One Year into the BP Oil Disaster,  Women Lead the Charge to Restore the Gulf Coast 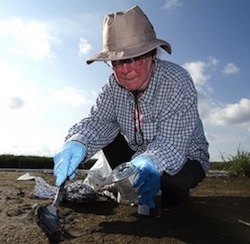 By Barbara Nonas, crossposted from Woman About Town. Today, April 20th, marks the one-year anniversary of the BP drilling disaster, when the Deepwater Horizon rig exploded and 172 million gallons of oil gushed into the Gulf of Mexico.

It’s a year later. There’s a frenzy of media attention right now because it’s an “anniversary.” But by Thursday the press will have packed up and moved on. And so will most of the country. After all, the crisis is over–it’s been over for months now, right?

The BP oil “spill”–scientists from Tulane University referred to it as “a river of oil flowing from the earth’s crust at a rate of 240,000 gallons per day”–is among the worst environmental disasters our country has ever faced. To make matters worse, BP used 1.84 million gallons of a dispersant called Corexit to break up the oil. The residents of the Gulf Coast were never told that Corexit contains known human carcinogens and is banned in Europe.

I’ve spoken with residents–an oil rig worker’s wife; fishermen and women; a young father who jumped at the chance to earn good money as a BP clean-up worker–and heard the shocking truth: the oil is not gone, and people living in coastal communities are getting sick. Really sick. They’re suffering from severe respiratory illness, vomiting, bleeding from the nose and ears, skin lesions, and other frightening symptoms. The common thread among all these folks is that before their exposure to the oil and dispersant in the Gulf, they were healthy. But after going out in fishing boats, living in their coastal town, or cleaning up BP oil, they all developed strange symptoms they’d never experienced before.

Many have been hospitalized, like Andre Gaines, a robust 27-year-old single-father of two small boys who had never been sick until he took a job as a BP clean-up worker. At first he was fine, but after a few months of working he ended up in the hospital, hooked up to an IV, unable to breathe. He’s out of the hospital now, but this once-healthy young man now suffers from severe headaches.

Read the rest of the article on Woman Around Town.