An open letter to BP and President Obama 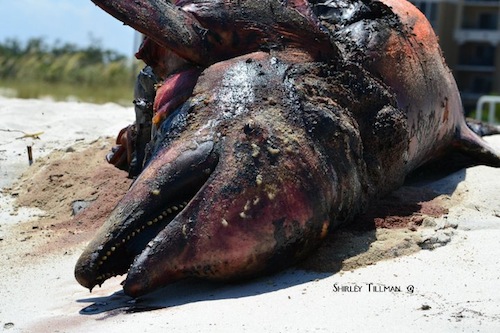 Dear BP and Mr. President,  My name is Laurie.  I’m a 38-year-old resident of the Mississippi Gulf Coast. I love this place. It has been my home my entire life, and home to most of my memories – both good and bad. I was born in Louisiana and lived in Gretna, LA until I was about 4 years old. My family built a home here in Bay St. Louis, Mississippi right around 1977.  Hurricane Katrina destroyed that house that I grew up in.  But we moved on. My family, friends and neighbors rebuilt.

I remember fishing with my grandfather and my cousins as a young kid. My grandfather taught me how to clean and eat the fish I caught. Back then, there were no concerns of being sick from eating those little fishies. It was a treat to catch, clean and watch either my grandmother or my mom cook dinner, from what I caught from our waters down here on the Mississippi Gulf Coast. I remember driving up and down our beaches as a teenager. I remember hanging out with boyfriends and girlfriends at the beaches here when I was a young adult.  For most of my life, “home” meant good memories like this.

Well, damn you BP, for not allowing the children of today to have those wonderful memories as I do. Lately we’ve been building mostly bad memories, thanks to you – Memories of waves of oil washing ashore, dead dolphins, fish, and sea turtles, and sick neighbors and friends.  Now, parents and grandparents alike have to worry about if it is safe to eat Gulf seafood. My question to you is, how do you sleep at night? 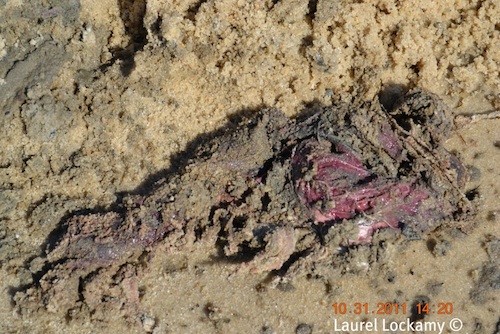 A decaying dolphin in Gulfport, Mississippi, 10/31/2011 photo by Laurel Lockamy.

And yes, Mr. President and BP, damn you for the thousands of sick folks down here that have no clue that their illnesses are caused by chemical exposure. And while I have your attention, both of you, y’all need to get with your buddy Kenneth R. Feinberg and the Gulf Coast Claims Facility and pay these deserving people their claims.  How are these parents, who can barely pay their utilities, their mortgages or to put food on the table, supposed to explain to their children for the second year in a row that there will be no Santa this Christmas? Explain that to me, BP and Mr. President.

How can you give my neighboring city of Pass Christian $100,000, but not put any of that to use in properly cleaning our beaches or helping the sick that have been exposed to these toxins?  How can you consider simply covering up oil and tar balls with new sand and dirt “cleaning up” the beaches?  The tide will keep uncovering the mess and exposing the oil and dispersants.

Damn you for that BP and Mr. President!

Also, are you aware of the fact that more than 400 dead dolphins have been found on Gulf Coast beaches since the BP spill began last April? (Source: CNN).  Scientists say that some of them died because the combination of oil and toxic dispersants weakened their immune systems and made them susceptible to the deadly disease brucellosis.

I bet you didn't know that the brucella bacteria that killed those dolphins can be passed to humans through skin abrasions from directly handling infected carcasses.  In humans, brucellosis can cause a range of symptoms that are similar to the flu: fever, sweats, headaches, back pains, and physical weakness.  But it also can include severe infections of the central nervous systems, and chronic symptoms like recurrent fevers, joint pain, and fatigue.  If the media and county officials do not warn folks to this potential danger, how are they to know?

And what’s the plan for disposing of these hundreds of dead dolphins that wash up on open beaches?  It is now confirmed that county and city workers are ordered to bury the washed-up dead dolphins and sea turtles in the sand.  A child digging in the sand near, for example, Cowan Rd. in Gulfport, Mississippi does not have to dig very deep to find a dolphin carcass.

A dead dolphin on a Mississippi beach, June 2011. Photo by Shirley Tillman.

Instead of safely cleaning up this mess, BP and our tourism industry are paying top dollar to promote “GULF SAFE” Seafood.   They promote fishing rodeos, like one in Gulfport, Ms., in which all the fish will be donated to Homes of Grace, a drug and alcohol addiction recovery organization.  BP, just how much have you paid the mainstream media to keep this disaster quiet?  Please tell me.  I have plenty of friends whose livelihoods have been destroyed thanks to you. So maybe they can get in on some of that cash you’re just throwing away to cover up your continuous lies.

Again, BP and Mr. President, how do you all sleep at night?

Unlike rebuilding after Hurricane Katrina, we as citizens cannot pick up a hammer and nails and rebuild our Gulf.  If we could, I know many of us would be doing just that. But you see, we cannot restore our Gulf until it is honestly cleaned up and not continuously covered up – from our waters, beaches and the barrier Islands; from Louisiana all the way over to Florida. BP and Mr. President, what are you going to do about this?

Thanks for your time and DAMN YOU BP!