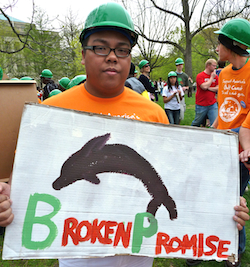 The wind blows soothingly as I’m sitting on the edge of the pier. Clouds blemish the open sky, which is flourished with various shades of reds and oranges. The sun is slowly setting in the distance, casting dark shadows against the numerous boats anchored to the desolate docks.

Some might consider this scene peaceful but for many shrimpers and fishermen, it could be nothing further from that. You see, just a little over a year ago the pier would be bustling with crewmembers preparing for a promising season. Many of these boats would be headed into the sunset to work for weeks to bring back their first big catch.  But in midst of their preparation, their labor was delayed by the havoc that spread from BP Oil Disaster.

For weeks, millions of gallons of oil spewed into the Gulf, destroying countless ecosystems and devastating the coastal communities.

A year has lapsed since this crisis began. The disaster provided a broad window of opportunity for changes, as America was awakened to the value of Gulf Coast ecosystems and communities, and also to the dangers of the oil industry. But the strides to restore the Gulf Coast have been minimal. There has been no political change in the spectrum of justice to hold BP accountable.  There has been no change to guarantee that communities are protected from the health hazards created by the disaster. There has been no economic change to create sustainable alternative careers for fishermen and oil workers.  But primarily, there has been no environmental change to ensure that the coast is restored to its former condition.

As a youth in one of the most affected communities, I contemplated what solutions I had to offer to this big problem. Surprisingly, I found the answer in the heart of Washington D.C., at a nationwide convergence of student environmentalists: Power Shift 2011.

This conference really offered me a lot. I heard many stories of what other students were doing in their communities and many of these stories resonated with me. I experienced what lobby visits were like, along with how to present ideas to my representatives. I even had the chance to participate in a flash mob that shut down a BP station to demonstrate our message. But the biggest lesson I learned is that the time to act is now. After waiting so long for our officials to implement legislation to defend the impacted communities, and seeing no change, we need to stand up now and say– no, shout– our concerns.

The movements for change start on the home front. We need to share our stories with others and motivate proper transformation. We need to create interpersonal relationships with our representatives to power the movement. But above all, we need to create and support campaigns that will revolutionize our democracy.

Power Shift 2011 gave me many resources to empower my own community. The most powerful resource I gleaned from the conference was the true power of the voice. Everyone has their own voice, but when everyone’s voice is in unison demanding the same shared goals, someone will listen.