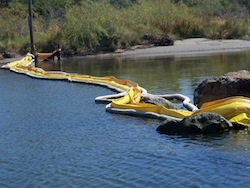 One year has passed since the announcement was made that the oil had stopped flowing into the Gulf of Mexico. I remember that day explicitly because it was the same day I went on national television and asked, demanded really, that the President come down and meet with the people being affected.

Why do I feel like I was so much younger then?

Looking at the video, which I haven’t in a long time, I remember that we - the people of the Gulf Coast, were in a state of immense mourning. I was so angry in that moment. I had watched the president come and shake his head at the toxic conditions of the place and people I loved more than any other in the world. I had heard the promises made.

I had held the hands of fishermen and wildlife workers, while warm salty tears flowed from them just as freely as oil from that hole.

I had met mothers, just like me, who wondered as well - were we going to be able to feed our kids, let alone get them to college. Oil working families and fishing families - who often are the same, by the way – tourism families, restaurant owners - we were all in a state of shock and despair. What of the small businesses who exist solely on the back of the wealth of their neighbors?

And I saw a flagrant lack of respect from BP, who was in full swing, spraying Corexit on our waters, sinking that oil - out of sight, out of mind, for them at least.

I had heard of the clean up workers – our first responders – being taken to the hospitals, unable to breath, throwing up. Going back the next day, when possible, to use what looked like cat litter shovels and paper towels to clean up the beaches and marshes.

Vessels of Opportunity captains (fishermen whose boats were employed in the clean-up operation) wringing their hands with fear, as they wandered through the estuaries, oil clinging to their boats. Using radios to call in oil in open seas, being sent away, only to see the planes come. Perhaps the opportunity was to witness your homeland be damaged – to what extent we still don‘t know, or worse to be sprayed with a chemical they admitted they didn’t, and don’t, know too much about.

Oh, I remember this day... And the days before, and the days after. I will never forget.  That is when my life changed forever. In some ways, it was during that time when a part of me died, but it was also a time when a new part was born.

Well, a year has passed. And there is still oil in our water, and we are still struggling financially, and our wildlife still washes up daily, and BP at every corner has ducked and dodged responsibility for this catastrophe - all while paying billions to tell the rest of the world they are “making it right”.

Although our people are starting to get to work out there in the industry again, it is bitter sweet to know that they are no safer, and neither are our shores.

Absolutely no legislation has been passed on the federal level to protect us.

We must now fight for citizen’s oversight of the oil industry, a Regional Citizen's Advisory Council (RCAC), like Alaskan communities received a matter of months after the Exxon-Valdez tragedy.

Must we beg for fine monies from BP to come back to us, so that we can rebuild our fragile coast and ecosystems? Apparently, yes - because as it stands right now, we may not see a dime of that money here.

Our fishing families, in some cases are nearly destitute due to the cost of gas and the low price of seafood, a product we honestly question whether is safe.

Many people are ill with a long list of ailments that we have little to no medical research to understand; let alone health providers to treat.

And the commissions and meetings are largely over, and their recommendations have been ignored. The spotlight has been turned off, and people have moved past the photos of oiled pelicans and onto other tragedies, other issues, other distractions.

But if there is one lesson we should have all learned over the last year, nothing stays the same. Just because we feel we have lost in this moment, does not mean that we will not win in the next.

Honestly, I hate seeing that video from a year ago. It takes me back to that time, and that place of speaking from raw emotion.

Today, I am speaking to you from a different place - one of raw determination. We cannot lay down, for this will happen again, if not here then somewhere else. Frankly, it is happening daily all over the country and globe.

From the east to the west, vulnerable populations are paying the price for energy consumption. The ground beneath us is littered with those who have fallen due to industrial pollution in the form of toxic land fills, refineries, chemical plants, fracking, mountain-top removal and coal mining practices, lead poisoning, tar sand extractions, nuclear plants - man-made disasters of all kinds.

We in the Gulf historically have been a sacrifice to the nation for decades. And it is, and always has been, on the backs of the poor, that these sacrifice have been made. One child is worth no less or more than any other. It is we, the people, who lose, when a life is taken from us too early. When a life is unable to reach its full potential, for want of clean air, or clean water, or clean soil to grow healthy food. It is a human rights issue, you see?

My thoughts run rampant as to what life we are leaving for our babies and grand babies to grow up in, my heart is heavy with the thought of “turning in the keys” to the Creator, with a bowed head of shame and apologies on my lips.

I cannot. I will not.

Many people are now working on a variety of outreach and action during the week of August 4. Please be ready. Three hundred and sixty-five days have come and gone, it is time to claim our power, to find our voice.