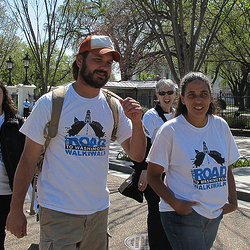 This week, I've come to Washington, D.C. from the Gulf Coast. Thirty-four days and 1,243 miles ago, I set off on foot from New Orleans, Louisiana. I've faced tornadoes, rainstorms, heat exhaustion and countless blisters. But here I am, and I walked the whole way.

Why walk? Because it was clear that the reality of the BP disaster was not reaching our leaders in Washington, the mainstream media, or the rest of the country. So I decided to break this truth barrier in the simplest way I know how -- by walking right through it and talking to average American citizens along the way.

BP has poured tens of millions of dollars into advertising to convince America that its oil disaster is cleaned up. President Obama and Congress have all but ignored the disaster since last summer. And the mainstream media have been sending the message, through its silence, that things are back to normal.

But things are far from normal on the Gulf Coast.

Today, most BP clean-up crews have been dismantled, yet new and weathered oil continues to show up on our beaches and in our marshes. Wildlife continues to wash up dead on our shores, by the hundreds.

The long-term impacts of the toxic cocktail of oil and dispersant (nearly 2 millions gallons of which were sprayed in the Gulf, the largest release ever) may not be known for years. Despite the unknowns about the future, we do know that coastal residents are facing an urgent, growing health crisis on the Gulf Coast.

Today thousands of people living on the Gulf Coast are experiencing headaches, respiratory afflictions, heart palpitations, liver and kidney damage and skin lesions - with limited or no access to appropriate health care. Theses symptoms go beyond those of the clean-up workers; anyone who breathes the air or eats the seafood may be affected.

The economic devastation also continues. The claims czar appointed by President Obama, Kenneth Feinberg, has so far proved inadequate in providing fair settlements. The Gulf Coast is devastated by the lack of fishing opportunities and decreased tourism, and still reeling from the moratorium on oil drilling. Feinberg was appointed to relieve this economic pain, but instead was found by a Federal Judge to be beholden to BP. Coastal residents, backed into a corner by economic necessity, often accept unfair settlements, signing away their right to sue BP in the process. The option of eating today or dealing with twenty years of litigation is not a real option at all.

The long-term sustainability of the region's economy, environment, and health is very much in question. But Congress, the President, and the media have mostly turning a blind eye to the ongoing disaster.

Congress has yet to act to allocate funding to restore the Gulf Coast. Under the Clean Water Act, BP and other responsible parties will be required to pay fines for the damage they have caused to the environment. These fines, based on the number of barrels released, could reach up to $20 billion. But U.S. law does not specify that the penalty dollars have to be used in the Gulf. And the company's lawyers may try to reduce that amount to as little as $3 million.   Congress must pass legislation that directs BP's fines and penalties specifically to Gulf Coast ecosystem restoration and community recovery, and the federal government must fight to ensure BP does not limit its liability. Without Congressional action, the Gulf and its people may never fully be restored.

A year ago, in the days before the disaster began, we thought that the laws regulating the oil industry and protecting public health were stringent and adequately enforced to prevent catastrophe. We were wrong. What has happened to the people and environment in the Gulf of Mexico is a human and civil rights violation. And it continues to be an environmental and humanitarian crisis.

The lack of governmental protection on behalf of the people is disheartening and destructive to the very fiber of our country's foundation. But if anything good has come out of the disaster, it is the growing activation of Gulf Coast residents. People like me who trusted in our government and democracy, but now see the true sway that corporations and the oil industry have. Rest assured, there is a movement growing on the Gulf Coast for clean air, clean water, health, justice, and democracy. But we can't do it alone.

Cherri Foytlin is the mother of six and the wife of an oil worker in Rayne, Louisiana. She co-founded Gulf Change, blogs for www.BridgeTheGulfProject.org, and walked to D.C. from New Orleans (1,243 miles) to call for action to stop the BP oil disaster.