We Must Continue to Hold Oil Polluters Accountable 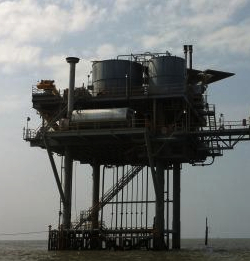 By Renee Blanchard, Save Our Gulf. One-year ago today the Obama Administration lifted a moratorium on new deepwater oil-drilling. The moratorium, put in place on April 30, 2010, was the federal government's attempt to prevent new catastrophic oil disasters in the Gulf of Mexico. It was issued only a month after President Obama expanded offshore oil drilling areas stating oil spills don’t usually happen from drilling. We all know what happened in between those two days. The BP oil disaster.

The BP oil disaster wasn’t the first oil spill in the Gulf of Mexico and it won’t be the last. In a report released by Gulf Coast Waterkeepers last week, it is estimated that over 3,000 oil spills have happened in the past twelve months. That isn’t even counting onshore oil spills along the Gulf Coast. The oil industry clearly has an oil spill problem.

The Waterkeeper Alliance will never be shy about holding polluters accountable. Today Waterkeeper Alliance and several Gulf Coast Waterkeeper organizations served a notice of intent to sue to polluters for a chronic oil spill violating the Clean Water Act since at least 2006. Our co-founding Gulf Monitoring Consortium partners, SkyTruth, have compiled a timeline of the National Response Center reports to the Coast Guard of the oil spill throughout the years.

The problems that led to the BP oil disaster have not been fixed, but the responsible decision by the federal agency Bureau of Ocean Energy Management Regulation and Enforcement to slow down new permits as the industry, the government, and our communities try to find solutions to the industry’s oil spill problem is commendable. Unfortunately, our politicians don't always learn lessons from the recent history. Just yesterday Senator Vitter and Representative Landry held a meeting with Bromwich encouraging the agency to speed up the process to the levels of pre-BP oil disaster. Stating that slowing the permitting process is costing Louisiana much needed jobs. I have family in the oil industry and I can appreciate the sentiment to keep my family's income, but I have serious problems excluding the full cost of the oil industry to our economy and our environment.  I also have serious problems with elected officials being the voice of the oil industry when they are supposed to be representing my voice.

Over a year after the BP oil disaster, our communities and ecosystem are still trying to recover from this disaster. Fishing communities are devasted. The white shrimp season is being considered a failure and fears of a lost generation of shrimp have many scared for their future. Oyster leases have been decimated. And communities all along the coast are still facing growing public health concerns. The economic costs of the oil industry to our communities can not only be measured in  jobs. We must take into count the number of livelihoods lost due to oil spills and coastal erosion because of industry canals through out wetlands. When talking costs, let's compare with reality in mind. We must take this into consideration before allowing new drilling permits.

The fact that an oil spill could continue without penalty for nearly six years highlights a serious problem with the lack of consistent enforcement of our current environmental laws. Our enforcement agencies are not adequately funded and we are too dependent on the industry regulating itself. We cannot trust the fox to watch the henhouse.

On September 16th, 2011 the Deepwater Horizon Joint Investigation Team released its final report on the explosion, loss of life, and oil spill disaster that occurred in April, 2010. Volume II of the report includes evidence that a number of federal offshore safety regulations under BOEMRE were violated by BP, Transocean, and Halliburton. Seven federal regulations were violated in the lead up to the BP oil disaster. The report found that stronger regulations and consistent enforcement are needed to prevent future oil disasters.

As long as oil spills are just business as usual for the oil industry, the Waterkeeper Alliance and Gulf Coast Waterkeepers are committed to holding the industry accountable for its environmental and economic damage.

Renee Blanchard is the Coordinator of Save Our Gulf.