“Unity and Solidarity,” a May Day Speech by Ted Quant 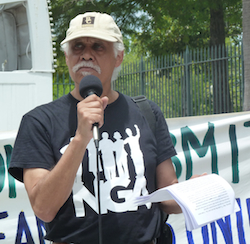 At a May 1 New Orleans rally and march for immigrant rights, Ted Quant, a social activist and director of the Twomey Center for Peace through Justice at Loyola University, delivered the following speech on the history of May Day, the need for workers and communities to unite across race, and how the attack on immigrant workers is part of a divide-and-conquer strategy by “the 1%.” :

"May 1st is called May Day and Labor Day.  It came into being in the age when working people organized internationally and in country after country for the eight-hour work day. At a time when international capital was unfettered in its brutal exploitation of labor, workers around the world rose up in international solidarity to win the eight-hour day, to build unions, to demand child labor protection laws, minimum wages, safety regulations, and all the things we have taken for granted in this country. Today all the benefits won by past generations of fighters for labor rights, civil rights, and human rights are under attack.

This Labor Day, we must in the tradition of May 1, reaffirm our international solidarity with all the dispossessed, hungry and poor, in the fight for our survival. Today we need to reaffirm our unity and solidarity -- black, brown, white, red and yellow, citizen and immigrant, documented and undocumented -- in our common interest in defending human rights and the right to organize.  We must counter the rhetoric of hate with our demonstrations of unity and solidarity.

The peoples of the world have nothing to gain by fighting one another in the interest of capital. People the world over are ultimately fighting for a new world where the wealth our labor creates, by transforming God-given natural resources into useful and needed commodities, is wealth used to meet the human needs of the human race.

The resources already exist to end hunger and homelessness, to provide universal health care and to wipe out illiteracy.  For the 1% of the population that controls this wealth, it is not enough. Their bought-and-paid-for political representatives and their bought-and-paid-for Supreme Court, pass laws and define what is legal in their interest, that is, in the interest of the 1%. They want to cut taxes for millionaires and billionaires and increase taxes on the poor and working class. At the same time, they want to cut the budgets for health care and education, and end regulations that protect the environment and food safety. To make sure we can’t fight back they want to destroy labor unions and the right to organize for millions of workers. Not satisfied with even this, in state after state, laws are being passed to restrict the voting of African Americans, students, and poor people.

The attack on immigrant workers is part and parcel of this strategy of divide-and-conquer. By blaming immigrant workers for every evil, from crime to unemployment, citizens and immigrant workers end up divided instead of united in our common interest. But thanks to the courage and organizing work of leaders like Daniel Castellanos, a leader of the National Guestworker Alliance, this tactic is being exposed as an attack on the living standards of all workers.

On this May Day, all of that is being dramatically challenged as guestworkers, community leaders and union members joined together to demonstrate at the stockholders meeting of the Hershey Chocolate company. Saket Soni reported that, 'They exposed the depth of Hershey’s corporate greed: how the company destroyed hundreds of permanent, living-wage jobs and subcontracted to replace them with temporary, sub-minimum wage jobs for exploitable guestworkers.'

The National Guestworker Alliance (NGA) was formed to expose and fight for a reform of this system that traps immigrant workers in a form of debt slavery and abuse while pitting them against US citizens in a competition of who will work for less. We all lose in this divisive race to the bottom.

Members of the NGA took the fight to Washington, DC where hearings were held.  They got the Department of Labor to rewrite the rules based on their testimony. This was a great victory and demonstration of courage by these very vulnerable workers.

But the fight is not over. On April 26, 2012, a federal judge in Florida issued a preliminary injunction blocking new Department of Labor rules for the H-2B guestworker program from taking effect for 60 days. The order came as a result of a lawsuit by the U.S. Chamber of Commerce and several employers’ groups meant to block the new rules.

Our enemies don’t rest.  Neither should we.

Let me close with some old slogans, still timely on this Labor Day: