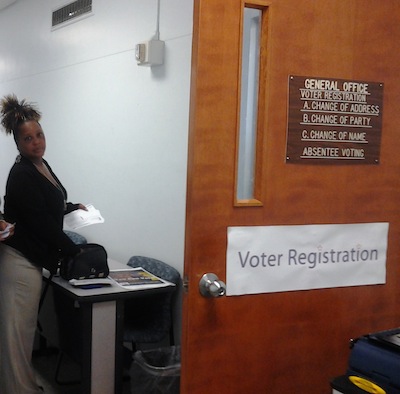 On the news tonight they’ll be talking about undecided voters and swing states, and who the voters choose: Obama or Romney. What they probably won’t be talking about is those who didn’t vote, not because they’re lazy or ignorant or anti-American, but because it’s against the law.

Nearly half a million people in the five Gulf states didn’t vote today, because as formerly incarcerated people, people on probation and parole, or currently incarcerated people, they’ve been denied that right. That number doesn’t count the Formerly Incarcerated People who don’t even know if they have the right to vote, because the laws blocking voting rights vary from state to state.

Today, for the first time in years, Zina Mitchell was not one of those half a million blocked voters. A community advocate and outreach worker for Women With A Vision, Zina also happens to be a Formerly Incarcerated Person (FIP). During previous elections, she was ineligible to vote or unaware that in Louisiana she has the right to vote as a FIP. Zina has fought and advocated for women like herself, low-income women who have struggled against drug addiction at the intersections of race and gender discrimination, but she wasn’t able to make change at the polls. Zina could not use her righ tto vote to transform the government system that incarcerated her instead of treating her drug problem.

“They need more people like us able to vote because the outside world doesn’t know what is happening in these places, that you aren’t being rehabilitated,” Zina told me today, after casting her vote. “All they are doing in these jails is furthering your criminal experience and making the drug problem worse. They need people like me who will tell them what is needed for FIPs to better themselves and be able to re-enter society.”

For so many different issues that our communities and elected officials are struggling with, we need more Zina Mitchells at the polls, not fewer. That’s why Voice Of The Ex-offender (VOTE) helped register Zina and hundreds of other FIPs and pretrial detainees in the local jail. FIPs have a lot at stake; so much of their lives is controlled and decided by political leadership and policies. Yet like other groups whose lives are heavily legislated, they have the least amount of say.

To give another example, at a time when immigration policy is one of the top issues in the public and political sphere, immigrants, both documented and undocumented, are denied the right to representation, despite their number of years living in the country, their contribution to the tax base, and their labor. As with the criminal justice system and mass incarceration, decisions about immigration policies are made without the representation of the people mostly directly impacted.*

And it’s no accident – the recent wave of voter suppression laws came after the 2010 census showed large growth in populations of color in the United States, and after the 2008 election, when huge voter turnout, including unprecedented numbers of new African American and Latino voters, elected Barack Obama. Bridge The Gulf contributor Brentin Mock has been reporting on the right-wing voter-suppression strategy for Colorlines, including how the Tea Party-backed organization “True The Vote” is training “poll watchers” to essentially intimidate voters of color - a tactic reminiscent of the strategies used by the Ku Klux Klan and other groups that effectively denied Southern Blacks access to the polls for generations.

The Civil Rights Movement focused on the right to vote as a path to racial justice and equality, and succeeded in winning the Voting Rights Act of 1965. But the efforts to suppress Black votes continued, and have dovetailed with the rise of mass incarceration. As Michelle Alexander demonstrates in The New Jim Crow, locking up massive numbers of Black men for minor drug crimes and then denying them their right to vote and their ability to find work and re-enter society, is a contemporary manifestation of the United States’ racial caste system.

Despite, or perhaps because of, this history of degraded democracy, VOTE focuses on voting rights and access for Formerly Incarcerated Persons. In order for FIPs to use their experiences and vested interest to transform the criminal justice system, they not only need access to the ballot box, they need to be given access to the legislative and judicial branches. VOTE educates communities about how to change laws that impact FIPs. And while the leadership of FIPs and people of color is crucial, it cannot thrive in isolation. We need our allies to take their place at the table, organizing each other, acknowledging and marshaling their privilege and access to resources.

To undo America’s racial caste system and build a democratic society, it’s going to take a multiracial movement of the disenfranchised, with a place for white allies who realize their own stake in letting go of white supremacy masquerading as “American Democracy”.  Again, the conversation in mainstream media is not keeping up with the grassroots - the pundits talk of “women voters”, by which they mean white women, with the assumption that white women are a narrow and siloed demographic who don’t vote in unity with women of color. And yet, throughout our organizing work we are finding signs to the contrary - white people who are realizing their own stake in uprooting racism. One such person is Sara Kugler, who works at the Anna Julia Cooper Project on Race, Gender and Politics in the South. Sara has volunteered for VOTE over the last 3 years, and her dedication is rooted in her belief that our freedom is inextricably linked. Sara isn’t just making the choice between Romney and Obama this election, she’s spent the last three years working so that Zina and thousands like her will have access to the polls today. Despite their different backgrounds, experiences, and roles, Zina and Sara are united as the beginnings of a voting block, and a movement.

Sara was one of the organizers of Ballots & Beyond, an exciting development in our electoral organizing this year. In partnership with Catalyst Project, VOTE hosted three pot luck discussions to fuel a broader conversation about electoral politics and racial justice among white people. The pot lucks targeted white people because we believe they can and must do more to stand up collectively for racial justice.

Over 40 people – from teachers to artists to retirees – came together at these events to learn about the barriers to voting that people of color face, the history of electoral politics in the U.S. and its roots in white supremacy, and to learn about VOTE's work.  At the events white allies took concrete action in solidarity with VOTE, by signing up to volunteer and by donating. They also envisioned how different the next election could be if white people realized their stake in a truly democratic multiracial society, and ramped up efforts to fight collectively for that society.

In these events was a seed - what could electoral organizing be like if we transformed “American Democracy” from individuals checking either/or on a ballot, to organizing collectively for self-determined community decision-making and people-powered politics. Whatever the results of today’s election – we’ve got organizing to do. And it’s going to take all of us truly seeing our stake in racial justice, and coming together in multiracial alliances to transform our world.

*Just want to put a note here that people from other communities are also being similarly impacted, like LGBTQ folks, the elderly, people with disabilities. And remembering/reminding us all that people belong to multiple groups.