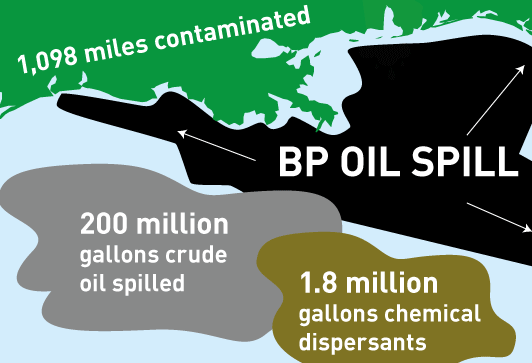 Two years ago today the Deepwater Horizon rig exploded, due to poor decisions made by BP and Halliburton engineers, killing 11 rig workers and spilling upwards of 200 million gallons of crude oil into the Gulf of Mexico. As tragic as that moment was, the tragedy continues to spread, much as the 1.8 million gallons of chemical dispersants spread far beyond the waters where they were targeted. Workers who were overexposed to oil during the cleanup have been crying out for two years that their health conditions have been worsening since getting involved. Gulf coast residents, tourists and workers who sniffed, inhaled or skin-absorbed the chemicals found in crude oil and dispersants have also been crying for help. Yet, these cries have largely been ignored.

Kenneth Feinberg, administrator for the Gulf Coast Claims Facility, said to Bridge the Gulf that he had “reservations about whether those claimants," who have been saying they have health problems related to the BP oil disaster, "can offer proof.” Of the over 220,000 claims paid to individuals and businesses for economic losses tied to the disaster, zero were for health claims.

Two years later, a Department of Justice investigation found that Feinberg ran his GCCF operations straight sloppy, with $64 million paid out to those who were underpaid or not paid at all. Bridge the Gulf, which launched two years ago, in the wake of the BP oil disaster, has been recording the complaints of hundreds of Gulf Coast citizens who didn't get their due from GCCF.

You can also read and hear from some of these folks in a series of interviews we did to coincide with a new report released in collaboration with the Institute for Southern Studies and Gulf Coast Fund called "Troubled Waters." In that report, we find that Gulf Coast residents are still reeling from these problems, and despite a settlement that will include millions for health problems, there still seems to be a burden of proof problem that might exclude thousands of people from benefits and reimbursments that they need.

The fact that the BP settlement acknowledged health benefits in ways that Feinberg didn't is a clear victory for Gulf Coast grassroots organizations who lobbied and fought for this. But there will be plenty of monitoring and oversight needed to make sure that those who had been excluded before will be included under the new terms. It is also a clear victory that Gulf Coast Fund advisor Derrick Evans and Texas environmental justice advocate Bryan Parras were able to get a BP shareholder to agree to come to the Gulf Coast to see what the problems are that remain.

This, and other problems still occurring in the Gulf, finally grabbed the attention of some in the media, who've found evidence behind the grievances that Feinberg was so skeptical about. Please do read the "Troubled Waters" report and the interviews, but also check out these news stories that captured the essence of the problem two years into the BP oil disaster:

New Orleans-based journalist Brentin Mock is the latest addition to the Bridge the Gulf community, where he works as web editor. He joins us after working with a number of Gulf Coast-based organizations including The Lens and Ocean Conservancy, and has reported extensively on the Gulf Coast for numerous outlets including Colorlines, The Daily Beast, Newsweek, The American Prospect, Essence, and The Root.