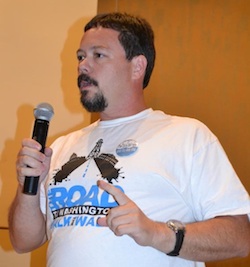 So, I've learned a lot since BP came here and ruined things on the Gulf Coast. I've had a front row seat to the whole crazy mess here in Mississippi. I've opened my eyes to the realization that all these companies could give a rat's snout about us. We are expendable. We are the cost of doing business. We are nothing to them. BP, Exxon, Enbridge, etc., etc. They are all just alike in their lies and denials and coverups.

I have been keeping up with things since 2010 and I don't get my news from what comes on my TV. I learned that lesson real fast. They just tell you everything is fine, go back to your frivolity. The real news comes from everyday Joes like you and me that see what goes on and share it via Facebook, YouTube, Twitter, etc. The ones who don't stand to make a dime, those are the truth tellers. The man in the suit on TV is just a puppet. Kinda like the man in the Oval Office. Nothing but a puppet. All of them.

What I don't understand is WHY!? Why do the powers that be seem hell-bent on destroying our planet with fossil fuels? Did they not learn from history? The history of the Industrial Revolution, where the skies were so dark from burning coal that the sun was a rare thing to see. We are making the same mistake with oil and gas. Sure oil is just plain nasty and, well, crude. That is its name after all. Gas is cleaner to burn and it sure looks great on those commercials. As a hands on kinda guy I can tell you the engines that I have seen that were converted to run on it sure looked really clean on the inside. That is true. But the truth of what you don't see is the "catch". The process of fracking the earth to get to it is just stupid! It doesn't take a rocket scientist to look at a grade-school geology book of the earth's layers and figure that one out. But I am a little smarter than the average guy.

Yeah, I love my big V8 in my sportscar. I'm a hot-blooded American male. It's in my DNA. It makes my blood pump through my veins to hear that rumbling sound. To feel that horsepower. To ride that controlled explosion of gasoline. But now, I only fire it up on occasion.

My Grandaddy built engines and fixed them, my Daddy built some of the craziest big-block Chevy's that would rattle the windows of our neighbors' houses. Everybody wanted one. I have seen it, lived it, loved it. But as with all good things, they have a season. And the season of fossil fuel needs to be over. Like I said, I love horsepower, but it really would not bother me if that engine were replaced with electric or hydrogen, or ran on hemp oil. I could give a care. As long as it throws me back into the seat, pushes me up against the side of the door as I floor it through a cloverleaf junction, it can run on little hamsters on a treadwheel. Well maybe not hamsters, I do love animals too. But you get my point.

Something has to be done. There has got to be some way to end this addiction. To stop this madness. It's a lie that we need oil to make plastic. We can make it with hemp. No, not the dope-smoking kind. I'm talking about the stuff we used to make rope with. You know, a hemp of rope. That used to be real.

I really wish that I hadn't "woken up" Because all I really want to do is go back to sleep now, but I just can't. I'm wide awake now. And I'm very angry at what I see going on.

Consider this your "wake-up call." You have two options after reading this. You can either be part of the solution, or you can just be part of the problem.

**********
Charles Taylor is a 39 year old refrigeration technician, in Bay Saint Louis, Mississippi. He has lived a block away from the beach for 16 years. Taylor has always been into cars and mechanical things. He says, "I have spent a lot of time out on the water to escape the real world of working. Now I don't have that escape anymore, because it stresses me out to go out there and time and time again, see the damages done by the oil and Corexit."