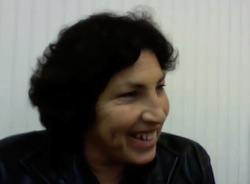 Clarice Friloux is a resident of Grand Bois, a small community bordering Terrebonne and Lafourche parishes in Louisiana, and works as the outreach coordinator for the United Houma Nation. Friloux spoke to Bridge The Gulf and the Institute for Southern Studies for the report Troubled Waters: Two Years After the BP Oil Disaster, a Struggling Gulf Coast Calls for National Leadership for Recovery. Friloux discussed living next to the oil industry, and the future she envisions for her tribe and her home.

Bridge The Gulf / Institute for Southern Studies: Tells us about your role as outreach coordinator.

Clarice Friloux: My position as outreach coordinator started right after the BP spill. And so what I do is, I go into the Native American communities to find out their needs. Most of the families that live on the bayous depend on the Gulf for their food and income. The BP spill was in April, which was the end of the school year. And then in August we saw a change where parents were not able to buy supplies for school or school clothes because they didn’t have any work. So that’s where my job started off, and I’m still doing it now.

BTG / ISS: How do you see things like gender, for example, affecting your community?

Friloux: I think the women are becoming more and more educated. They want to further their education. That I see. I see that a lot. The younger girls, in high school, they’re preparing for college. Before, all you needed was to graduate high school and that was it. Now I can see the change, where they’re furthering their education. And also our younger guys, too, are trying to get a better education because 10, 15 years ago you didn’t have to graduate high school. You could just get on the boat and make a living, and not have to go to school for four years or six years or whatever. Now I think they realize they may not be able to live off the land like generations before them. So it’s changed the people.

BTG / ISS: What is missing from the national conversation about the Gulf?

Friloux: We’re all dependent on the oil and gas industry, and we all know that the oil and gas companies are making a ton of money off of our waters. And we see our roads being destroyed, we see our communities being destroyed, we’re seeing land loss. And no one seems to care. It’s like, let’s just rob Louisiana or the other coastal states of their riches and just leave them there with these open bayous that you have pipelines running through, and just say, “Well, we got what we wanted out of there, and just let them figure out how they’re going to save their communities now. We don’t need these people anymore, because we can just go out deeper and drill deeper. We don’t have to exactly go through Louisiana highways or Mississippi—we can go anywhere in the Gulf.” Deepwater drilling, years ago, they had certain places they’d go, like through Grand Isle, Fourchon to get to the Gulf. And now they have directional drilling, they have different things they can do without having to, say, use our lands. I feel that we’ve been used, and we’ve been robbed. And as much profits as these oil companies make, it seems like they can return something back to the communities, or in general, the state itself.

Friloux: I would like the oil and gas industry to maybe have a little more respect for what they do with their waste—the byproducts of the oil and gas industry. Dispose of it better, in a safer way. That’s about it. Just save Louisiana—save the whole coast. But let our people stay where their ancestors are from and don't tell them that they have to relocate to another community and change their way of life. Just let them be how they are. They’re happy there. They’re not city people. They want to live on the bayous. They want to speak their French language. They want to be able to have seafood balls outside. They want to be able to start up their mudboats outside. In a subdivision, you will not start a mudboat like that. People that I know get out of their houses, they walk across the street, their boat is there, and they get in it and go. Or they want to throw a cast net right outside their door and have fresh seafood. I wouldn’t want to see that change. I would love to be able to call my aunt, because my aunt’s one of those people who live right off of the bayou, call her and say, “Shrimp season opened this morning at 6 o’clock. It’s 10:30. What was the catch like?” and “I’m coming down with ice chests for the shrimp.” That’s what I’d like to see continue. But there’s no promise.

BTG / ISS: What are the big solutions?

Friloux: Rebuilding our lands. Stopping the erosion would be the first thing. Put some rocks out there. If you can’t build barrier islands, put up some rocks, and rebuild some marshes. Just let nature do its course.

But if you’re the oil and gas companies and you’re going to dig a trench through marshlands, when you’re finished with that canal, refill it. Don’t just block it off with no access. Put the mud back where you took it from. Put the land back. Plant some new trees. Do whatever. Bring it back to its natural state. Don’t just leave it there battered and beat. Because that’s what they’ve done to the Louisiana coast.

You can see it on film. From the sky you can see the damage that’s been done, and it should have been repaired. But they just left it.

BTG / ISS: What support do you need to keep doing this work?

Friloux: The support of my family. My family’s 100 percent behind me. Even 17 years ago when I was fighting this oilfield waste site, without the support of the community and my family in general, I could have never done it, if my husband wouldn’t be my sidekick. Every conference that I want to make, he’s there. He doesn’t speak at the conferences—he’s just starting to want to voice his opinion. But he’s there. And even when I was going to conferences when my children were young, my mom would keep my kids for me.

It’s a lonesome thing to do. I remember my daughter telling me, “Mama, when are you going to get off the phone?” Or them sleeping in the backseat of my car driving back from Baton Rouge after a Senate hearing. They were there with me, and they lived it. It’s just, you want to keep your community like it is. You don’t want change—not bad change. You want to see things happen, but you don’t want to see it destroyed. You want to be able to say, all these trees are here. I see in my community our trees have been knocked down, we have these big pits with oilfield waste in them. You try to enjoy yourself on a Sunday afternoon and if they come unload a truck full of waste you might as well go inside. Your day is shot.

But just knowing my grandfather was there, my grandmother, my mom was raised there, I was raised there, and also my children and now my grandkids. So we have five generations still living in the Grand Bois area where I’m from. It’s home, and you want to fight for your home. Just like with anything else you own, you fight for it.