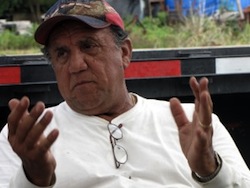 Two years ago I was in New York to address the United Nations Forum on Indigenous Issues when I received a phone call that an oil well had exploded in the Gulf of Mexico.  I was not alarmed at first.  My community has lived side by side with oil wells for decades.  I worked for many years as an inspector of oil wells.  I firmly believe that the vast majority of drilling is done safely and with integrity.  “Accidents happen,” I thought.  I was sure that by the time I got back home to Louisiana, the well would be capped and the clean up would be well underway.

When I got back home a few days later, I quickly realized just how wrong I was.  Our typically quiet community was turned into a busy staging ground for BP clean up efforts.  News crews descended on our bayous as members of our tribe went to work day and night setting up barriers to prevent oil from washing up on our shore and tainting our many sacred grounds in the marshes.  Days turned to weeks and months as oil continued to gush into the waters surrounding our island.

This nightmare took an unspeakable toll on our community, both emotionally and financially.  Our fishermen were out of work and the major sources of food for local families — oysters, shrimp, crabs — were off limits to consumption.

Two years later, the BP oil spill seems no longer newsworthy, no longer politically expedient, and one that many believe has long been settled.  The fact of the matter is that this event continues to have an adverse impact on the lives of the most vulnerable:  the working poor and disenfranchised communities.

Negative health effects have begun to surface for those who worked in the cleanup efforts.  Oyster and shrimp populations have dwindled drastically as other forms of marine life are washing up dead on coastal shores.  Two years later our coast is still suffering.  And our community has yet to see any compensation for our losses.

And as we work to heal the wounds left by the BP spill, there is another, perhaps even more devastating issue hovering over our heads – coastal erosion. Isle de Jean Charles has lost dozens of square miles of land surrounding the island, marsh which protects our community from storm surges and high tides.  The state of Louisiana recently released their plan to save the coast of Louisiana from vanishing.  Not surprisingly, Isle de Jean Charles has been left out of the master plan’s levee protection system.  We’ve known for a long time that officials believe our land is not worth the expense of saving.  I ask you, how do you put a dollar value on a community and a culture?  We are left with difficult options.  There are many families who vow to stay on the island until it washes away.  But there are many members of my tribe and family who have already been forced to move by hurricanes.  Members of my tribe who have had to scatter across the country and would like to return home, but they have no home to return to.  My tribal council and I have been traveling far and wide to meet with government officials to ask for help in finding a place for our community to live together again.  They all want to listen to our cry, and then we never see or hear from them again.  Yes, I get mad and frustrated but we will not give up the fight and ask for your prayers and support and ask that you spread the word about the plight of our community and hundreds of other communities just like us along the Gulf Coast that will soon lose our land, our home and sadly, our culture.