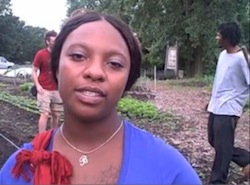 Editor's Note: Standing up for justice runs in Courtney Oats' family.  The 21-year old college student in Eupora, Mississippi is the great niece of Fannie Lou Hamer, and has been a community organizer since her teens.  Recently, Courtney has turned her energy to, in her words, "change our food system… and organize about healthy eating [and] social justice."

But when Courtney tried to do just that, she says she faced harassment from the local police.  In August 2011, Courtney set out to hang fliers advertising the ground-breaking of a community garden. The event was part of a national "Food Freedom Ride", which drew connections between food justice and the Civil Rights movement.   While hanging fliers, Courtney says she was challenged by a police officer, who told her, "Don't bring that here."  Later that day, Courtney says the officer came to her 14-year-old sister's birthday party to stir up trouble.  The officer threatened to use a taser on Courtney and her sister Kayla, called their mother Cherraye (also a community organizer) a "black b****," and arrested Courtney.

Cherraye says that the arresting police officer, who is African American, "does the bidding" of the white authorities, who are often repressive towards African Americans, gay people, and low-income whites in their area of rural Mississippi.

Photo: Courtney Oats at the community garden she helped plant in Eupora, Mississippi. From LiveRealNow.org.

Here is Courtney’s account of her arrest (quotes are to the best of her recollection):

On August 5th, 2011, I was hanging up flyers for the community garden groundbreaking.  I went into the Pure Gas Station and asked if it was alright for me to hang up a flyer.  My friend, who owns Pure, told me that was okay: “Yeah, baby.”

After hanging up signs, I was on my way out the door, when officer Q. Dell Caradine asked me why I was hanging up signs.  I answered him by saying, “I’m with a group of fellows who are trying to do something positive.”  And he said, “Don’t bring that here.”

The flyer had a picture of a bus on the road and dates of the Food Freedom Ride.

I asked him what did he mean.  And he stated that, “Bringing people into our town can get you in a lot of trouble.  Is that what you want?”

I just smiled.  And he said, “I’ll catch you later on,” and he laughed.

By then we went to go get my sister’s cake, who was turning 14.  And all her friends started to arrive at the Masonic Hall in Eupora.  The children were dancing and having fun.

I was there 2.5 hours when the police showed.  The children who were just entering and they said to my mother, “Miss Cherraye, the po po outside.”

My mom said OK, let me go check and see what’s going on.  She was exiting out the door and a lady by the name of Gina Hunt ran up and said, “Cherraye, I called the police.”

My mom said, “Why?” She said, “Because my son is in there and these grown-ups and kids are out here smoking and drinking.”     My momma said, “Who?”   She pointed to the adults who worked at the hospital, and my mom proceeded to ask them, were they smoking?  They said, “No ma’am, I wouldn’t hurt or harm Kayla or any other youth in that way.”  Then Gina Hunt said, “Oh, not them.”

Mom said, “Well, you pointed at them.”

Gina Hunt said, “I didn’t know I had pointed at them.”

We were standing 5 feet outside the building on a lawn.  That’s when the police interrupted.  It was the same officer that I saw in the store.

That’s when he said, “Who’s out here smoking dope and drinking alcohol?”

“Because I believe someone is doing so."

We said, “No, these are young kids.  We wouldn’t give youth alcohol or drugs.”

Mom said, “Q. Dell, you’ll go in when you pay $2 like the rest of them; I’m not going to let you harass these young people who are just here to have fun, because there is nothing for them to do in this community.”

“Cherraye, I’m going to ask you to move one more time,” He tried to push his way in by putting his hands on her shoulders.

She said, “Fine. You’re not going to find anything.”

He said, “I'm going to go get Robert Calvin Mays and shut this party down you black b****.”

Mays is the manager of building. He was across the street at his home.   That’s when they came over to the Mason Hall, and then he said to me “I told you I was going to be back for your a**.”

And I said, “OK.”   He went into the building, came out, and said, “There’s nothing going.” He said into his walkie-talkie, “I need back-up at the Mason Hall over here in Western County.”

Then we said, “What do you need back-up for? You didn’t find anything.”

That’s when my mom said, "Please just leave. This is my daughter’s birthday party.  We paid too much money to have this party.”

I said, “Why?”  Just before that, he had told my mom to go in the building and shut down the party before he’d take her to jail.  So my mom and sister-in-law went into the building to shut it down.

He said, “Because, you already know what you did, and you were hanging up them damn flyers.”

He asked me, was I getting smart, again?

“OK, you’re getting smart and trying to provoke me.”

That’s when he pulled out the taser gun.  First he aimed it at me. He was standing very close, almost within arms reach.  I put my hands up in the air and said, “What are you doing?”   “You’re provoking me.”

One of the girls who was behind me, Tiara, shouted, “Miss Cherraye, he’s got a taser!” She ran back in to get momma.   Meantime, because they had shut the party down, the kids were coming out.  He started aiming the taser to the left and the right.  The laser was actually going on the kids.

That really pissed me off.  Then he focused it at my sister, Kayla, the birthday girl. So I walked in front of her, and said, “Mr. Q. Dell, you are not about to tase my sister.  She’s 14.”

And that’s when he said, “Say something else and I’m going to take your a** to jail.”

I said, “Come on, Kayla, let’s go on inside.”  I walked into the building.

He said “Didn’t I tell your a** not to say something else?  You’re going to jail.”

So he ran up into the Mason Hall and pushed me onto the table and grabbed my hands.

“You better stay still or I’m going to stun you.”

I said, “You don’t have to rough-handle me so hard.”

He put my hands behind my back.  He tried to put the cuffs on, but they were too big.

There was another guy in there next to him at that point.  Steve Bingham.  I don’t know what his role is.  I hadn’t seen him enter.  He handed Q. Dell some other handcuffs and he cuffed me.

He turned me around and walked me outside.

That’s when the youth stopped. All of them that had been inside were now outside.

They said, “Courtney didn’t do nothing wrong!,” and other chants.  “Let Courtney go.”  “No justice no peace.” “We’re not going anywhere." They went to sit down.

He had me by the handcuffs and spoke into his radio, and said, “These kids are getting unruly."   Right then, the K9 unit truck pulled up. An officer got out and let the dog out.  He had it on a long leash and let it chase the children.  The kids were running and screaming.

That’s when my sister-in-law, Samantha, said, "Don’t worry about it, Courtney, we’re going to come get you.”

I said. “Alright.”  That’s when he shoved me into the car with force and as that happened my head hit the doorframe.  The handcuffs were behind me.    Q. Dell asked the other officer, “Do you need any help?”  He shut the door.

He waited for a response from the other officer…and then he got back in the car about 15 minutes later.

By then, it was about 10:18. He radioed in to let them know he’s bringing me in to the station.   We arrived at the station about 10:21, and then at that time, he took me out of the car and took me into the station.  My aunt Patricia, who is a bail bondsman, had made it to the station, and she stated, “I’m here to bail Ms. Oats out.”

“Well, Ms. Oats, you can’t bond out today.”  Aunt Patricia looked at him like, you know what you’re doing.

“Go ahead and get her fingerprinted so we can put her in jail.”

Patricia asked if we could still post bond so we could at least get her out tomorrow morning.

Then they fingerprinted me and took me to my cell.

While I was in my cell the whole night, whenever he was in the building, he would come back there and say little things, such as, “I told you I was going to get you one way or another.  If I can’t get your momma, I’m going to get you.”

Courtney and Cherraye Oats are organizers with the Fannie Lou Hamer Center for Change.  Courtney is also a college student and a 2011 Real Food Fellow.