My BP Story: Uprooted from Home, a Fisherman Wonders What’s Next 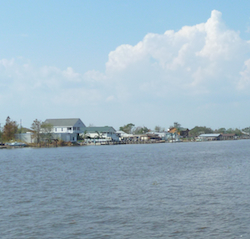 And then After the BP oil spill; the charter business evaporated to nothing. The company was going to shut down the business and sell the property. We had to vacate the property immediately so they could put it up for sale. Needless to say we lost our home and I lost my job as a charter captain. Also at that time, commercial fishing was closed.

We had to move, we looked all over, we had no luck finding any place we could afford in Barataria or across the bayou in Lafitte. Nothing was available due to the flood of workers from all over the country seeking employment by BP to clean up the oil spill mess.

Photo: Houses along the bayou in Barataria, Louisiana.

We had a meeting in Lafitte with BP claims administrator Mr. Kenneth Feinberg [head of the Gulf Coast Claims Facility (GCCF)], and he told us that they figured it would probably take at least three years for things to get back to normal. He said BP was going to pay us our losses for three years, starting with a six month emergency payment. And he said, then in six months we would start receiving interim payments every six months for three years. We did get the six months emergency payment, so we believed what Mr. Feinberg and BP told us about getting interim payments for three years. Being made homeless and suffering the loss of two incomes (charter & commercial fishing), because of BP’s disaster, we were in strange territory.

We had to make serious financial decisions based on what Mr. Feinberg and BP told us about getting interim payments.

Desperate for a place to live, we moved to Lumberton, Mississippi, thinking that after the BP oil spill was cleaned up, we would be able to move back to Barataria. Then, after six months had past, we went to GCCF claims office in Laffite, Louisiana, to sign up for our first interim payment. We were shocked when they told us that BP was not going to make interim payments. I felt that Kenneth Feinberg and BP lied to us, and cheated us out of three years of interim payments that they promised us. With commercial fishing still closed because of the oil spill we had zero income.

Fishing was still closed and we were broke, and like everyone else, we had to pay bills. So, on March 14, 2011, we were forced into taking a so-called final payment. The final payment meant we got a lump sum settlement, but cannot file future claims with GCCF. We felt we had no choice but to accept a final payment.

Now we can't afford to move back home to Barataria and we are stuck living in Mississippi. Most of our family lives in the Lafitte and Barataria area. We were a close-knit family, and prior to the BP oil spill disaster we would see each other on a daily basis. Now, that is non-existent. We really miss our families!

We started commercial fishing again in July of 2011 commuting from Lumberton, Mississippi to Barataria. But something’s wrong – the fishing is nowhere near what it was before the BP oil spill. And the expenses are so high with the commute (it’s over 100 miles each way), most times we don't make any profit. My wife and I are both 54 years old, and this has been very hard on us.

Right after the oil spill, I was diagnosed with cancer on my face, and it is spreading and growing into my eye, and I am in fear of losing my eye or as a doctor told me I could even lose my life. I have high blood pressure but can't afford to go to the doctor for anything. Also before the oil spill my dentist had put braces on my teeth and they are still there today because I cannot afford to go get them taken off. Before the BP oil spill, we were fine, we had no problems paying for our medical and dental treatment or anything else we needed.

Now, we are so far behind on our bills, our once good credit is ruined! We have been turned over to collection agencies and the phone calls don't stop. We no longer have any joy or happiness in our lives because of BP’s oil spill disaster.   How can BP keep putting those commercials on TV saying that everything is back to normal and even better than before? It makes me want to cry everytime I see those commercials, because I know that our lives are not back to normal, we can't even get back home to Louisiana, to live like we did before the oil spill.

We are really suffering mentally, because of this disaster, our lives as we knew them before the oil spill are over. We have been suffering financially, forced to neglect our health, and living in poverty. We miss our families and seeing the kids grow up.

Is this really the way that me and my wife are going to have to live our last few years of life? Are we really going to be swept under the rug by BP? We worked hard for all our lives to be where we were, before the BP oil spill disaster. But now because of their mess we are broken and in despair.   I pray that someone who has the authority will understand our circumstances and have some compassion for our situation, and really make this right for us.