There are No Monsters Shooting People in New Orleans

On Saturday, the Original Big Seven Social Aid and Pleasure Club paraded again, retracing their steps, and beyond—to the end of the route they never got to complete a few weeks ago.

Arriving at the site of the Mother’s Day shooting, each of the three divisions of the club paused. They took a moment to remember—to grieve, and to heal. In the middle of the intersection, club members kneeled, took off their hats and prayed. They erupted moments later in dance, as a misty, gentle rain pattered down. One man looked up and recognized the rain with a nod. “Holy water,” he said.

Yet while my spirits were lifted, I am also still yearning for justice—and not a surface-level justice measured by high prosecution rates and filled jail beds. As a community, we need better ways of talking about violence and its systemic roots; deeper ways of healing after trauma; and stronger movements to support communities fighting for structural change. The Dalai Lama last month delivered a clear message to our city: we must treat all living beings with loving kindness. Central to this, I believe, is an acknowledgment of the connection between structural economic violence and street violence, and a willingness to see the humanity in others. Ultimately we must recognize that there are no monsters shooting people in New Orleans.

Have you ever assured a child there are no monsters under her bed? Monsters are scary for two reasons: you can’t see them and they’re not human like you.

Monsters on the streets are a similar illusion. We know that perpetrators of violence are human, and we can see them, if we care to look. 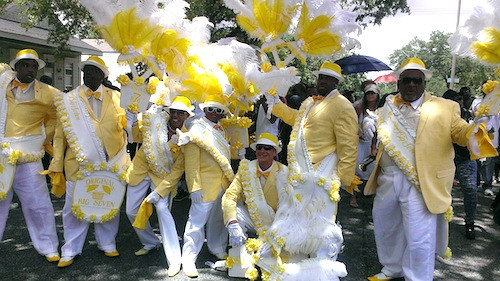 The world is not divided into monsters and the rest of us. Bad guys and good guys. Offenders and victims. The guilty and the innocent. I firmly believe that we cannot move closer to justice without deconstructing this victim-perpetrator dichotomy.  Akein Scott, the 19-year-old accused gunman, is not a monster or an animal. His mother carried him in her womb under the same laws of biology and backache that I carried my son. I’m not saying I love him; I’m not there yet. I know nothing about him, most notably whether he even was the shooter. But we cannot stuff him in the category of “other;” when we do, we rob both him and ourselves of the most elemental dignity. He is one of us.

Ka’Nard Allen, one of two children shot on Mother’s Day, is also one of us. Ka’Nard was actually shot about a year ago at another mass shooting. His five-year-old cousin Brianna Allen was killed that day, along with a 33-year old mother of three. The timing was particularly cruel; that mass shooting took place at Ka’Nard’s tenth birthday party. We can think long and hard about what the future holds for this young boy, and we should. It is harder, but crucially necessary, to also think about the individuals who shot him.

I do believe in individual responsibility, and I join many of you in denouncing the shooter's reckless disregard for life. I also believe in collective, community responsibility, and want to talk about how we, as a society, so fundamentally failed this youth. Animalizing him to comfort ourselves keeps us from asking the questions that really matter.

We all want to live in a community where things like the Mother’s Day shooting don’t happen anymore. To do that we must tackle, piece by piece, massive systems that have cemented in place structural inequities in every fundamental area of our lives—in housing, education, health care and food access, to name a few. There are no silver bullets to curb the kind of bullets that rained down on Mother’s Day. Massive structural problems require massive overhaul; there’s nothing pretty about that.

If you need some convincing that things are in fact as broken as I’m arguing, here are some highlights of just one system begging to be dismantled—our criminal injustice system.

There are no easy solutions, but in short, we need fewer guns, fewer jails, and less racism. We need more healing, more restorative justice, and more structural equity.

Still not convinced? Talk to 70-year old New Orleanian Rebecca Glover, who lost her fourth family member to gun violence a few days after the Mother’s Day mass shooting. Ms. Glover has been a tireless advocate in the case against the NOPD officers who murdered her nephew, Henry Glover, after Katrina, then burned his body. She recently told the Times-Picayune, "The system is not helping. Putting [the shooters] in jail is not helping them because when you put them in jail somebody else is taking their place. It's like a revolving door."

The stories of gun violence are hard to swallow. But we do swallow them, so often we’ve forgotten how to breathe right as a society. Part of this is because the roots of the gun violence crisis can be hard to isolate, especially in a thirty second TV soundbite. Another reason is that the scale of the problems can overwhelm us as individuals. We see much larger entities failing, like local governments and police departments, and too quickly surrender our power as agents of change. The truth is that millions of us have already been personally affected by gun violence, poverty, racism and underfunded schools. We can change the criminal injustice system. Hell, we could build a whole new world if only we believed we could.

I find tremendous hope in the work of organizations that tangibly bite off a piece of what is wrong, then chip away for individual, community, and structural-level reforms. Locally, my hat goes off to groups like the Orleans Parish Prison Reform Coalition, Voice Of The Ex-offender, the New Orleans Workers’ Center for Racial Justice, and the Juvenile Justice Project of Louisiana, who have won significant wins in the criminal justice arena. Please, support their work and get involved in some way.

I also find profound comfort remembering the thousands of attentive parents and understated neighborhood activists who mentor our youth—they’re doin’ their thing in churches, homes, community centers and streetcorners all over New Orleans. The Original Big Seven, like many Social Aid and Pleasure Clubs in the city, does precisely this kind of work. Club members mentor an all-youth Mardi Gras Indian tribe, the Red Flame Hunters. And they host their second line on Mother’s Day with the explicit purpose of giving “something back to the women of the world.” As Ed Buckner, President of the Original Big Seven, said, “Crime and violence in New Orleans is a systemic problem and we strongly believe that safeguarding our cultural heritage helps to address the roots of violence. We are a cross-generational organization, ages 5-70. Our young people grow up in this culture, are fed by it, and feel loved, supported and connected in ways that build neighborhood security. That’s real crime prevention.”

Underneath this panorama of players and problems lies huge questions about resources. Ultimately, the more Louisiana continues to feed its addiction to large-scale incarceration, the less money we have for things that would actually reduce the prison population and make us safer. It’s time for a big shift in our priorities, ya’ll.

As we contemplate that shift, let us focus on how to be, in the words of the great New Orleans poet Sunni Patterson, better “solutionaries.” As we reflect on tragedy and injustice, I pray that we begin to heal and that we each find some small way to transform our anger, fear and sadness into action for social change. And what better place to scheme and dream than next Sunday at the second line? I look forward to seeing y’all on the street.

Nikki Demetria Thanos is a mother, Popular Educator and attorney who believes in building strong, base-level movements to fight for racial and economic justice.  Her partner and nephew are members of the Original Big Seven Social Aid and Pleasure Club.  From 2001-2005, she worked to strengthen cross-border organizing on drug and trade policies between the U.S. and Latin American social movements.  Nikki is the author of “A Handbook for Social Justice Activists Thinking About Law School” and co-author of Trouble in Paradise: Globalization and Environmental Crises in Latin America.  She created the puppet-theater production, The Drug War Roadshow, in 2006.  She currently works at the intersection of law and organizing from her home in New Orleans.