The Time For Higher Standards 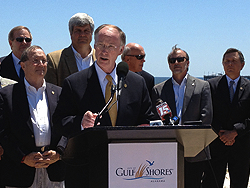 As I have mentioned before, the last few weeks have been challenging for BP. The “new” information now streaming across the airwaves regarding sicknesses caused by the toxic mixture of crude and chemical dispersants used to "clean" the oil; the mutations and higher than normal mortality rates in sea life; the unjust and inconsistent release of payment to devastated fishing families; and the continuing effects of tar balls and mats still invading Gulf marshes and beaches, have no doubt weakened the misleading rhetoric that this corporation has tried to shove down the throats of the global population through its multimillion dollar advertising campaign.

All this “new information” is not new – Gulf Coast citizens have been saying the exact same thing for three long years. We have just been unable to get above the cacophonous voice of BP’s money. A person would not have to look further than Bridge the Gulf’s blog to find citizen reports concerning each of the issues listed above – it’s just that few would listen. In fact, even to this minute, not one Gulf state representative, or federal entity or agency, has publicly approached Gulf Coast communities impacted by the BP disaster or responded to any of the reports and studies recently released.

Therein lies the problem. It is not just BP who has let the people of the Gulf Coast down, it is also a vast array of federal and state politicians and entities who have silently ignored the very public they have sworn to protect.

Given the government’s role as a lawmaking and law-enforcing body, it is wholly within its power and responsibility to address the inequities that plague our Gulf Coast communities. And yet, they refuse to do so.

In fact, and as exemplified by Alabama Governor Robert Bentley’s announcement of the use of National Resource Damage Assessment (NRDA) monies to build a lodge and convention center, many of the money hungry politicians are more concerned with their own pocket lining than ecological or human health needs stemming from the disaster.

It seems to be the least of many of our government officials' worries to help us move toward a region in which human and ecological rights trump the needs of corporate profit and greed.

Not that is comes as much of a surprise. History itself easily exposes that these governments have rarely met human rights standards in the Gulf Coast region – at least, not without significant pressure from their constituents.

That is why we must now, perhaps more than ever before, make it a priority to hold these governments and their policies accountable for their lack of leadership on our behalf. Aside from a few loyal representatives, the people of the Gulf Coast have been denied justice – civil, environmental, social and cultural, with regards to this disaster.

And sadly, BP’s catastrophe is no more than a symptom of a much larger problem: The continuing lack of true and absolute representation within Gulf Coast, and lack of federal political leadership and agencies that are reflective of the needs of Gulf Coast communities.

The only Gulf Coast vision that should be acceptable to its citizenry is one that is all-inclusive, and goes well past the urgent need of that which the BP disaster has brought us. We need a governmental system which upholds our human, ecological, civil and cultural rights to genuinely affordable and decent housing, available working conditions that provide dignity and safety as a top priority, a decent and equal living wage, a healthy and thriving environment, equal and effective educational opportunities, an end to poverty, hunger, and homelessness, free elections, a criminal system that is fair and does not target, over-police, or over-incarcerate any particular group, and equal protection and voice to all citizens under the law.

It is time for us to demand our legislators help us to design this vision of our future. And for those who decline, either by lack of oration or deed, it is time for them to get the hell out!

For the rest, they should be aware that time of higher standard has come, and that the response to BP’s crimes in the Gulf Coast is merely a beginning.