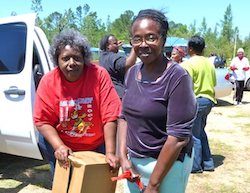 On a beautiful late afternoon in early May, Dedrick Benison and Michael Calvin are quietly surveying the house that came crashing down around them just a week before.  On April 27th they were watching a movie here, a neighbor’s house on the catfish farm where the men live and work, near Forkland, Alabama.  Moments later a tornado collapsed the roof and ripped off the kitchen wall, sending furniture and splintered wood flying.  The men scrambled out a living room window to escape.

As terrifying as it was, the evening could have gone much worse for the roommates.    We walk no more than 30 yards away, to all that’s left of the small two-bedroom they shared – the house where, but for a seemingly mundane decision, they would have been that evening.

“This is the house,” Benison, 31, points to its tile-floored footprint. “This is the sides and top,” he gestures towards a mound of debris piled a couple of feet away, once a roof, walls, and furniture.

Ethel Giles, a neighbor and community leader who is there to deliver donated supplies, states the obvious: “Good thing you felt like watching a movie.” 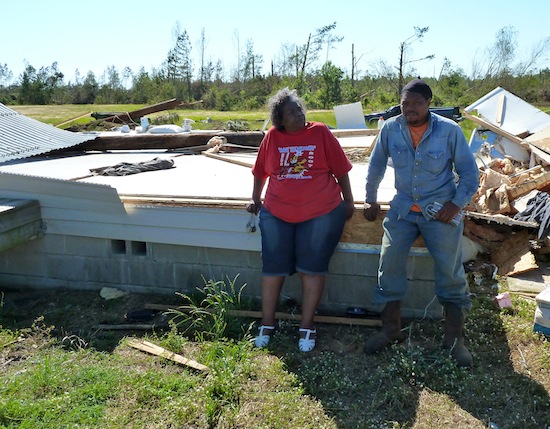 Still here, but left with what?  No home, disrupted work (the catfish farm was wrecked as well), and not much by way of food or clothing.  Benison’s truck survived, but Calvin’s was flattened.

For now, they’re depending on government and private agencies like FEMA and the Red Cross; local community-based organizations; and on the generosity of family; friends and strangers; people like Ms. Giles.

Ethel Giles has spent the day sorting and delivering toiletries, non-perishable food, diapers, and flats of bottled water to twenty-two households.  Five o’clock is fast approaching, and Benison and Calvin are her last stop in rural Greene County.  Ms. Giles still has a 50-mile drive ahead, to another rural community she’s heard has been hit.  And then it is back to Forkland, where her home, too, was struck by the storm. 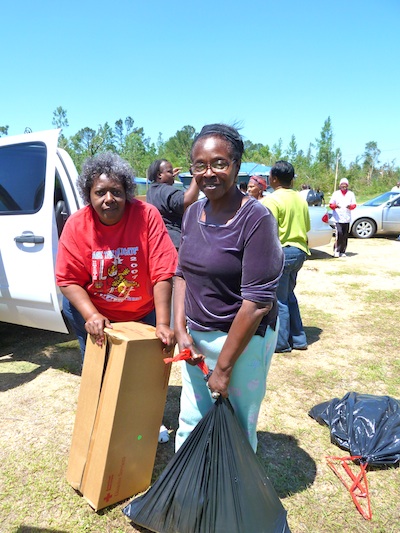 When it’s not six days after a major disaster, Ms. Giles works for the Federation of Southern Cooperatives to coordinate a local farmer’s market, and manages accounting for the Federation's Alabama affiliate organization.

John Zippert, Director of the Federation, says their ongoing work to develop cooperatives and credit unions with farmers, fishers, and African American communities in the rural South is, "part of the civil rights and economic justice struggle."

For now and the foreseeable future, Ms. Giles and the Federation have been thrust into a critical role: helping hundreds of people in small, rural communities in western Alabama get immediate relief and begin the long process of recovery.

When a massive outbreak of tornadoes riddled the South (beginning April 15th 2011 and intensifying on the 27th and 28th) Alabama made the news as the hardest-hit state.  Tuscaloosa (population 90,468) became an emblem of the destruction.  It was hit by a tornado nearly a mile wide.  At least 27 people died, and whole blocks were flattened.  President Obama visited the city on April 29th, saying, "I've never seen devastation like this," and declaring a major disaster in the state. 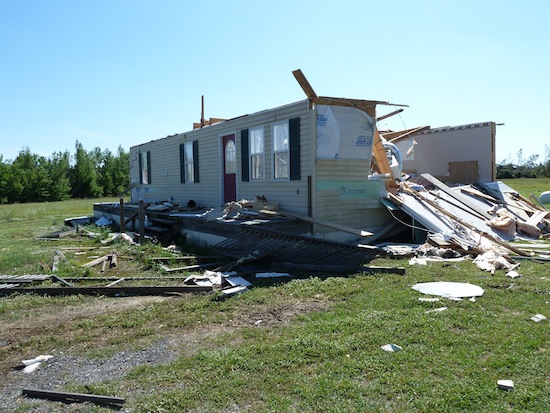 The house where Dedrick Benison and Michael Calvin weathered the storm.  They crawled out the window on the far left.

The widespread destruction and high concentration of hurting people in Tuscaloosa and Birmingham (the state’s largest city) rightly attracted attention and resources.  Big disaster relief organizations like the Red Cross, state and federal agencies, churches and faith-groups, and non-profit organizations responded by quickly setting up large relief operations in these urban centers.

But it wasn’t just Tuscaloosa, it wasn’t just one tornado, and it wasn’t just Alabama that were hit.  305 tornadoes struck 21 states during the outbreak from April 25th to the 28th, with more than 300 fatalities across Arkansas, Mississippi, Alabama, Georgia, Tennessee and Virginia (Source: NOAA).

The flow of resources is not reaching all affected areas in this widespread disaster zone, especially rural, impoverished communities in the Black Belt.

In a report on the disaster, the Federation of Southern Cooperatives explains the challenge:  “Areas in the Black Belt that are extremely rural, and seriously economically depressed… are in danger of getting left out of the process of assistance… Individuals [are] not able to get out of the community to various supply relief hubs to pick up relief supplies.” 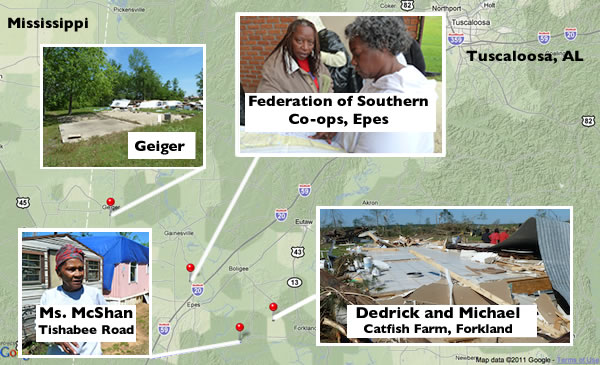 Map of some rural communities struck by tornadoes in western Alabama. Ms. McShan and Geiger appear in part two of this story.

In response to this need, Ms. Giles, the Federation, and other community-based organizations have emerged as critical bridges between resources and tornado victims in rural areas.

In the week after the disaster, things were not quite running efficiently, yet.  Ms. Giles and a few volunteers drove to Birmingham themselves to pick up the supplies for Greene County.  The trip took nearly the entire day and yielded just a pick-up truck and mini-van full of supplies – supplies that they quickly distributed the following day.

Even with piecemeal efforts like this marking the chaotic days following the disaster, the Federation says it has managed to supply 400 rural families in 8 communities with food, clothes, and other necessities.

It’s a good start.  But they have bigger immediate goals.  One is to establish the Federations’ Rural Training Center in Epes, Alabama (about an hour drive southwest from Tuscaloosa on highway 59) as a regional hub for disaster relief.  Soon, they hope to have 18-wheelers filled with supplies headed to their facility, which is located in the midst of four rural counties that were struck by tornadoes.

With this relief supply chain in place, the Federation can focus on what they do best: working directly with rural residents to begin rebuilding lives and communities. 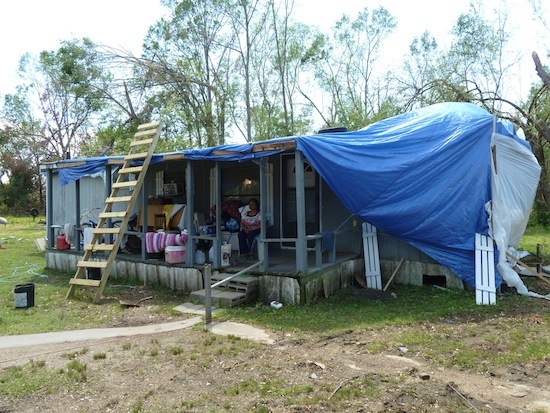 Pammie Shields sits on her front porch in Geiger, Alabama.

All photos and map graphic by Ada McMahon.