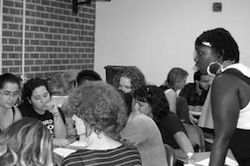 This new statement by the  Women’s Health & Justice Initiative condemns the irresponsible and demeaning use of drug testing to police the lives of welfare recipients.  We urge you to use the statement, and credit us, when addressing these intersecting issues, even if your political work is not centered around low-income women or women of color.

The issues and analysis we lay out have implications for the many areas of work we do-from criminalization and policing to economic justice to housing justice and reform and so many more. For more information, please visit us at www.whji.org.

Shana is co-founder of the Women’s Health & Justice Initiative, where she currently serves as Research & Advocacy Director (volunteer), and is the former Interim Director of the New Orleans Women’s Health Clinic she co-founded in 2007.   Shana is a member of INCITE! and currently serves on the Board of Directors of Women With A Vision, Inc. and Jane Place Neighborhood Sustainability Initiative, a local neighborhood-based housing and community development non-profit.