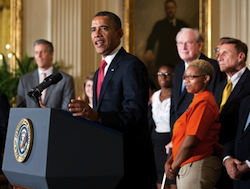 One thing is for sure: When it comes to how the billions of dollars in BP fines slated for the Gulf Coast is used by the states, advocates, watch-dog groups and citizens alike best keep their nose on the money trail. Businesses and political leaders are already making plans for the use of those funds. According to an article recently published by The Sun Herald, Trudy Fisher, head of the Mississippi Department of Environmental Quality, told 100 business owners, council members, supervisors, state senators and representatives that, “It’s important that Mississippi position itself for this money,” at a July 13 meeting held in Gulfport.

But it sounds like not all official and business leaders want to prioritize ecosystem or community restoration. The Sun Herald article also says that in addition to ecological restoration, Fisher listed "economic development, seafood promotion, eco-tourism.... job creation, and planning" as the primary focus for the money. The article notes that, "there was talk in the crowd about hotels and road projects," and quotes Jackson County Board of Supervisors President John McKay as saying, “You can only have so many boat launches and marsh places to be fixed. I want to know if some of it can be for brick and mortar.”

For the sake of the estimated 1,074 miles of Gulf Coastline oiled by the BP Drilling Disaster, the thousands of wildlife carcasses that have littered the shore since, a dead zone that spans 6,800 square miles, and the over 396,800 acres of wetland loss over the last 15 years – let’s hope the answer to McKay's question is no.

Here we are, well into July 2012, nearly 27 months after the explosion, sinking and gushing of the Deepwater Horizon oil well, and two years after the eventual capping on the well. That would be nearly 800 days of watching Iris Cross, and other BP-trained thespians, telling everyone to come on down to the Gulf for a surf, swim and a po-boy. I’m not sure how many days it’s been since the President came down in khakis, firm in his conviction to shake his head at the water, fill a to-go box with shrimp, and dog paddle around for a while in an inlet bay. But I can tell you it’s been over a week since he officially signed the Resources and Ecosystem Sustainability Tourism Opportunities and Revived Economy of the Gulf Coast Act of 2011.

The RESTORE Act earmarks 80 percent of BP's Clean Water Act fines to the Gulf Coast states to aid in the continuing recovery since the spill, and establishes the Gulf Coast Restoration Trust Fund to oversee how those funds are spent. That is a good thing. In fact, it’s an amazing thing when you think of all the citizens, advocates, organizations and bi-partisan leaders, who have worked hard over the last two years to bring this moment to fruition. This could be the largest and most influential piece of domestic environmental legislation since the Clean Water Act itself.

I’m happy the RESTORE Act passed. Please keep that in mind when reading this blog post. If there’s one thing those of us on the ground always knew about the RESTORE Act, it is that it is not perfect. Essentially, many believe, it comes down as a blank check written by BP, funneled through the U.S. government, to each of the five coastal states to use however they decide. Early on some advocates had suggested trying to influence the powers-that-be to spell out within the text of the bill that the monies should only be used for coastal restoration projects – and yet those worries fell on many a deaf ear.

Not that I am blaming anyone -- the idea of causing a potential delay (or worse, a clog) in an opportunity to throw a lifejacket around a (literally) drowning ecosystem is a risk that is hard to stomach. Yet after witnessing “activities” by Gulf states and local agencies concerning federal funds received from six years of hurricane disasters, it comes as no surprise Gulf Coast residents might fear a future of wasting away in KatrinaRitaville, searching for our lost coastline.

“When they took money that should have been for rebuilding the houses, and used it for the port [of Gulfport, Mississippi]... it was a huge misappropriation of funds, orchestrated by people who were not even from the Coast,” explains Long Beach resident Fritzi Presley. “[RESTORE Act money] is restoration money, it is intended to be used for restoring what was there, instead of providing for what can be,” she added.

Another important note is that 80 percent of nothing is still nothing – as Presley says, “There isn’t even any money yet.” The amount of funds available to coastal communities is yet to be known. If the Department of Justice decides to settle with BP, it could fall within a low estimate of $15 billion to a high of $25 billion. I bet you can guess the amount for which BP is shooting. Alternately what may happen (that is, if every analyst and Tarot card reader in the country is wrong) is that the United States, through the DOJ, and BP go to trial, leaving it to the courts to decide punitive damages. Of course, that would assuredly mean a larger amount of fines for BP and more funds available for the Gulf Coast.

Personally, going to trial is the option I like best. Not just because I look forward to the truth of how this disaster was handled coming out in deposition, but more because Keith Jones, father of killed oil worker Gordon Jones, has stated publically he would like it to be so. In my opinion, every one of those families deserves closure. Most importantly, how are we going to learn from our past if we do not honestly and completely investigate our mistakes? Sadly, sometimes for a corporation – especially for a repeat offender like BP – court is the only place the truth has a chance to surface and any real consequence be administered.

At any rate, even the DOJ end of the estimate is low-balled. According to an article by Antonia Juhasz, the real final bill for a letter-of-the-law itemization of fines BP owes is $192 billion. Although a $167 billion difference in fines may sound like going to trial is the obvious path, the trial isn’t even set to begin until January 13, 2013, and carrying it through would further delay the date on Gulf states’ deposit slips.

Whatever the final sum, the full magnitude of RESTORE will go far beyond the text of the act itself. How far in its address to the ecological needs of our often polluted, and regularly slighted region will be very much up to the citizens and advocates of the Gulf Coast, and beyond. As our not-so-long-ago history proves, ultimately the question of effectiveness will only be answered through a fair and unapologetic system of transparency and accountability in each Gulf state.

Truly, for Gulf advocates and citizenry, the real work of recovering from the disaster is just beginning.

************
Cherri Foytlin is a journalist, oil worker's wife, mother of six, and Louisiana resident whose family has been deeply impacted by the BP Oil Disaster and consequential moratorium on deep water drilling. She co-founded Gulf Change, blogs for www.BridgeTheGulfProject.org, and walked to Washington D.C. from New Orleans (1,243 miles) to call for action to stop the BP oil disaster. She has been a constant voice, speaking out to the Obama Administration's Gulf Oil Spill Commission, and in countless forms of media. Cherri will continue her fight for the industries, people, culture and wildlife of south Louisiana and the Gulf Coast "until we are made whole again."