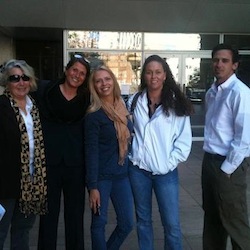 Three BP oil disaster survivors and community advocates were forcibly removed from the fairness hearing on the BP class-action settlement yesterday, moments before the federal court heard objections to how that settlement would compensate people made sick by the disaster. The fairness hearing allowed U.S. District Judge Carl Barbier to hear arguments from those who negotiated the deal, as well as those with objections to the class action, before the settlement is accepted or rejected.

Louisiana residents Cherri Foytlin, Kindra Arnesen, and Michelle Chauncey were asked by Judge Barbier to leave for allegedly "live streaming audio" of the hearings, and were escorted out by U.S. Marshals. The women were quietly listening to the proceedings and say they had no intention of interrupting, and don't even know how to “live stream”. They believe they were unjustly targeted because they have been speaking out for their families and their communities.

“It’s ironic – this is exactly the place where objections are meant to be heard and instead, we have four Louisiana residents forcibly removed because the court felt threatened that they might speak out,” says Bryan Parras of Houston, Texas - an environmental justice expert and Managing Advisor with the Gulf Coast Fund for Community Renewal and Ecological Health.

Objections to the Medical Damages in the Settlement

The fairness hearing is the final step before Judge Barbier decides whether to grant final approval of the class-action settlement reached between BP and the Plaintiffs' Steering Committee (PSC). The settlement covers economic and medical damages to individuals and businesses harmed by the BP oil spill, and BP estimates it will cost roughly $7.8 billion. Barbier is expected to grant final approval of the settlement in the next few days.

After the women were removed, the court heard objections to the medical component of settlement. Attorney Robert McKee argued that the narrow range of ailments that would be compensated by the settlement - eye, nasal, respiratory, and skin problems that appeared within 24 to 72 hours of exposure to oil - will leave out thousands of people who have become seriously ill from the disaster, including those with liver, kidney, and chromosomal damage. (Dr. Mike Robichaux, a Louisiana physician who has treated over 100 people with illnesses he attributes to the BP oil disaster, issued a similar statement earlier this week, saying, “If the BP-PSC agreement is accepted, the very serious illnesses being suffered by a large number of victims will be trivialized and these patients may lose standings in their lawsuits because of this flawed decision.”)

Judge Barbier responded to McKee that people with more serious ailments could opt-out of the settlement and pursue their own litigation.

Next, Attorney Jason Melancon objected to the settlement on behalf of this clients, low-income and mostly non-English speaking Hispanic men and women who were bussed into Louisiana to work on the clean up. He argued that these workers will face practical problems in getting fair compensation because they cannot afford to go to a doctor and get the tests needed to document their illnesses. The medical settlement uses a matrix (download) in which monetary awards are based on both the types of ailments and the level of proof the claimant provides.  Melancon argued that his clients would only be eligible for the lowest amount for clean-up workers, $1,300, a lump sum that would not be enough to cover their much-needed ongoing health care.

Around the time Melancon delivered his objection inside the federal courtroom, Kindra Arnesen shared a similar concern from the street outside. The settlement would likely allow her and her husband to receive damages as former clean-up workers, but she worries her sick children will be excluded. "Pediatricians treat them for everything but chemical exposure. Without the acknowledgement of physicians, there's nothing you can do," she said.

Arnesen and Chauncey are plaintiffs in the class action, and Foytlin has been directly impacted by the BP disaster as well.

Michelle Chauncey sold crabs in Westwego, Louisiana until the BP disaster put her out of business, and now works with a number of fishery groups. One of those groups, the Gulf Organized Fisheries in Solidarity and Hope (GO FISH) coalition, offered objections to the settlement at the hearing.

“I was unfairly denied my right to be in a courtroom that holds my life in its hands,” Chauncey reflected, “while all the lawyers who are there just to make more money got to stay.”

Arnesen, also a member of GO FISH, lives in Buras, Louisiana, a fishing community rocked by the disaster and its economic, health, and environmental fall-out. Her husband is a fisherman, and both of them have developed chronic health problems after working to clean up the disaster.

Cherri Foytlin, of Rayne, Louisiana, is a journalist who became sick after reporting on the BP disaster for her local newspaper. Foytlin’s husband, an oil worker, was out of work during the moratorium on drilling that followed the spill. (  Foytlin and Arnesen are both Bridge The Gulf contributors as well).

Through their own eye-opening experiences with injustice, these women began working to organize their communities and raise awareness about the ongoing impacts of the BP oil disaster on coastal communities. All the while, they continue to see their families, friends, and communities struggle.

"This is a group of people from the Gulf… sitting there in solidarity because there are real health issues that need to be addressed," said Drew Landry, a friend and fellow advocate who was also at the hearing. "It seems like [the court was] scared they were going to stand up and say something."

A few minutes before 3 pm, as an Attorney for the Plaintiffs’ Steering Committee was discussing the merits of the medical component of the settlement, Judge Barbier received a note from a U.S. Marshal, and called for a pause in the proceedings. After consulting with the Marshal, the Judge asked, "Is there someone in the courtroom who is attempting to or is live streaming the audio of this hearing?"

No one responded, and the Judge said the live streaming was coming from the back row. Confused about whether the iPad she was taking notes on was somehow connected to live streaming, a woman named Christine Breault raised her hand tentatively and said, “Well, I have an iPad?” She was immediately approached by a second U.S. Marshal and court guards, and told to leave.

The Marshal who consulted with Barbier then said, “She’s with two other people,” and that they had to leave too. The court guard asked Breault to identify whom she had come with, but she responded she was alone. (Breault and the other women have met through events and actions related to the BP oil disaster, but say they did not arrive together.)  The U.S. Marshall then looked specifically at Arnesen and Chauncey. “All three or four of you need to leave right now," said Barbier.

After Arnesen and Chauncey left, the U.S. Marshal said, "There's somebody else." The other Marshal and guards approached Foytlin and began to remove her. She said she didn't do anything. The Marshal said the live streaming was going to her web site. "I don't have a web site!" she said. Judge Barbier told her to leave immediately. The U.S. Marshals pulled her out by the shoulders, as she insisted she didn't have a website and hadn't been live streaming.

Once outside the courtroom, one of the Marshals asked Foytlin, "You have a Facebook page, right?" Foytlin responded yes. The two men then pushed her against the wall between two elevators and handcuffed her, while she continued to protest that she didn't do anything. Inside the elevator, they held her against the wall and told her to calm down, and that they saw on her web site she was live streaming.

Once downstairs, the U.S. Marshal told Foytlin he knew she was posting to her Facebook page, and showed Foytlin a print out of a photo, apparently as evidence of her "live audio streaming."

The photo was from a Facebook update Foytlin posted a couple hours earlier: 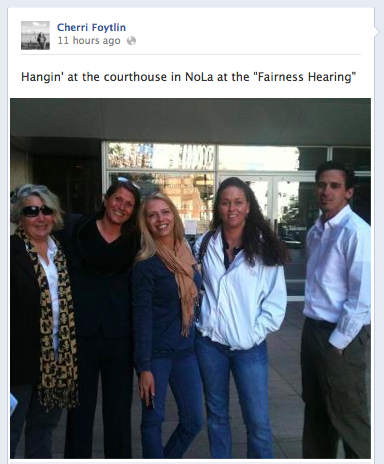 (That's Breault on the left and Chauncey and Arnesen third and fourth from the left).

The men, now there were four or five of them, a mix of U.S. Marshals and other courthouse security, then led her outside and released the handcuffs, and admonished her for being disruptive in court. Foytlin says they threatened to charge her with federal contempt of court and warned her that there would be "big time charges" with prison time.

It's unclear what the relationship is between the Facebook post and the alleged "live audio streaming." Taking a photo outside a federal courthouse is protected by the 1st Amendment. Foytlin had her press pass around her neck the entire time.

Inside the courtroom, a reporter with WWL-TV had been live tweeting the proceedings all morning. The court itself had its own "live audio streaming" set up – there was an 800 number anyone could call to listen live to the proceedings.

It seems the women had been targeted from the beginning – Arnesen said when she arrived at the courthouse that morning, a U.S. Marshal rode in the elevator with her and said, “I remember you from outside.” She took that as a reference to a February protest against the settlement outside the courthouse that Arnesen participated in, which was videotaped by federal agents. Foytlin says that another person who was at that February protest was turned away from the courtroom yesterday for lack of space, but heard a security officer say to another, “Is he on your list?”

From the sidewalk outside after being ejected, Foytlin said, "I'm a citizen, I'm a journalist, I was sick [from BP's oil and dispersants]. I had a right to be in that courtroom. They target people who speak up and tell the truth. It's supposed to make you scared, but it ought to make you mad."

That's certainly the effect it had on Michelle Chauncey, who fumed, "I'm supposed to be depending on this courthouse for justice?"

* This version of events is pieced together through the testimonies of the Foytlin, Chauncey, Arnesen, and Breault, of two people who remained in the courtroom after the removal, and from my own observation – I heard audio of the exchange streaming from the overflow room next to the courtroom, and came into the hallway in time to see Foytlin being pulled from the room and handcuffed. When I took a photo on my cell phone of Foytlin being handcuffed, one of the marshals or court guards grabbed my phone and told me I had to leave too. I got the phone back on the condition I erase the photo. I then rode down in the elevator with Foytlin and the enforcement officers and was ejected with her.

Updated Monday 11/12, 1 pm - The orginial version of this article erroneously stated that an earlier protest of the BP settlement happened in May of this year.  The "Rally for Justice" was held in February 2012.