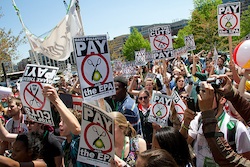 There is a moment between intending to change and actually making a change that is as large and silent as the far reaches of the universal plains. For some, it is a split second. For others it is years. For the collective conscience, it may be several lifetimes.

How easy it is for us to think that we are separate from each other, that who we are as a people is not entirely dependent upon who we are as an individual, and vise versa.

There are independent experiences that we all have, of course. Day to day activities, that can only come from one perspective and in one consciousness - yours. But further, there is collective actuality that is maintained through the human spirit.

I had the honor to find evidence of such at the culmination of my walk to Washington D.C., at an event called Power Shift 2011.

Power Shift is an annual event that gives host to around 10,000 young social justice advocates, faith leaders, entrepreneurs, student government leaders, blue-collar workers and students, that focuses on sustainable living and public service to not only the environment, but the humanitarian need for survival.

I was proud to walk and talk with people such as these - the forward thinkers, in my opinion.

While we were there we had the opportunity to be included on several forums discussing last year’s BP oil disaster, listen to some of the top social and environmental advocates in the world, and rally in front of BP's lobby headquarters, where we present a bill to British Petroleum for the $9.9 billion dollars they received from the American tax payer this year as a “rebate check" for the catastrophe.

But Power Shift was to me, more than just a call to action in defense of our environment and communities. It was proof that we can consciously embrace a world of justice and compassion. And that such a world can be manifested from within the miraculous power of the human heart, built by the Legos of individual passion.

As I looked out on the sea of faces, who followed us through the streets of D.C.- 6,000 on that day, all chanting in support of our Gulf, I was renewed.

There is a power that counters the cacophonous, hysterical energy that dominates so much of our popular culture today. This process, as found in Power Shift, can give all participants an opportunity to speak their sacred word, and in turn exercise the right to recreation of our collective future. 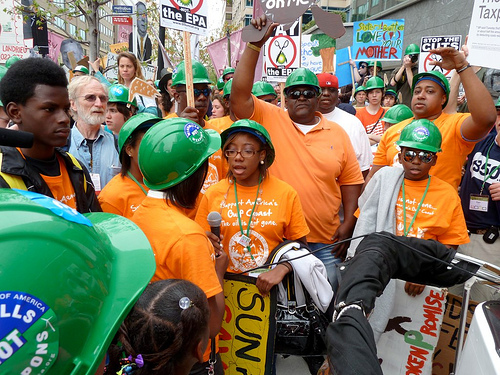 Photo Caption: Three girls from Biloxi, Mississippi sang in front of the BP lobbying headquarters in Washington D.C.: "I open my mouth to BP, and I won't look back."

Out of heart felt dedication to the common good, these kids reminded me that there is still a moral weight and momentum across this nation for citizenship.

While there are millions of people in America who are disgusted by sale-outs, bail-outs, cop-outs and drop-outs, too many of us have not been inspired to act.

The powerless claim that “Well, that is the way it has always been,” and questioning, “What can I do about it anyway?” has too often been a personal mantra in today’s world.

Truth is, Goliath is not that big, when you are standing with 10,000 people.

I walked to D.C. and I found hope, but it was nowhere near the White House. It was in the faces and the hands of our people.