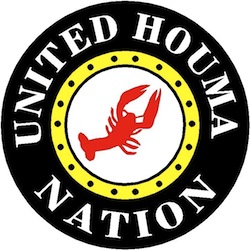 I am a citizen of the United Houma Nation (UHN), Louisiana’s largest Indian tribe with over 17,000 citizens. Residing along the Gulf Coast, Louisiana's wetlands are an integral part of the Houma's culture. Coastal erosion has plagued the UHN for decades, but the BP spill has placed the Houma's traditional way of life against the ropes.

The Houma Indians were originally located near present day Baton Rouge when famed French explorer Robert de La Salle first encountered the tribe in the 1680s; accordingly, the French named Baton Rouge for the red stick used to mark the Houma's border with a rival tribe. As Europeans continued to move into Louisiana, the Houma migrated south. Naturally, the city of Houma is named for the Houma Indian village located there. To this day, most Houma remain in the Terrebonne and Lafourche Parish area, and many continue to practice the tribe’s traditional way of life.

The modern Houma speak a variant of French long thought to be derived from the Cajuns; however, tribal leaders say linguists have recently proven the Houma language is a distinct language. Houma-Francais consists predominately of the version of French spoken in France circa-1700 blended with pieces of the original Houma language, a Muskegon dialect. Consequently, the Houma learned French from the French explorers who initially encountered the tribe and not the Cajuns. This means the Houma were speaking French before the Cajuns ever set foot in Louisiana. Unsurprisingly, Louisiana and France recognize the present day UHN as the progeny of the Houma tribe of old.

Recognizing the UHN as a tribe makes sense to me. After all, what other logical explanation is there for a contemporary Indian tribe located where the historic Houma tribe was last located, and speaking the language the historic Houma tribe would have spoken, than the contemporary tribe is the descendant of the historic Houma tribe? Plus many Houma continue to use the tribe’s traditional healing practices and remain dependent on wetlands for harvesting their meals. Inferences like this led renowned anthropologist Frank Speck to state, “...I should rate the Houma as a people possessing Indian blood and cultural characters to a degree about equal to that of the Creek, Choctaw, Catawbe, and Seminoles.” The aforementioned tribes are recognized by the federal government as the ancestors of the existing tribes. However, the federal government has been unable to connect the dots between the Houma encountered by de La Salle and today’s UHN; in other words, the U.S. does not consider the UHN a tribe.

When it came to discriminating against the Houma, their "Indianness" was never questioned. Houma Indian children were forced to attend a segregated Indian school until passage of the Civil Rights Act of 1964. Nonetheless, the US government has yet to determine the UHN's status as a tribe despite receiving the UHN’s petition for federal recognition in 1985.

The UHN was bitterly reminded of its lack of federal recognition in the wake of the BP spill.  Like the entire state, the UHN has been devastated by the spill, so the Houma filed a damages claim with BP. BP denied the UHN's claim because the tribe is not federally recognized.

Oil companies have long been the UHN's major nemesis. Oil was initially discovered on Houma Indian land in the early 1900s. As the Houma did not speak English, oilmen were able swindle the Houma out of their lands. A common tactic employed by oilers was to communicate the transaction was a land lease; however, the contract was actually a quit-claim. Resultantly, the Houma lost ownership rights to the lands that had fostered their culture. 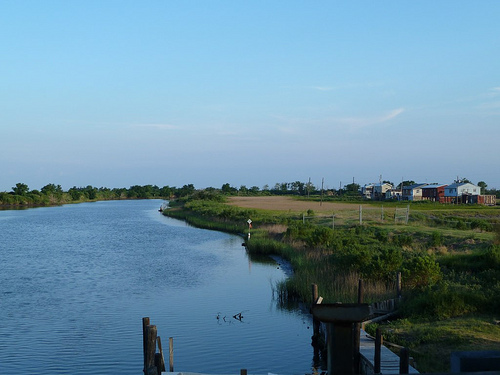 Environmental damage soon came to the land the Houma no longer owned but still were dependent upon for their survival. Oil companies dug canals through the wetlands to facilitate the transport of oil field equipment. Unquestionably, moving massive drilling paraphernalia through water is easier than carting it across marsh, but most easy roads in life have high long term costs. In this case, the road's
toll is accelerated wetland loss. A byproduct of digging is piles of whatever you may be digging, in this case marsh. These "mounds of marsh" were simply tossed aside blocking the natural water flow.

The manmade canals also enable saltwater from the Gulf to creep into the marsh. If you have taken a biology course, you will probably conjecture saltwater colliding with life forms accustomed to less salty water equals problems for that life, and you would be right. The freshwater vegetation dies from exposure to saltwater meaning the root systems holding the land together are gone; thus, coastal erosion occurs. Coastal erosion has already washed away much of the Houma’s traditional land. Like most, if not all, Native American tribes, the Houma cherish the graves of their ancestors. Sadly, many of the Houma gravesites have been swallowed by the ever encroaching sea. [Update: The previous two paragraphs were edited on 11/18/11 at 3:25 pm to include more detail on coastal erosion.]

Photo: An oil company canal at Isle de Jean Charles, a community on the frontlines of the coastal land loss problem.

If the UHN had been federally recognized when oil was first discovered on their land, many of these ecological and cultural tragedies could have been averted. Groups such as the NAACP have stated oil lobbies do not want the Houma recognized because the land would be protected under the federal designation.

Federal recognition gives a tribe status as a sovereign nation. If federally recognized, the UHN would have a strong damages claim against BP; furthermore, the tribe would be eligible for educational opportunities, healthcare, and a myriad of other benefits--including disaster relief. Disaster relief would be extremely valuable to the UHN, as the tribe has been pummeled by Hurricanes Katrina, Rita, Gustav, Ike and the BP spill all since 2005. Additionally, federal funds would likely be available to protect the tribe's land from coastal erosion.

The UHN currently has a petition before the U.S. government for federal recognition. Anyone 13 years of age and older can help the Houma and be a part of history by signing the petition. More information can be found at this link.

Adam Crepelle is a citizen of the United Houma Nation. He serves on the tribe’s Tribal Security and Community Services Committee and the tribe’s Diabetes’s Coalition. Adam received his degree in exercise science from the University of Louisiana Lafayette in 2009. He is currently in his second year at Southern University Law Center.