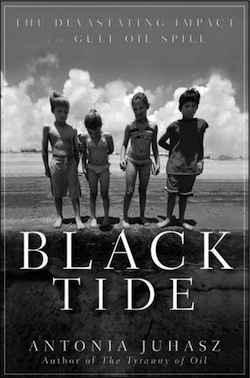 When the BP oil disaster began, writer, activist, and oil industry expert Antonia Juhasz traveled to the Gulf Coast, where she followed the response efforts and interviewed dozens of government officials, community leaders, fishermen, scientists, and coastal residents. A year later, Juhasz published the result of her investigation in a book:  “Black Tide: The Devastating Impact of the Gulf Oil Spill.”  She recently talked to Bridge the Gulf about the BP disaster, why it will happen again, and how she’s challenging the myths of the most powerful industry in the world.

Q: What are the main myths that BP and the oil industry have been putting out?

The primary tactic that the industry has used is to say this was an isolated incident, a fluke thing for BP.  And that the impacts of the disaster have not been deep, they have not been long lasting; things will get back to normal.  They also say that if you try to do anything about it, you are hurting jobs.

Q: And how do you debunk these myths in your book?

The main facts that debunk that are, first, the oil industry provides far less jobs and far less of an economic contribution to the region than people are led to believe.  About 8% of the GDP of Louisiana is attributed to the entire oil industry, as opposed to “petrostates,” like Angola, Nigeria, and Iraq, where the oil industry is 80-90% of the GDP.

Secondly, it has been absolutely proven without a doubt that this is not a singularly BP problem, this is a problem for the entire industry. This is systemic. It is endemic.  It can happen again.  It will happen again.    We have no regulatory capacity, and the industry won’t regulate itself.

Q:  How does that 8% of the GDP from oil industry compare to tourism and the fisheries in Louisiana?

For the fisheries, it is hard to come by employment figures and it is even harder to come by revenue figures.  But we know for certain that there are competing industries that can be counted on, that can replace the benefits of the oil industry.    This is a primary heartland for the fishing industry in the United States. 70% of certain species come from here.  And whether there is a spill or not, the oil is bad for the fish.  So we are harming one very strong, competitive industry.

But instead of supporting the alternative industries, you’re actually harming them by focusing on oil production.

In 2009, 7 of the 10 largest corporations in the world were oil companies.  They got that way through mega-mergers, and some of those mega-mergers happened after huge traumas in the industry (like Exxon being allowed to merge with Mobil after the Exxon Valdez spill).

The profits of the industry are just utterly unequal.  Exxon Mobil in 2008 earned $45 billion in profits.  The largest company in the world, based on revenue, was Walmart, but it’s profits were $11 billion – a quarter of Exxon’s profits.   There’s absolutely no comparison. 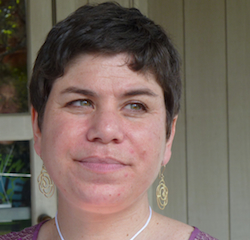 BP’s revenues were $239 billion last year.  That’s larger than the GDP of all but 32 countries on the entire planet.  And BP is only the 3rd largest oil company in the world.

Revenue is a useful figure because it is relative to the economy, but profit is way more important because it is excess cash.  And what oil companies are doing with the excess cash is breaking all of their records in spending money on lobbying, on campaigns, and on advertising.

What this spending has done is just create this weight of pressure on people who want to become elected officials, or want to hold onto their offices, to which we have yet to create a people-powered counterweight.

And we were fractured, as an environmental movement and a people’s movement, as a result of this spill. And we just didn’t counter the pressure from the oil industry.  Not a single piece of legislation– not a one – that was written in response to the BP disaster has become law.

Q: In your time on the Gulf Coast, what have you seen in terms of a people’s movement?  Are we getting there?

The rest of the country doesn’t understand how much oil is still here.  We don’t see it, we don’t know.  We don’t understand really what we’re supposed to be advocating for on the Gulf Coast’s behalf, and so, we haven’t.

Q: What analysis does your book provide for people on the Gulf Coast, who have lived through the BP disaster?

When you are in the midst of an oil disaster you are often overwhelmed by the circumstances.  You are shut off from access to information, which is being limited by the most powerful industry in the world.  It can often feel incredibly isolating.    What I hope to bring is access to information, simply by knowing where to dig. And to counteract, head-to-head, the lies that the industry puts out.

That’s information I’m able to provide from being on the Gulf Coast and spending time with people, but also from years of working with oil-impacted communities, and knowing the challenges they face.

Q: Why should people read your book, “Black Tide: The Devastating Impact of the Gulf Oil Spill”?

I think what I’m so proud of about the book is that it tells a very human story about tragedy, and it is incredibly hopeful.  It is filled with people who have withstood tragedy, and are organizing against it, demanding changes.  And the book provides tools for more people to join that fight.  It provides information that is necessary, and the inspiration of tragedy and people overcoming tragedy that makes you feel like you can engage with it.

Q: Who are some of those Gulf Coast people that we can look forward to in your book?

Gosh, I don’t even know where to begin. The list is so long.

People like Wilma Subra, who has been leading the fight on the impacts of human health; this incredible young man, Truong, who’s a second-generation crabber, whose mother almost gave birth to him in a crabbing facility.  When he was four he started working next to her.  He’s an Iraq War veteran who left to fight the war and came back because of Katrina.  He was going to go back, and then the oil spill hit.  Now he is working at Boat People SOS (a Vietnamese American nonprofit organization) and trying to change things in his community.

Oceanographers like Dr. Samantha Joye, the oil plume raider, going head to head against NOAA and the administration and BP; Casi Callaway, an environmentalist trudging all over beaches; Tracy Kuhns; Riki Ott;  People from fishers, to environmentalists, to oceanographers, to activists, to D.C. policy makers, to fishers-turned-protestors like Diane Wilson.

There are people from every corner of the disaster, tirelessly fighting to make it right.