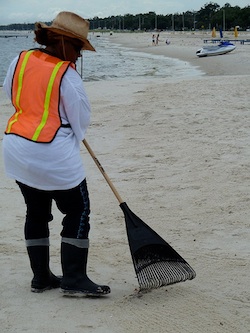 Editor's note: Today, a guest blogger explains some of the legal obstacles and opportunities for whistleblowers in the BP disaster. Lindsey Williams of the National Whistleblowers Center describes how a law signed by Abraham Lincoln could be used to protect whistleblowers on the Gulf Coast, and make negligent corporations pay.

The timing is fitting: it is one year after BP finally stopped the flow of crude oil from its deepwater well. And in the past year,  thousands of BP clean-up workers have joined the ranks of others in the oil, gas, and chemical industry who see safety and environmental abuses with shocking regularity.

BP clean-up workers are barred from speaking to the press, told they would be fired for wearing respirators and other safety gear, and now many are now facing illness and even death from toxic exposure.  But many still fear the repercussions of speaking out.

Photo: A worker rakes up tarballs in Biloxi, Mississippi on July 5th 2010. Photo by Ada McMahon.

As President Obama said during his campaign “workers are the eyes and ears of enforcement.” They are the ones who see companies dump toxic chemicals into the water, misuse oil rigs in ways that ruin the blow-out preventer (BOP) or ignore fire hazards. Employees who witness blatant disregard for environmental and safety regulators every day must be encouraged to report these violations and must be protected when they do.

However, the environmental statutes are painfully out-of-date when it comes to their whistleblower provisions.  Eight federal environmental and safety laws still have a 30-day statute of limitations. In the real world, this means that by the time most employees contact the National Whistleblowers Center (NWC) or another attorney, it is too late for them to file a case. What’s even worse is that one year after BP shut off the gusher of oil into the Gulf, Congress still has not passed whistleblower provisions for any of the laws that govern offshore drilling (mainly the Outer Continental Shelf Act, the Oil Pollution Act of 1990 and the Endangered Species Act).

Additionally, Congress has not passed amendments to the Whistleblower Protection Enhancement Act that will protect and encourage federal employees to speak up for safety and compliance.

This all sounds pretty doom and gloom, but all hope is not lost for these whistleblowers. They may be able to achieve whistleblower protection under the strongest whistleblower law in the United States – the False Claims Act (FCA).

The FCA was signed into law in 1863 by President Abraham Lincoln to detect and deter fraud against the federal government. In a June 15, 2010 letter, the National Whistleblowers Center (NWC) explained how environmental organizations and whistleblowers can use the FCA to go after environmental violators. For example, the government could use the FCA to go after BP for “misrepresentations about its safety and emergency response procedures in order to operate under leases from the United States and profit from offshore drilling.” Assistant Attorney General Tony West responded to the NWC’s letter and confirmed that the U.S. Department of Justice was "considering all avenues of redress against the potentially responsible parties."

Environmental groups and whistleblowers can also use this law. The FCA allows the “relator” (i.e. whistleblower) to file the case on behalf of the federal government. This means that one does not need the government to intervene in order to proceed with the case.

Why is the NWC encouraging the use of the FCA to go after environmental violations? There are four reasons. First, treble damages (i.e. triple damages) are levied against the defendant. The company will have to pay the government and taxpayers three times the amount of the fraud they committed. Second, the whistleblower receives as a reward 15 to 30% of whatever the government recovers.  Third, the company often enters into a complex agreement that prevents them from committing similar violations in the future. Fourth, large FCA decisions will have a deterrent effect on other companies whose operations could damage the environment.

So, what’s next? Environmental and community groups can learn about the FCA and assist the NWC in educating the public about their rights. The NWC has advocated for environmental and nuclear whistleblowers since 1988, but we cannot do it alone. We need to work together to protect the people who put their careers on the line to enforce this country’s environmental laws.

The NWC held a training seminar on this topic last year in Washington, DC and we hope to hold another one soon. Please subscribe to our Action Alert Network if you would like to learn more about this seminar and become involved in protecting whistleblowers.