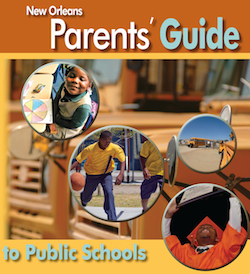 As the parent of a New Orleans Public School student I can tell you, the reality of sending your child to school has completely changed from when many of us were growing up. When I was a kid, we went to our local neighborhood schools. In New Orleans, since Hurricane Katrina, just sending your child to the closest school is no longer an option. Once a child reaches school age, parents have to walk through a maze, from different registration and application processes; different school calendars; different eligibility requirements for students; to different interventions and services for children with special needs (for schools that have them at all.)

Puzzling through the confusing and very long list of “options” is a frustrating and time consuming process for even the most patient, well equipped and well informed parent. But without one basic tool, I think it would be nearly impossible. That tool is the New Orleans Parents’ Guide to Public Schools, published and distributed by New Orleans Parent Organizing Network.  This combination catalogue and guidebook comes out every February, in time for students to review before the application deadlines for many schools.

Parents: This year the Recovery School District (RSD) has a unified application, due on March 31st: http://www.rsdla.net/enrollment.aspx. (This is only for RSD schools, for other schools' enrollment information visit NOLAPON.org.)

The 6th edition of the Parents’ Guide just came out, so I sat down with my friend Aesha Rasheed, the publisher of the Parents’ Guide, and the founder and former Executive Director of New Orleans Parent Organizing Network. What was going to be a 20-minute interview turned into a fascinating hour-long conversation about the history and broader landscape of public education in New Orleans. Both of us are outraged about the continuing racial and socio-economic disparities that have persisted in Education and impact the larger community in a myriad of ways, but first I wanted her to explain how we got to where we needed a Parents Guide. Here’s part one of that conversation.


Will you please tell me what the Parents’ Guide is?

The New Orleans Parents’ Guide to Public Schools is an annual book to help parents understand the landscape of public schools in New Orleans, get some basic information about what schools are open, where they are, what kind of programming they provide, what kind of student population they serve and what their academic performance is. Parents can use it to inform their choices and compare and contrast what is happening at different schools. It is also meant to be an advocacy tool, to hopefully raise the level of parent dialogue about what quality looks like at schools.

How did the parents guide come to be? This is the sixth edition, right?

This is the sixth edition! I was education reporter in New Orleans before the flood. After Hurricane Katrina and the flood, as people were trying to figure out returning and rebuilding, I got lots of questions from colleagues, friends and neighbors, who knew that I knew something about schools. They were like, "Is this school open? I've heard such and such. I heard Capdau is open. Is that true? But I went by the building and it looked like it was flooded."

By then there'd been such massive change in schools, and most schools were still closed. Even schools that were open weren't necessarily open in the buildings that they used to be in.  As I tried to just find one list that had all the school names and addresses and phone numbers, I couldn't find that. There would be a little piece here and a little piece there but everything I found was pretty full of holes and errors.

And as I made that chart I realized that if it took me this much time and that much energy to try and get it clear, it would be really hard for anybody else. There needed to be some kind of central tool. 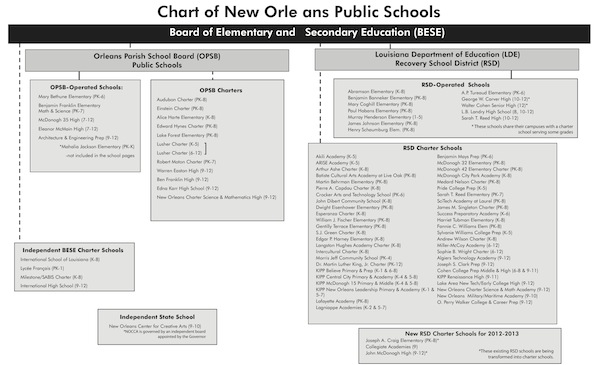 Meanwhile our organization at the time, which was called New Orleans Network, was convening people who were doing work to rebuild New Orleans and defend the right to return, especially for the folks who were the most marginalized and the people who were most likely to be pushed out of the city. We were convening people to talk about different areas that we needed to "skill up" around and talk about sharing tools and advocacy and organizing strategies.

I convened an education advocates circle and the thing that came up that was needed to bolster everyone's work was just that, a book, a list, information about what schools were open. New Orleans Network set about trying to do it. I was able to build relationships with other organizations that were also interested in it, and had enough money to print it as a book.

But why were things so different? It wasn’t just the Hurricane, right? A lot of changes had begun before the storm. Can you talk a little bit about the landscape of education before Katrina?

Part of what was happening in New Orleans Public Schools before Katrina is that there were very significant inequities. There were a few high performing schools in New Orleans. In fact, the highest performing schools in the state were here. But they were selective and very few kids could get in to them. They were also the only schools that were ethnically or socio-economically diverse at all.

The vast majority of the schools were incredibly homogenous in terms of race, all black, and in terms of class, quite poor. Most of the folks who could scrape it together to afford to send their kids to non-public schools had done that, if they couldn’t get into these few public schools that were considered decent.

And all of that created an environment where there was general disenfranchisement with public education.  The conventional wisdom was that schools in New Orleans sucked. They were bad and they were never going to be any good.  And that the kids who went to them were not valuable, this was the undertone of that message.

There was a big piece that the paper did before my time looking at how many kids were graduating and applying for jobs who couldn’t spell New Orleans, for example. New Orleans and Louisiana had one of the lowest adult literacy rates in the country. Real kids were having real problems getting what they need to make it in the world. So there was this rock and hard place situation.

In the 5 years before Katrina, we had a revolving door of superintendents. There were 10 superintendents in a decade, different people leading the district. And what came with that was different policies, new layers of administration. That created a condition where there was mass instability. There were massive levels of corruption, so that by 2005 the F.B.I. had actually established a field headquarters in the Orleans Parish School Board office.

Meanwhile the state had introduced an accountability system.  It was actually ahead of No Child Left Behind [George W. Bush’s 2001 education reform bill], which is based somewhat on what was happening in Louisiana. So standardized testing was offered up as the answer.

Schools were being labeled as failing. Already the word on the street is that the schools are bad. But then annually you have the reports coming out, here are the schools that are failing, here is how bad they are. I think it numbed everyone into thinking, “It is just a failed system” Add to that continuing news of this corruption so that no matter your political perspective, what you are hearing is that it’s a mess.

So that when the [state's] intervention was presented, “What if the state came and took over the schools?” I think a lot of people were basically like, “Sure.”

They were not saying, “Oh, the state does such an excellent job of dealing with schools,” or of doing anything. People actually had a deep distrust of Baton Rouge. But this system had become so neglected and so shriveled and so maligned, and actually was quite bad, folks were like, “Even you can’t make it worse.”

All those conditions led to a situation where immediately before Katrina the state had moved to take over 5 failing schools. It was supposed to be a small, controlled experiment:  “We’re going to try 5 schools, we’re going to give them to a local university who will intervene and try to make improvements and we’ll see how this works. We’ll incubate them, we’ll take care of them like preemie newborns and give them all the supportive systems that they need. And then when they are ready, we’ll return them to the local district.”

Ok, so it was actually about to start…

And then Katrina happens. And again, the local school district was essentially bankrupt and under investigation. There was a chaotic situation, it lacked leadership and this law had been passed to allow the state in. And there was massive turnover on the school board too.

And so this led to the situation where, come August 29, 2005 this horrible, man-made disaster happens and by fall, Orleans Parish School Board was saying, “We don’t have any money; we will not be opening any schools this year.” That met with people who were back, especially on the Westbank and especially in Uptown saying, “What do you mean you’re not going to re-open the schools?” So it opened this door politically for people to be like, “Well if Orleans Parish School Board isn’t going to open schools, then let’s do something else.” And so the Recovery School District (RSD), or really, the state legislature, in that political moment, said “Ok, we’re going to change the rules.”

So that at the end of the day what got moved over to the RSD was about 128 or 130 schools.

The RSD was never designed to run schools. It was supposed to be a holding bin that then farmed schools to a charter school operator, either a university or another non-profit organization. But the mandate post-Katrina was to actually open schools.

There was this moment where lots of kids were put on a really long waitlist because the district was like, “We literally don’t have any more space in a building anywhere.” Which was illegal and is outrageous. It was the wrong answer. And also, physically, there weren’t buildings. There was a ramping up of trying to get staff and open up so many schools really quickly to take in the kids who were returning.

Meanwhile, the OPSB was slowly going about reopening schools and indicated that it would be many months before that happened, possibly one entire school year.  The administrators of their schools or some collaboration of administrators and some parents were like, “Well if you aren’t going to open us under your authority now, we're going to open ourselves and we’re going to demand to be a charter school.”

So that brings us to creating the Parents’ Guide. Most New Orleanians were not aware of the small experiment.  They may not have been aware that there were charter schools happening at all, or what the Recovery School District was.  Before Katrina it was such a small thing in grand scheme of schools in New Orleans. Then suddenly the RSD is the district, it basically is running all the schools.