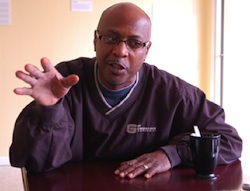 A Talk with John Thompson, by Jed Horne, Crossposted from The Lens.  John Thompson knows the streets of New Orleans. He also knows the state’s prisons. He was one of several defendants railroaded to death row during Harry Connick’s 28-year tenure as Orleans Parish district attorney. Thompson’s conviction was set aside after it was discovered that Connick’s assistants had unconstitutionally suppressed evidence favorable to the defense. Thompson initially was awarded $14 million for the wrongful conviction, only to have the money denied him by the U.S. Supreme Court. Today, Thompson is the founding director of Resurrection after Exoneration, which serves former prisoners trying to rebuild their lives. His office on St. Bernard Avenue includes a residence, computer training and a printing operation (posters, T-shirts and the like) that generates revenue for the group. Thompson plans a larger residential structure and is about to begin a national campaign that would, among other reforms, make prosecutors liable for their misconduct, just as incompetent defense attorneys and bad judges are. (DA’s are currently exempt.) With violence resurgent in post-Katrina New Orleans, The Lens joined Thompson for a free-wheeling conversation about the whys and wherefores of the crime epidemic. With his cooperation and approval, the exchanges below were rearranged, edited and condensed for clarity, brevity and readability. The conversation started – and ended – with Thompson offering his views on the root causes of the crime explosion:

Thompson: Our city is devastated by crime, but also by the criminal justice system. From the police all the way to the District Attorney’s Office, we’re being devastated. We don’t know who to trust. We’ve got a city with no sense of responsibility, no accountability.

We went from giving a junkie – a man that got strung out on heroin – two, three years in federal prison, to life in state prison. Then we went to creating career criminals – three strikes and you’re out. Harry Connick (who left office in 2003) was proud to say he hadn’t opened up a law book since 1973. From the moment he took office, he was telling us, “Y’all elected me. Forget my responsibilities to y’all as a citizen. I’m a politician, not a district attorney. I’ll hire other lawyers to do that. I want to win elections. That’s what I’m here about. I’m here about stiffening sentences.” And that’s what he did.

The dream was putting away hardcore criminals. But the bottom line is we were convicting the wrong men. To keep you quiet, the only thing Connick needed was a conviction rate. And to keep the conviction rate high, he needed to fill up the parish jails.The man filled the jails up so fast (former Orleans Parish Criminal Sheriff Charles) Foti didn’t know what to do. Before Foti could finish one he was already asking for money for another.

Everybody knew what was going on. It was lock them up, throw away the key. And the community that was being targeted, the one with the biggest bull’s-eye on it, was the African American community, Central City, Orleans Parish.

The Lens: That’s where you grew up, right?

Thompson: I grew up on Euterpe between Baronne and Carondelet: dope, drugs, prostitution, everything – on either corner, Carondelet or Baronne. I was part of the last generation. I was like the oldest grandchild. People in their middle years had got out or were dead or in jail. Everybody else was children. Children and their grandparents, and the grandmothers were getting on in years. They couldn’t really keep up with their kids.

The Lens: But those neighborhoods had been intact a generation earlier, poor but intact. What went wrong?

Thompson: There was a change in the way we communicated with parents. We went from you could whup my ass, you could call my mama, and she gonna whup my ass when I get home … We went from that to kids saying, “You touch me and I’ll call 911!”

So now you’ve got no respect. These mamas and papas are scared to death of their own children. Especially if they’re doing anything that might be deemed illegal. These kids are so smart they’re holding you hostage now. Sixteen years old and he’s coming in after midnight – you can’t lock the door and leave him on the street, so you let him in.

I never heard so many kids disrespecting their parents in my life. I didn’t dare raise my voice or curse around my mama, grandma, or anybody. Now, you can’t even tell who’s the child and who’s the parent. We lost that structure, and instead we got babies having babies. We need to address that.

Read the rest of this article from The Lens.