A Gulfwide Gathering to Discuss Progress and Ongoing Disasters 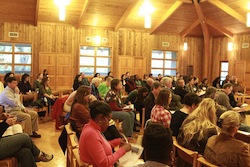 Last week, roughly one hundred Gulf Coast concerned citizens, advocates, environmentalists and scientists came together for the third Gulf Gathering since the first held in October 2010 not long after the BP oil disaster. That 2010 event, held at Weeks Bay, Alabama near Gulf Shores, gave birth to the “Weeks Bay Principles,” which set goals for Gulf Coast restoration, especially in light of the BP disaster.

Not only that, it brought dozens of Gulf Coast social and environmental justice organizations together on one accord, to define, from a community standpoint what a healthy Gulf should be. The popular slogan, “The oil is still here, and so are we,” also surfaced from that gathering.

Photo from the 2012 Gulf Gathering courtesy of the Gulf Restoration Network.

Last week, dozens of organizations came to the same Weeks Bay camp to proclaim that they were still here and down to fight for a healthy Gulf. They came equipped with stories, pictures, videos and reports showing that the oil disaster still continues, and there’s still much work to be done in restoring the Gulf Coast. During the days we were at the Gulf Gathering, the specter of the civil trial between BP and all the parties they aggrieved from the federal government to fisherfolk, hung over our heads. A settlement was largely inevitable, and on the last night of the Gathering, the judge in the trial ended up delaying it to accommodate a settlement.

A settlement wasn’t exactly good news for the folks in attendance (a partial settlement was eventually announced; not everyone was happy) it didn’t discourage the goodwill and hardwork that Gulf Gatherers agreed must continue to strengthen the resilience of the Gulf.

Bridge the Gulf teamed up with the Institute for Southern Studies and The Gulf Coast Fund to interview those in attendance about the state of the Gulf and their organizing.  The thoughts of these organizers and advocates will come out in a report in April, but here's a taste of what people said about the Gulf Gathering:

“[The Gulf Gathering] is an opportunity to work in coalition with our other organizations doing the same type of work, and it’s an opportunity to better understand what those groups are doing and where we can plug into that work. I think that it’s when we can work together that there’s more strength in the work that we do. So I'm happy for that opportunity.

“The reason I decided to come to the Gulf Gathering is that when I read the list about the environmental justice groups -- the Sierra Club, and the Riverkeepers -- all those people can help me complete this coastal restoration piece that we’re trying to learn about. So if I missed this I wouldn’t get the knowledge that I need to carry on. So that’s why it’s so powerful for me. If I missed this and only got the notes, then I wouldn’t feel the love in the room, and the connections in the room, and the voices in the room. Nor could I take back the resources and the people with me -- in my heart -- and say, “I’m gonna help you. I’m gonna put you in contact with somebody who can help you really well.” I appreciate this so much because this is a start for Biloxi, Louisiana, and Alabama to be a collaborative again like we were in the beginning -- and we should never leave that core.”

“This is my first time at the Gulf Gathering. I knew of the work, and part of that is because some of the people who are here, who are convening it continue to partner with us. So, for example, Raleigh Hoke is the Mississippi organizer for Gulf Restoration Network and I work with him pretty much throughout the year.... We're going to be doing a forum about the RESTORE Act next week as part of our coalition meeting, and many of the people here are going to be on that panel. So things like that and these kinds of convening keep us informed about the issues, and continue, to provide us with a source of expertise when we want to bring this information to the community.

“I'm not from this area, I'm from Virginia.  And before becoming involved with the Mississippi Center for Justice, I really didn't realize that, for instance, that the recovery from the oil disaster was still going on. You know, after the well was capped, we just assumed everything was ok.  It was very surprising to me when I was learning more about the process and the issues people are still having, even today, with recovering from the oil disaster, and the Gulf Coast economy recovering from the oil disaster. It's very surprising to me.  So I think that the nation at large needs to know that it's not over.”