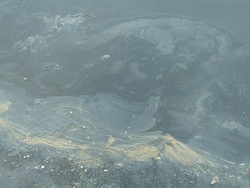 Joshua Pelletier, Gulf Coast Fund Community Renewal and Ecological Health. While Hurricane Isaac will likely make landfall as only a Category One storm, it may cause extensive harm for one unprecedented reason: large quantities of crude oil and dispersants from the 2010 BP oil disaster remain in the Gulf of Mexico.

"The BP crude oil is still very much in the environment and at the subsurface level," said Dr. Wilma Subra, president of Subra Company and technical advisor to the Louisiana Environmental Action Network (LEAN). "The storm surge will likely be carrying oil and sludge, so coastal communities must be careful in the post-hurricane environment,” the chemist told community advocates across the Gulf Coast in a phone conference yesterday.

The Gulf Coast Fund, the regional fund and network founded in 2005 where I work, is urging coastal residents to do everything they can to avoid exposure to BP's oil and disperant, including avoiding touching tarballs, tarmacs, sludge, etc. The crude/Corexit mix contains residual levels of toxic Polynuclear Aromatic Hydrocarbons (PAH's), which humans absorb through skin contact, ingestion and inhalation. The toxic chemicals have been linked to human health hazards such as cancer, nausea, skin irritation, respiratory illnesses, and confusion. LEAN, which is a grantee and partner of the Gulf Coast Fund, advises fishermen in particular to avoid contact with oil, as it could contaminate their seafood catches, nets, gear and traps.

The BP Oil Drilling Disaster discharged nearly 5 million barrels of crude oil into the Gulf of Mexico and resulted in the spraying of more that 1.8 million gallons of the chemical dispersant Corexit (designed to sink the oil). Since the disaster began in April 2010, storm events that were more minor than Hurricane Isaac have surfaced BP's tar balls, tar mats and strings of oil.

Hurricane Isaac may also cause additional contamination to the environment by disrupting oil wells, storage tanks, and pipelines, both on-shore and off across the Gulf of Mexico and Gulf Coast. Advocates identify the Bayou Corne sinkhole in Louisiana as a particular area of concern.

At the Gulf Coast Fund we're asking local residents, if they encounter re-surfaced oil and/or dispersants, to help document it. Please report the location, a description and, if possible, a photo of the re-surfaced oil to me (joshua@gulfcoastfund.org or by calling 504-522-2423). But please remember to stay out of harm's way and avoid handling or breathing in oil and dispersants when possible! LEAN and partners have procured equipment for taking samples for testing, and the Gulf Coast Fund will communicate all information and sightings to LEAN so they can coordinate to get samples. All information will also be reported to appropriate local, state and federal oil/chemical spill agencies, and may be posted to BridgeTheGulfProject.org.

Joshua Pelletier is a student at the University of New Orleans in the Urban Studies Program, and the project coordinator for the Gulf Coast Fund for Community Renewal and Ecological Health. Prior to New Orleans, Josh resided in Masasi, Tanzania as a Peace Corp Health Volunteer.