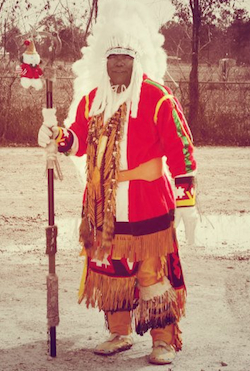 Joe Dardard, a Houma Indian, decided to take action. He teamed up with Toys for Tots and dressed as Santa--with a twist. In addition to the red Santa suit, Joe Dardard donned a traditional tribal headdress. The result, children in the Houma community received at least a moment of joy during the holiday. Over 20 years later, Indian Santa continues to spread Christmas cheer throughout the Houma Indian community. Thomas Dardar, Joe's nephew and Principal Chief of the United Houma Nation, has been serving as Indian Santa for the past seven years.

I produced the film because, although several chapters in books and a few films have mentioned the Houma, all of those pieces focus on the adversity the tribe faces. I wanted to show something genial happening within the tribe.

Just as Indian Santa is a tradition among the Houma, dealing with disaster has become part of the Houma culture as well.

Hurricanes and the BP spill have absolutely crippled many citizens of the United Houma Nation, who primarily work in the seafood and oil industries. This year, Hurricane Isaac wreaked havoc in Braithwaite, Louisiana, a Houma Indian community.

Aside from disaster, another constant is the federal government's persistent refusal to acknowledge the United Houma Nation as an Indian tribe. Houma Indian children were forced to attend a segregated Indian school until 1969; that is, five years after the passage of the Civil Rights of 1964 officially desegregated society. Nevertheless, the federal government insists the Houma are not an Indian tribe.

Federal recognition would be immensely beneficial to the Houma because it would make the tribe eligible for disaster relief programs and funds to help combat coastal erosion. Coastal erosion is major reason recent hurricanes have been unusually impactful. The barrier islands, now vanished, served as a buffer weakening hurricanes before they hit coastal populations – the Houma. Thanks to the vanished islands and shrinking coastline, Houma Indian communities such as Isle de Jean Charles and Point-Aux-Chenes are now the storm buffer.

The BP disaster serves the most obvious example of how lack of federal recognition harms the Houma. In response the United Houma Nation's damages claim, BP replied:

Indian Santa is lighthearted movie. It spotlights something positive happening in a community wrought with hardship. My hope is the film's success will bring interest to the tribe, its ongoing struggles, and support from allies. The more national recognition the UHN receives, the closer the UHN will be to federal recognition.

Adam Crepelle is a citizen of the United Houma Nation. He serves on the tribe’s Tribal Security and Community Services Committee and the tribe’s Diabetes’s Coalition. Adam received his degree in exercise science from the University of Louisiana Lafayette in 2009. He is currently in his third year at Southern University Law Center.