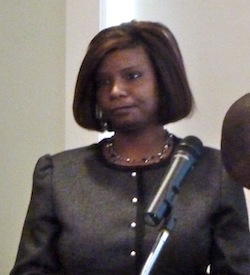 Every year the Greater New Orleans Fair Housing Action Center (GNOFHAC) honors the legacy of Dr. Martin Luther King Jr. by hosting the "Fit for King" conference on housing.  James Perry, Director of GNOFHAC, kicked off the event on Friday, January 13th, by explaining why this year's theme was "Women and Fair Housing":

"Our work over the last year and a half or so made clear that we had to take a look at the role of sex and particularly sex discrimination in our community, and how it intersects with housing.  What happens when you are both a person of color, and a woman, and you are seeking housing in the City of New Orleans, or in the state of Louisiana?  What is your experience?  And of course the reason that we had to take this approach was... because we began to get call, after call, after call from women who were experiencing sexual harassment and sex discrimination all throughout our community..."

One of those women is Shameka Banks (pictured), of Bossier City, Louisiana.  At "Fit for King" Ms. Banks accepted an award for speaking out about the sexual harassment she's faced, and taking on the Bossier City Housing Authority in a lawsuit.

Here's a transcript of James Perry's remarks, as he explained the case and presented the award to Ms. Banks:

"I do a lot of public speaking, and I try most of the time to never read whatever it is that I have to convey to an audience.  But, in making this point, I think it is really important that I read from a letter that we sent to opposing council in a law suit that we have, that you've heard a little bit about during the course of this conference.  If you guys will bear with me, I'm going to read verbatim from this letter.

'In November 2008, Ms. Shameka Banks requested maintenance assistance to repair her kitchen sink.  Danny Smith, a 54-year-old maintenance man, employed by the defendant, responded to Ms. Banks' request.  When Danny Smith finished the work, he dried his hands on Ms. Banks' shirt, fondling her breasts and sexually assaulting her.  Ms. Banks was upset, and told Danny Smith not to do it again.  She said that if he did, she would report him.

'Several months later on March 27th, Ms. Banks called the office of Hall Park for a lightbulb change.  Mr. Smith was sent in to do the work.  Mr. Smith complained that they only change lightbulbs for the elderly, and he called Ms. Banks a 'lazy ass.'  After he changed the lightbulb he proceeded to assault Ms. Banks, again by grabbing her buttocks.  Ms. Banks told him that she was going to report him, and he laughed. He said 'no one will do anything.  Nothing will happen if you report me.' So for immediate relief Ms. Banks reported the incident to the Bossier City Police Department.  She went to the Sheriff's Office that weekend and applied for a restraining order.  The Court believed that Mr. Smith did in fact pose a danger to her, and so they immediately issued a restraining order.

'On the following Monday, Ms. Banks went to the manager of the Housing Authority, and advised them about the complaint with regards to Mr. Smith.  The manager said she was well aware of Mr. Smith's foul behavior, and that she had received past complaints about Mr. Smith.  She advised Ms. Banks to put the complaint in writing.  Ms. Banks also asked to speak to the Directors of the Housing Authority.  She was denied that opportunity.  She asked that her locks on her apartment be changed immediately, because of course, Mr. Smith, as the maintenance man, had keys to her apartment.

'And so in order to fulfill the request, the managers of the Housing Authority sent – guess who– to fix her locks?  They sent Danny Smith to fix the very locks that – he was the cause of the problem, that of course, made Ms. Smith need to have her locks changed.  Danny Smith arrived, calling Ms. Banks obscenities.  Ms. Banks, of course, was fearful for her life and refused to open the door. Mr Smith left....  Following the event, Mr. Smith was finally assigned to a different area.  A few months later he was finally fired, for violating the restraining order by coming to her apartment.'

"Now, Ms. Banks, after going through this experience, called the Louisiana Department of Justice, who did an incredible investigation....  They issued a charge saying that the Bossier City Housing Authority was in fact liable for engaging in sexual harassment, the actions of Mr. Smith.  And they put Ms. Banks in contact with us, and we began to work on her case.  So, of course, this letter is a part of our negotiation in an attempt to settle that suit.

"As we began to investigate, and as we began to get closer in the process of moving forward this case, we met more and more women at the Bossier City Housing Authority who had had similar experiences with Mr. Smith.  And so it became clear that this wasn't a single incident, but something that happened over and over and over again.

"We found a complaint that was lodged by a tenant at the Housing Authority and in the complaint she wrote that 'on the day of National Kids Day, Mr. Danny came at me the wrong way.  Which was totally disrespectful.  Mr. Danny asked me' –she was pregnant– 'Mr. Danny asked me, when I drop my baby, can he f me.  And put one in me again.  And I think that he is out of hand.  I am only 18 years of age, he is old enough to be my father.'

"When she filed that complaint, they did nothing.  They did nothing.  He kept his job.  He continued to operate as the maintenance man of the Housing Authority.  Now, Mr. Smith is no longer the maintenance man at the Bossier City Housing Authority.  And that's only the case because somebody decided to take a very difficult stand.  Someone decided to come forward, knowing that she would be ridiculed, knowing that people would have all kinds of negative things to say.  Knowing that people would attack her for taking this difficult stand.  And so, I'm incredibly honored, to be able to honor Ms. Shameka Banks for coming forward, for mounting this complaint, and for being an incredible voice of courage in the state of Louisiana and in our community.  Ms. Banks, if you would come forward.

"You know we have, unfortunately, a lot of cases that have facts, that often times are similar to this one.  And one of the difficulties is that a lot of times, with reason, people when filing these complaints want to be anonymous.  So I can't tell you how big of a deal it is that Ms. Banks came front and center.  She participated in a news conference in Shreveport and answered questions for the media, and said 'here's what's happening.'  And she clearly is an inspiration, I think to all of us, but particularly to the folks in our office.  And she lets us know that the work we do is so valuable, and that we have to continue this work, no matter what."

Stay tuned: Bridge The Gulf will continue to post excerpts from the Fit for King conference over the coming weeks.