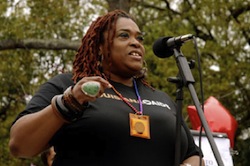 Editor's note: Last week Deon Haywood, the Executive Director of Women With A Vision, discussed how Louisiana's Solicitation of Crimes Against Nature statute allows law enforcement to target poor and trans women of color (read here). The law criminalizes the selling of anal and oral sex, and until recently required people convicted of the crime to register as sex offenders. In comparison, those convicted of prostitution using heterosexual intercourse only face a misdemeanor and need not register as sex-offenders. In March, a federal judge ruled that it is unconstitutional to require people to register as sex offenders under the Solicitation of Crime Against Nature law. This ruling is not retroactive, meaning hundreds of men and women in Louisiana will remain registered as sex offenders, hurting their housing, employment, and other opportunities. In today's post, Haywood discusses what it's like to live with the "sex offender" label, and why the "War on Drugs" is really a war on women.

Photo of Deon Haywood courtesy of Women With A Vision.

Living with a Crime Against Nature conviction

Women who were charged with Crime Against Nature before August 2011 had to register and follow all federal guidelines for sex offenders. Which means they have to pay $500 to put out postcards to tell the community who they are. It also makes it very difficult for them to find a job.

Women on the sex offender registry have a very difficult time getting employment. You know why? Many women are in the service industry. Those are the kinds of jobs that women hold in this city, especially poor women. They cannot get a job in the service industry, because nobody wants them around their children. And they can't be around children, says the law. You can't work at a Burger King because "we have children coming in here, families.” Well you can't clean up in a hotel -- “It’s a family hotel.” So what are women left to do?

When it comes to housing, how many people do you know who want to have somebody who's a convicted sex offender live next to them? And how many people do you think really sit down and ask these women, well why do you have that? Many of these women want to tell people. They carry their court papers everywhere they go.   So one of the things that our clients struggle with when it comes to housing is not being able to get it. Not only can they not get affordable, safe housing, but they can't even get into transitional housing. Because, why? They would have to put out the postcards. And how many transitional houses are in neighborhoods that are safe or have families? So these people don't want them there because they don't want to ruffle the feathers of neighbors. For many of the women we work with, their housing is horrible. I've visited some of them. Holes in the floor, $500, $600 rent. How do you think these women are making the money?

They are at risk every time for arrest, or violating their parole, or to be charged as a sex offender again.

Or women live with men who are abusive, just so they can have a place to stay. And a lot of people won't house them. Family members won't house them, because again, nobody wants anybody to know about the "sex offender" in our family, or that you were a prostitute or a drug user.

And it’s important to know that sex work looks very different for women of color, especially Black women in this city. It is not glamorized like we see on TV.  Women With A Vision partners with some amazing sex workers rights organizations that really are doing a good job, but they are not our women. They are not poor Black women, where a lot of time it’s about feeding my family.   And I tell everybody -- we all are sex workers. We all been one at some point in our lives, whether we want to realize it or not. You don't even have to think about it now. Go sit at home with that glass of wine or a cup of coffee, and you'll see it.

The War on Women

We have polices like the War on Drugs. We’ve got politicians saying they want to drug test women on public assistance, and we're not offering treatment if they test positive. We live in a state where we only have two licensed addiction counselors that cover four parishes. There are not programs in the city that do rehabilitation, to the level we would need, that really deal with the issues that women face when they're homeless, or looking for a job, or subjected to a lot of violence. So how will these women get help? The answer is incarceration.

One of the things I really, really want people to understand is, when you hear all this rhetoric on the television or anywhere in the media about the 'War on Drugs," it really is a war on women.  It's a war on women. We don't have anything in this city that says, "Well, let's try treatment," because Governor Jindal just cut it all in the last two years. We really have none. A place that does harm reduction, that will work with women who are struggling with addiction, and their children, and help them rebuild their families –  We don't have that.   So, many of these women are homeless.

You really have to target the jails, and the amount of money that goes into holding somebody in jail. And the fact that every time these women go to jail, the jail gets paid. We actually had women who had their criminal records expunged -- and we are so excited about that – but it's because the police officers who arrested them are in jail now for falsifying reports, or charged with rape.

They want to drug test women, so they drug test them and they take away their benefits. What do we have left? More homelessness? More children who are homeless, more parents who can't parent? And then women are definitely put in a position where they have to use sex as a way to get out.

Our clients are also recipients of Temporary Assistance for Needy Families (TANF), and as of October of last year, they started coming to our office to volunteer. And they volunteer because these women have to work for 20 or 30 hours in order to get that $138 or $200 cash payment.

Our TANF recipients tell me, “I can't go look for a job, I can't go to school, because I have to come to Women With A Vision, and I have to spend 20 or 30 hours here with you, and when I finish here I have to go pick up my kids. If I don't get my kids and I don't follow these requirements, I don't get my food stamps. I get my foodstamps taken away. I could have the cash benefits taken away, and it’s the only cash I have.” And that's not even talking about women who are HIV positive, many of them who are unable to work.   The system itself is set up for failure. I think many of us know that.

One of the biggest things I think we all try to push is making sure the communities that we work with have information. Many of the women who come in our office, they don't vote. They feel like they are so far removed from everything in this state. Nobody cares about them. Nobody wants to hear what's going on. Nobody cares that they're being beat up.

So these are the kinds of things that I think we really have to work to change. If we don't stand together and try to come up with ways that really focus on these policies that are put in place, then its going to get even worse. If we think that crime is bad now, it’s going to get worse.

The last thing I want to say is, at Women With A Vision when we first started this process about four years ago, when we started targeting the state and the criminal justice system, everybody said that I was committing agency suicide, and that we must be crazy thinking that we're going to fight Bobby Jindal. That's the kind of stuff that has been implanted in the minds of most people, that we can't fight. But we have seen the proof of what can happen when you stand with people.

Previously: How the 'Sex Offender' Label Targets Poor and Transgender Women of Color in Louisiana